Bitcoin price a countertrend move just before November's auction finalized. Still, on-chain metrics suggest the downtrend is not yet over.

Bitcoin price is undergoing a profit-taking consolidation after the bulls prompted a last-minute countertrend rally into the $17,000 price zone. After a weak bearish denial near the aforementioned price zone, the bullish gesture is certainly optimistic. Still, Bitcoin will need to display much more strength as the potential for another move south remains prevalent.

Bitcoin price currently auctions at $16,945. IntoTheBlock's on-chain metrics provide some cues as to what Bitcoin's long-term intentions may be. Specifically, the Inflow Volume Indicator, which accounts for all deposits made on exchanges, has increased by 44% on the month. On November 18, the indicator saw an influx of 165,290 Bitcoin delivered to exchanges. The last time the indicator had a similar influx was on September 14. Back then, 281,230 Bitcoin were deposited to active wallets and exchanges when BTC  traded at $20,000.

In theory, the Inflow Volume indicator is meant to gauge market sentiment and justify liquidity upticks. There is a general bias amongst the crypto community, however, that more deposits of an asset onto exchanges eventually lead to a sell-off. In Bitcoin's case, the last two upticks did result in a 20% decline, although the move south took several weeks to play out. 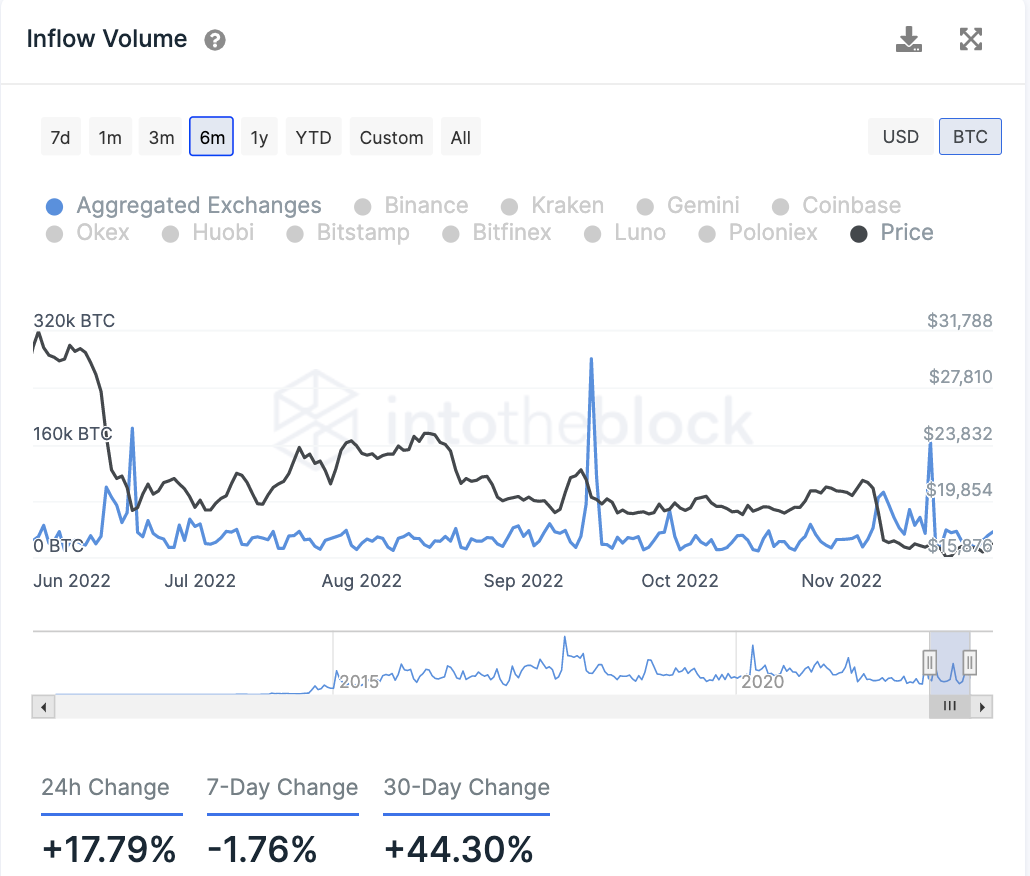 Considering the on-chain metrics, history could repeat itself and a 20% decline would not be a far fetch scenario for the peer-to-peer digital currency. Such a move would land BTC price near the upper bounds of the $13,000 zone,  a price level untraded since 2020.

As mentioned in the Bitcoin's macro thesis established earlier in the year, a breach of the $13,880 price level would invalidate Bitcoin's bull run potential.