Bitcoin appears to be stabilizing above $10,200 despite the news that VanEck has withdrawn its Bitcoin exchange-traded fund proposal. The Securities and Exchange Commission in the United States was preparing to give its final verdict on whether to reject or approve the ETF product on October 18. There are still two more Bitcoin ETFs in review.

Read more: The quest for a Bitcoin ETF dealt a blow as VanEck withdraws proposal

The granddaddy of Bitcoin is showing resilience by ignoring the news of the withdrawal. However, Bitcoin’s performance still trails that of the major altcoins including Ethereum and Ripple. Ethereum managed to rise above $200 resistance an even test $215 hurdle while Ripple spiked incredibly above $0.30. 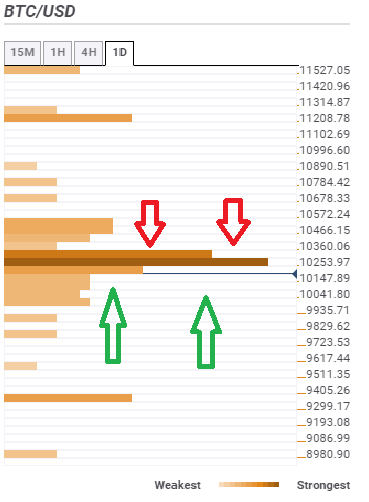 Clearing this resistance will allow the buyers to focus on the next key hurdle at $10,360 highlighted by both the SMA 100 four-hour and the pivot point one-day R2. On the brighter side, Bitcoin path to $11,000 will remain relatively smooth as weak resistance hurdle will be encountered at $10,466 and $10,572.

Glancing lower, support areas are scarce for the largest crypto on the market. Initial anchorage is expected at $10,174. Converging here are the Bollinger Band four-hour lower, Pivot Point one-day S1 and the previous low one-day. Other weak support areas include $10,041 and $9,405.

ETH/USD may return to $220.00 before another strong rally

Ethereum tested $247.93 during early Asian hours and retreated to $247.70 by the time of writing.  The second-largest digital asset has gained about 1% of its value since the start of the day and stayed unchanged since the beginning of the day.

IOTA has announced a major upgrade to its Hornet node software, which is the first performance upgrade in IOTA 1.5. the first in a series of planned protocol upgrades.