Bitcoin price is heavily influenced by liquidity conditions – one of the most important factors in any market. The global liquidity crunch has impacted Bitcoin price in a major way and, as a result, analysts are presenting a bearish outlook for BTC.

How the global contraction in liquidity has affected Bitcoin price

Sam Rule, senior crypto market analyst at Bitcoin Magazine argues that one of the most important factors in any market is liquidity. Liquidity can be defined in many different ways, but the analyst is looking at global liquidity and its impact on Bitcoin price.

One high-level view of liquidity is based on the condition of central bank balance sheets across the world. During recent crises central banks have become primary conduits of liquidity for the economy through keeping interest rates low and buying up sovereign debt, mortgage-backed securities and other financial instruments. Rule argues that this infusion of liquidity has come about, however, from the purchase of assets that are overall riskier in nature. This has led to one of the largest rises in asset valuations globally, over the last 12 years, since the great financial crisis.

Central bank balance sheets in the US, China, Japan and European Union have reached $31 trillion in 2022, nearly ten times their level in 2003. While this is a growing trend for the last two decades, 2020 fiscal and monetary policies in response to the COVID-19 pandemic took balance sheets to record levels. 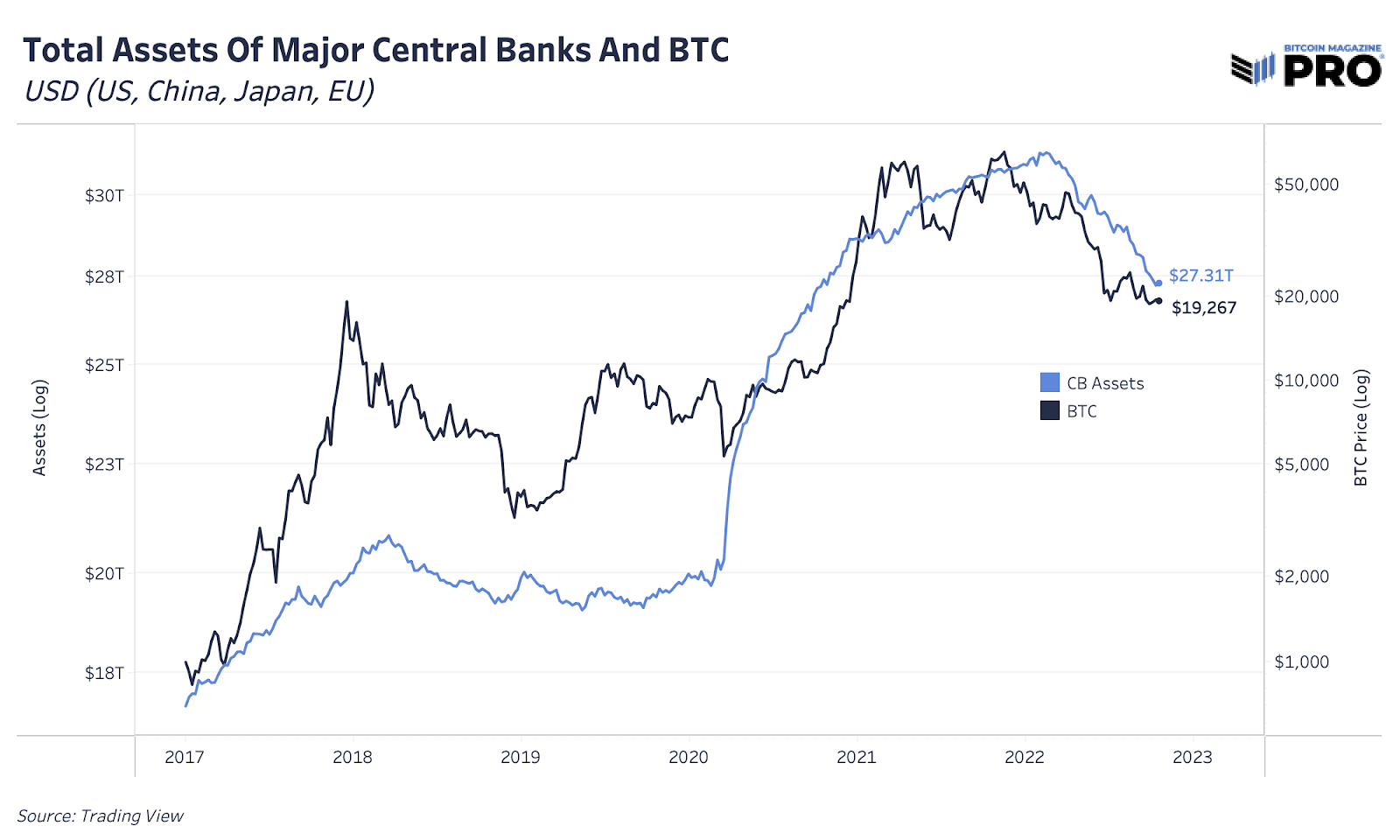 Rule notes that Bitcoin’s new all-time high of $60,000 in March 2021, coincided with an annual peak in the rate-of-change in major central bank asset accumulation.

Since then, however, central banks have reversed their previously expansive monetary policies to fight rising inflation, and now instead of pumping liquidity into the economy are drawing it out. The implication is that this policy reversal has been a major macro-driving force for BTC price’s decline over the last year, as well as volatility in all markets.

NekozTek, crypto analyst and trader, notes that active Bitcoin sales by miners stopped about a month ago. The sale of Bitcoin by miners increases the selling pressure on the asset and adversely affects BTC price. Miner reserves have declined consistently since the beginning of August 2022 and October 13 marks an increase in the reserves. The analyst is bullish on Bitcoin and expects the price to appreciate over the next few months.

Aditya Roy, crypto analyst and trader compared the 2018 bear market to the ongoing Bitcoin cycle and predicted that BTC could bottom in November, hitting the $13,000 level.

Roy identified a support level at circa $18,000 formed by the multiple bottoms touched by price since June 2022. This level, were it to break, would likely see a volatile move south. According to the technical analyst the number of touches a level is subjected to increases the volatility of the final break when it comes, suggesting the risk of an explosive move south if the support zone at at $18,000 cracks.