El Salvador’s move to make Bitcoin a legal tender could spell trouble for the Latin American country and the leading cryptocurrency, according to JPMorgan.

While El Salvador President Nayib Bukele’s initial aim to declare Bitcoin as legal tender in the country was to lower the cost of sending remittances back to the country, the move has ignited debate over the advantages and the drawbacks of the new legislation.

A group from JPMorgan Chase & Co. recently highlighted that El Salvador’s adoption of the bellwether cryptocurrency could see challenges ahead.

Bitcoin trading volumes are usually over $40 billion to $50 billion daily. However, a large portion of BTC remains tied up in illiquid entities, with more than 90% not being moved in over a year.

According to Bloomberg, JPMorgan highlighted that there is a “significant and rising fraction of Bitcoin held by wallets with light turnover.” The investment bank further added that the illiquidity of the nature of BTC volume indicates a “potentially significant limitation” on the leading digital asset’s potential as a medium of exchange.

The Latin American country’s daily payment activity would represent roughly 4% of the recent on-chain transaction volume and more than 1% of the total value of Bitcoin that has been transferred in the past year.

Alongside the US dollar being the other legal tender in El Salvador, the high volatility of Bitcoin is another huge challenge in the country’s monetary system.

El Salvador proposed for the leading cryptocurrency to become legal tender in June. The proposal was approved and the country is now expecting Bitcoin to be adopted in early September.

The new legislation has faced opposition, however, as the country’s opposition party has recently sued the government over the new law, stating that it was unconstitutional. According to a survey by the Salvadoran Chamber of Commerce, 80% of citizens in the country said that they would not agree to receive payments in Bitcoin.

Bitcoin price has been ranging in a rising wedge pattern starting in mid-June, following a period of consolidation that started on May 19.

The rising wedge suggests a prevailing bearish outlook for the leading digital asset, with a measured move of a 20% decline to $27,424 if the pattern is robust. However, this move is unlikely as Bitcoin price would break below the demand zone that ranges from $30,052 to $32,289 and also the 2021 low of $28,120 before the steep drop could materialize. 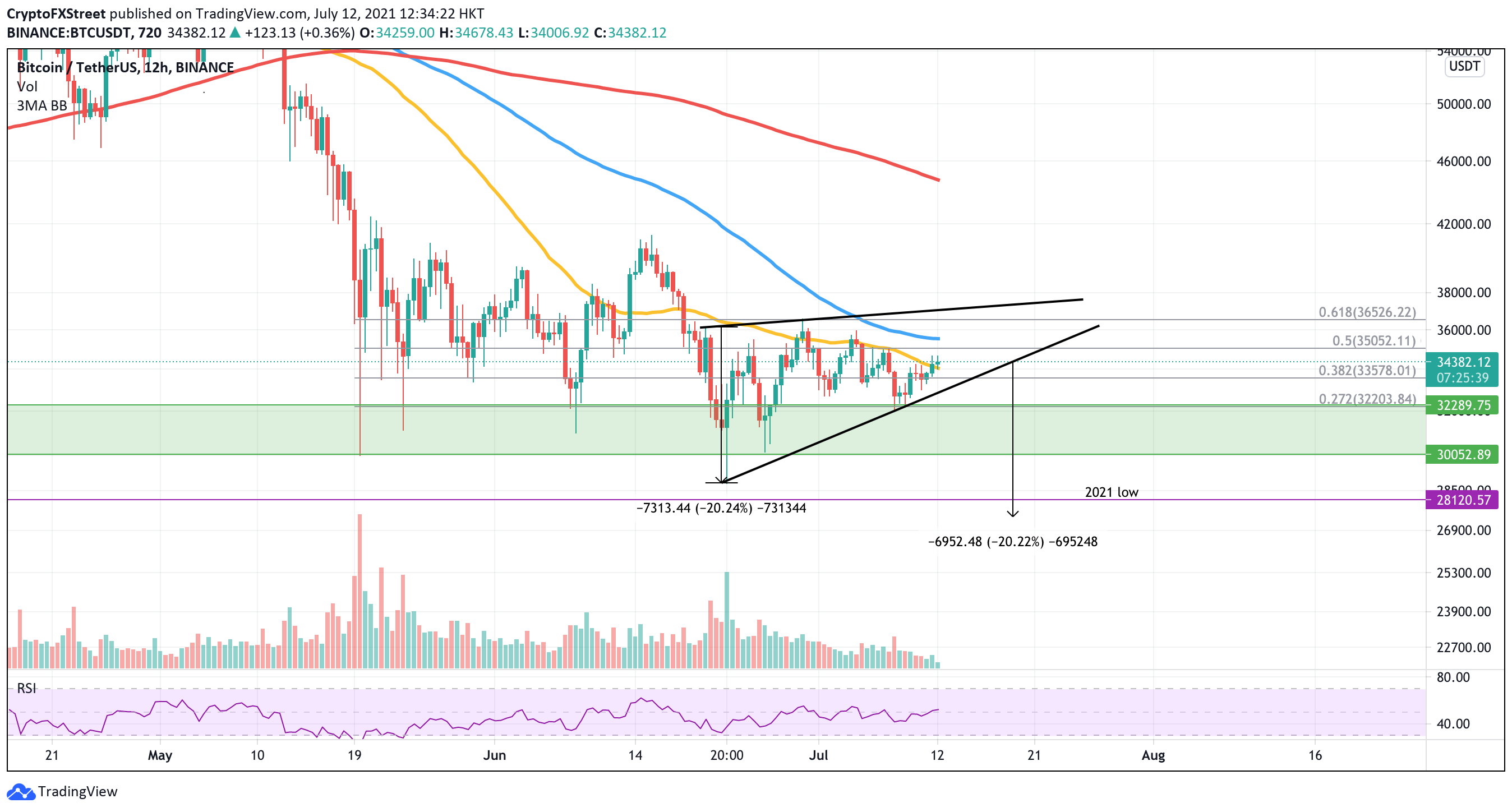 Should buying pressure increase, the bulls can expect BTC to tag the 50% Fibonacci extension level at $35,052. Bitcoin price faces further challenges ahead on the upside, and therefore speculators should expect further consolidation before a stronger uptrend emerges.