Basic Attention Token, like many other cryptocurrencies in the market, is in the middle of a retreat following the losses posted in the first week of September. Although support at $0.22 came in handy, recovery has not been rapid as investors expected. Resistance at $0.28 has continued to give the bulls are a hard time, hence delaying recovery.

Why are BAT large volume holders stocking up?

Santiment, a leading provider of on-chain data in the industry, says Basic Attention Token whales “appear to be back to accumulating.” The large non-exchange wallets are perhaps buying the dip in anticipation that BAT will reverse the trend and embark on a massive rally to $3.5.

$BAT's top 10 non-exchange addresses appear to be back to accumulating. The 393M tokens held is the highest amount in these whale addresses since July 10th. In a 48-hour span, these whales have added ~9% more tokens to their holdings! Watch carefully. https://t.co/qtW5g3mwc8 pic.twitter.com/vX38hoPFIj

For instance, the BAT/USD 4-hour chart's ascending triangle seems to be continuing the downtrend before the pattern. The declines are currently supported by the Relative Strength Index (RSI) as it dives towards the oversold (30 and below). If support at $0.24 caves in, we can expect BAT to extend the lower leg back to September’s support at $0.22. 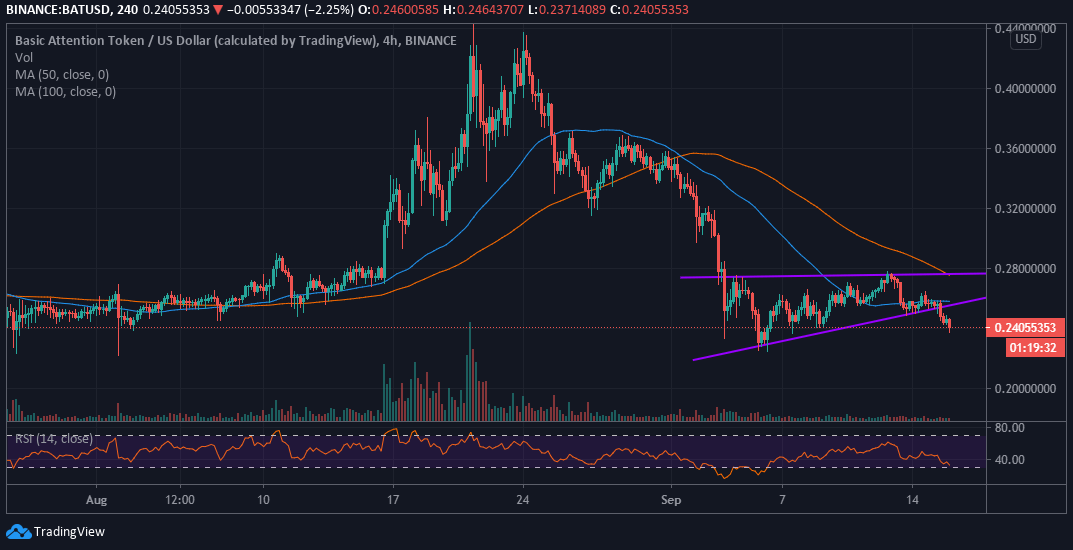 The IOMAP metric by IntoTheBlock highlights the struggle BAT is bound to face in its recovery. The initial resistance at 0.24 - $0.25 seems relatively easy to bring down considering the 12,050 addresses that previously bought 24.82 million BAT in the range. Unfortunately, the price action above this zone will run into extreme selling pressure between $0.25 and $0.26. Only when this zone is flipped into support is that the price can rally to $0.35.

The decrease in the number of new addresses also validates the bearish notion. IntoTheBlock shows that the new addresses created on the network dropped from 1,170 on September 13 to 966 on September 15. The downward trend signals a higher probability of continuing bearish price action.

Although most of the indicators are bearish for BAT, there is a likelihood of the whales currently accumulating becoming the ultimate winners, especially if the double-bottom pattern in the hourly range comes into play as expected. Support at $0.24 will have to hold water while bulls shift their focus to the critical resistance between $0.25 and $0.27. The short term recovery is also highlighted by the Relative Strength Index (RSI) as it moves closer to the midline.