For many investors, the journey has been far from the epic picture painted by the founders of some meme coin projects. As for Dogecoin price, its association with Elon Musk is more or less a bittersweet relationship.

In the past, Musk’s mentions of Dogecoin have sent the token up in double-digits. However, his impact appears to have waned over time, and his tweets no longer trigger overnight rallies as they used to.

On the other hand, the larger crypto market is concentrating on finding a solid footing to end the downtrend and launch another bull run. Hence, the need to investigate the state of Dogecoin price and whether it has the potential to reverse the trend significantly.

As per market capitalization, the crypto industry’s largest meme coin recently eked out a bullish divergence. This allowed buyers to capitalize on the support formed by the 50-day Simple Moving Average (SMA). A break above $0.0700 not only propelled Dogecoin price to deal with the seller congestion at the ascending triangle’s hypotenuse but may mark the beginning of a 26.23% breakout to $0.0888.

Ascending triangles are highly bullish and signify the transition from a downtrend, a consolidation period and finally, a bullish reversal. 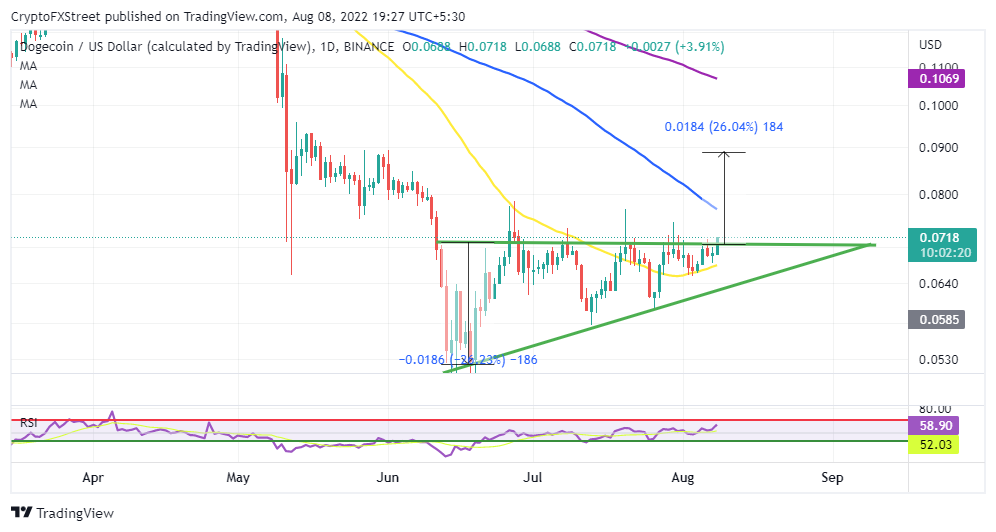 Billionaire investor Mark Cuban has narrowed down on why he believes Dogecoin has more potential applications than Cardano, despite the latter being a smart contracts platform. Cuban explained in an interview with Altcoin Daily that he does not think market capitalization accurately indicates the value of crypto projects.

“If you do enough staking, and you have enough inflation, and you can stake enough that people don’t sell too much, you’re going to have a big enough market cap,” Cuban said regarding Cardano’s spot in the top ten cryptocurrencies.

Coming back to Dogecoin, the Shark Tank investor reckoned that “DOGE has got more applications potentially available to it than Cardano.”

“The opportunity for Cardano is greater until DOGE becomes a platform for applications,” he added.

The proximity of Dogecoin to Elon Musk is not black and white; it’s a grey area. His association with the project has in the past created extraordinary hype and driven its value to the moon. While some investors made a fortune, many more were caught up in frequent price corrections, leading to immense losses.

On the brighter side, Musk’s involvement in the project validates Dogecoin as a robust crypto project – that is not just about memes and jokes. The billionaire once referred to himself as the “dogefather” and pledged to help improve the network’s technology. Musk believes Bitcoin excels as a store of value while Dogecoin triumphs in transaction capability.