There is a current mainstream consensus that more and larger fiscal spending packages will lead to recovery and runaway inflation. The idea of ‘more spending’ always seems to be the answer. If the $3T spending bill from 2020 couldn’t get it done, then surely a larger spending bill will, or so authorities believe (want you to believe). This has many flaws, one logically just being that if an increase in spending can’t fix the economy, perhaps something is broken that requires more than just spending Although rational, it never makes headway when dealing with government authorities. So, I want to take a look at what happens when the government increases spending over time, because if more spending isn’t leading to growth, then we’ll certainly have a problem going forward.

Now, government spending is necessary especially during tough financial times like the one we’re currently in, in order to keep households and businesses afloat; however, government spending is not what will helps the economy in the long run. In order to recover and grow, private investment needs to pick up, but as long as government spending increases, the more difficult a task that becomes. You have to understand, debt is an increase in current spending in exchange for a decrease in future spending, unless that debt that is taken on is used to generate an income stream that can repay the principal and interest. If you look (below), according to the BIS (bank of international settlements) you can see how much each dollar of debt taken on by major economies has generated in GDP. In the US, from 2017-19 each dollar of debt generated only $0.42 of GDP growth and that number is down over 11% from ten years ago. Now, after the shock our system took in March 2020, that number is likely to be much lower than it was in 2019. Government debt is not generating an income stream that can payoff principal and interest. So, not only are increases in government debt taking vital capital away from the private sector, it is damaging the economy in the long-term because there is not adequate money going towards production that could generate the appropriate income stream. 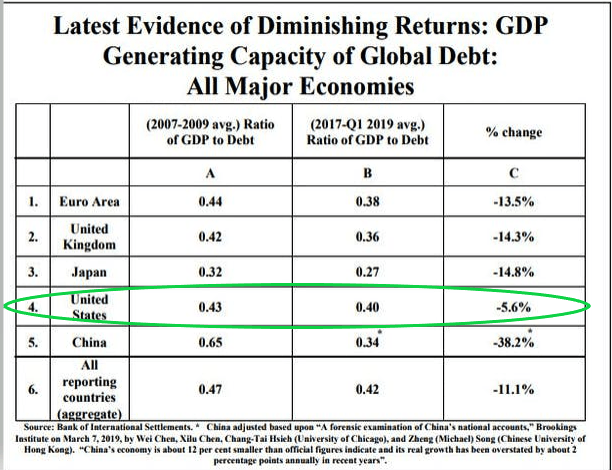 The production function (factors once combined produce real GDP) is determined by technology interacting with the factors of production: land, labor, and capital (debt). If you overuse one of the factors of production (capital or debt currently being overused), initially GDP will rise (Q3 2020), then GDP will flatten out (starting to see), and then GDP will decline if the overuse continues. This is what is known as the law of diminishing returns. As economic growth falls, the rate of inflation does, too. In such an environment, investors are willing to accept a lower rate of return, which is why yields are so low and likely heading lower. If you look (below) at the 10-year yield and its relationship with increased government spending, you can see that over the last 40 years government spending and yields have had a very strong inverse relationship. As government spending increases (slowing growth), yields fall with it. Now, if that relationship stays intact, then as government spending increases (plans for trillions already in the works) then yields will continue lower. What this is suggesting is that further disinflation is coming and since we are already so close to zero, deflation is likely be seen in the next couple of years.

As things are playing out in the market, it can be difficult to identify what exactly is happening and what it means for the future. But, luckily for us, this story has played out before in Japan. The US is literally repeating the mistakes that the Japanese have made (continue to make) for years, step-by-step. From QE (quantitative easing), to QQE, (quantitative and qualitative easing), to record stimulus packages, to larger fiscal spending, to MMT (modern monetary theory), you name it, the Japanese government and the Bank of Japan have been there and done that. Below you can see the inverse relationship between Japan’s government spending and the 10-year yield on Japan’s government bond. Looks similar to that of the US and as you can see, the 10-year yield is just a smidgen above zero, which is where the 10-year yield on the US 10-year note is likely headed. If you look (below) at the second chart showing the inflation rate between Japan and the US, it appears the CPI in the US is following the Japanese inflation rate into negative territory. It shouldn’t come as a shock (but it will) to the Fed and other government authorities when their stimulus fails to produce anything of value in the real economy because the steps they are taking have been taken before and only lead to one place – deflation.

There is substantial risk associated with trading in the financial markets. You are solely responsible for your own financial decisions. Information on Ryan Miller Trading Economics is for educational purposes only. Ryan Miller Trading Economics will not be held responsible for any losses you incur. Ryan Miller Trading Economics does not provide any trading advice and is not a professional investment service. Past performance is not necessarily indicative of future results. There is a substantial risk of loss associated with trading currencies, securities, options, futures, equities and options on futures and currencies. Currencies, Futures, Options, Bonds, Equities and other securities trading all have large potential rewards, but they also have large potential risk and may result in monetary losses. You must be aware of the risks and be willing to accept them in order to invest or trade in these markets. Ryan Miller Trading Economics is neither a solicitation nor an offer to Buy/Sell currencies, futures, options, bonds, or equities. No representation is being made that any account will or is likely to achieve profits or losses similar to those discussed on this website. The past performance of any trading system or methodology is not necessarily indicative of future results.