You don't have to be a fortune teller to predict some of the precious metals’ behavior in the market. Any incoming signs take the shape of a bear.

What a signal-rich week that was! At least if you’re interested in forecasting gold and predicting silver prices.

The USD Index rallied, but that was the least interesting of the important developments, as it had already reversed during the preceding week. So, the fact that the USD Index continued its medium-term uptrend last week is not that noteworthy. 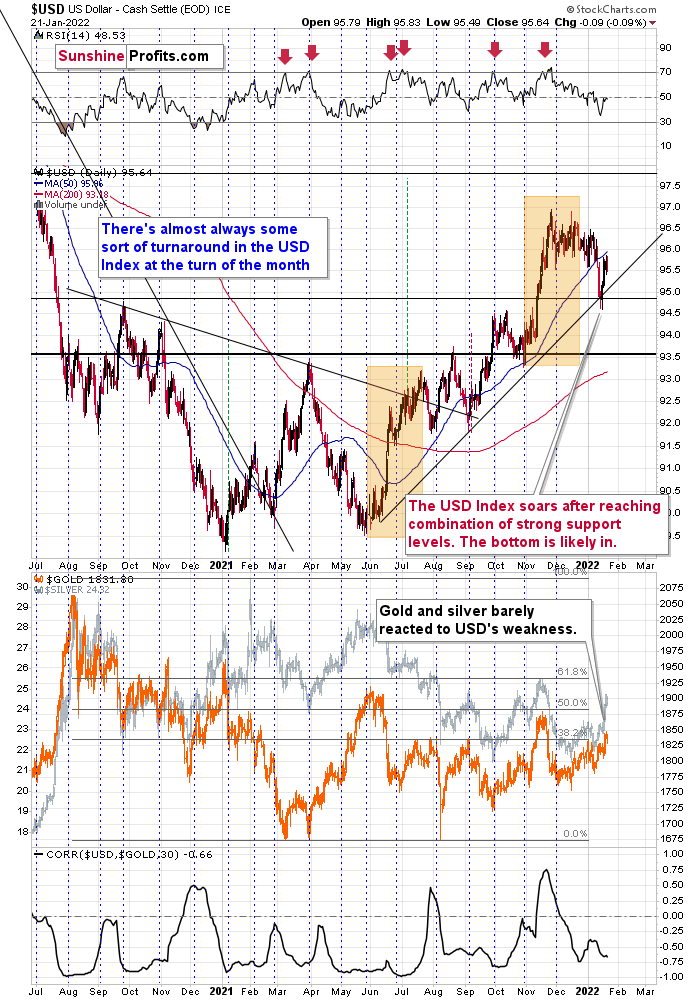 It needs to be said, though, as that continues to be an important factor for the future of the precious metals market. To be clear – the implications for the PM sector are bearish.

What about gold, the key precious metal? 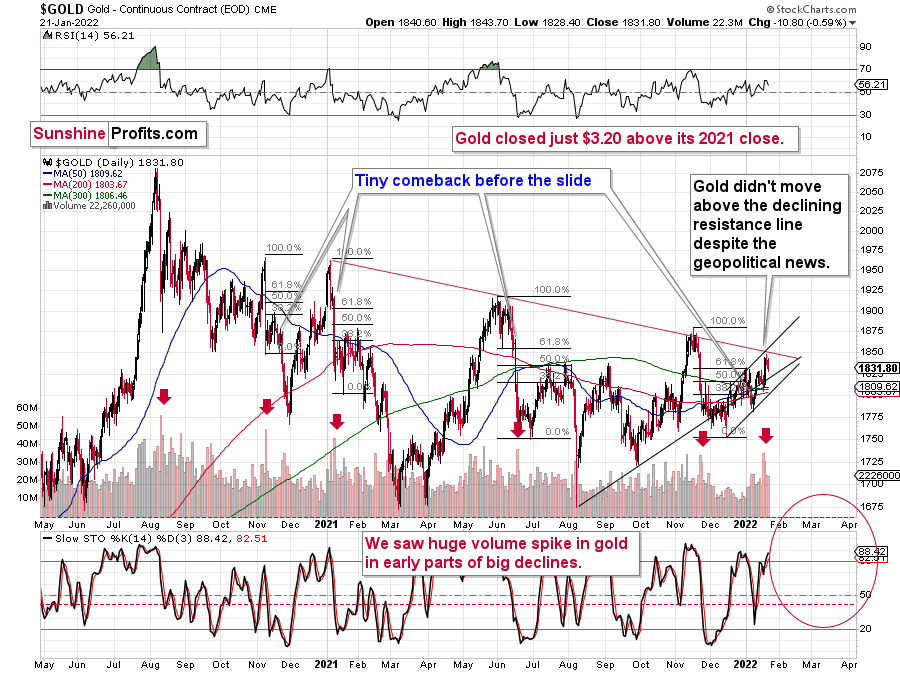 Gold is so far almost unchanged this year, despite the initial decline and the subsequent rally. Overall, gold is up by $3.20 so far in 2022, which is next to nothing.

Gold rallied on a supposedly dangerous situation regarding Ukraine, but it failed to rally above the combination of resistance lines and very little changed technically.

On a side note, I would like to remind you that, based on our own reliable source in Ukraine (one of our team members is located there), the risk of military conflict (in particular, a severe one) is low, and it seems that the market’s reaction was greatly exaggerated.

Anyway, moving back to technicals, let’s keep this $3.20-up-this-year statistic in mind while we take a look at what’s going on in silver and mining stocks. 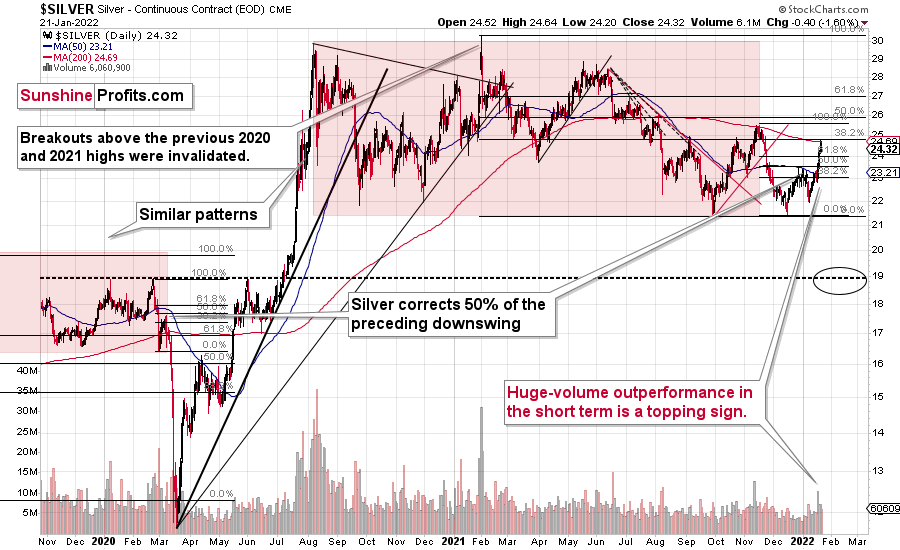 Silver declined on Friday, but it’s still up by $0.97 so far in 2022. This means that on a short-term basis, silver greatly outperformed gold.

What’s up with mining stocks? 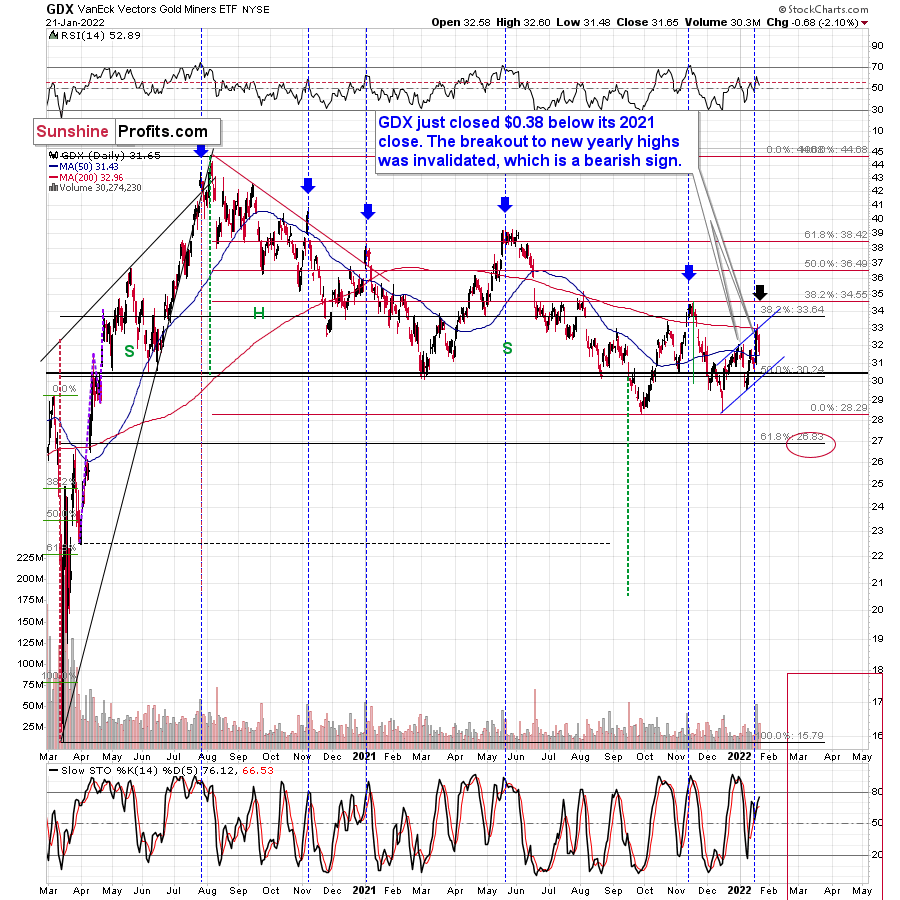 1. While silver is outperforming gold on a short-term basis, gold mining stocks are underperforming it.

2. Junior mining stocks (our short position) are declining more than senior miners, and in fact, they are declining the most out of the entire precious metals sector.

Silver’s outperformance, accompanied by gold miners weakness, is a powerful bearish combination in the case of the entire precious metals sector.

If the general stock market is going to slide, silver and mining stocks (in particular, junior mining stocks) are likely to decline in a rather extreme manner.

We just saw something in the general stock market that we haven’t seen since early 2020 – right before the massive decline that triggered the huge declines in the precious metals sector. 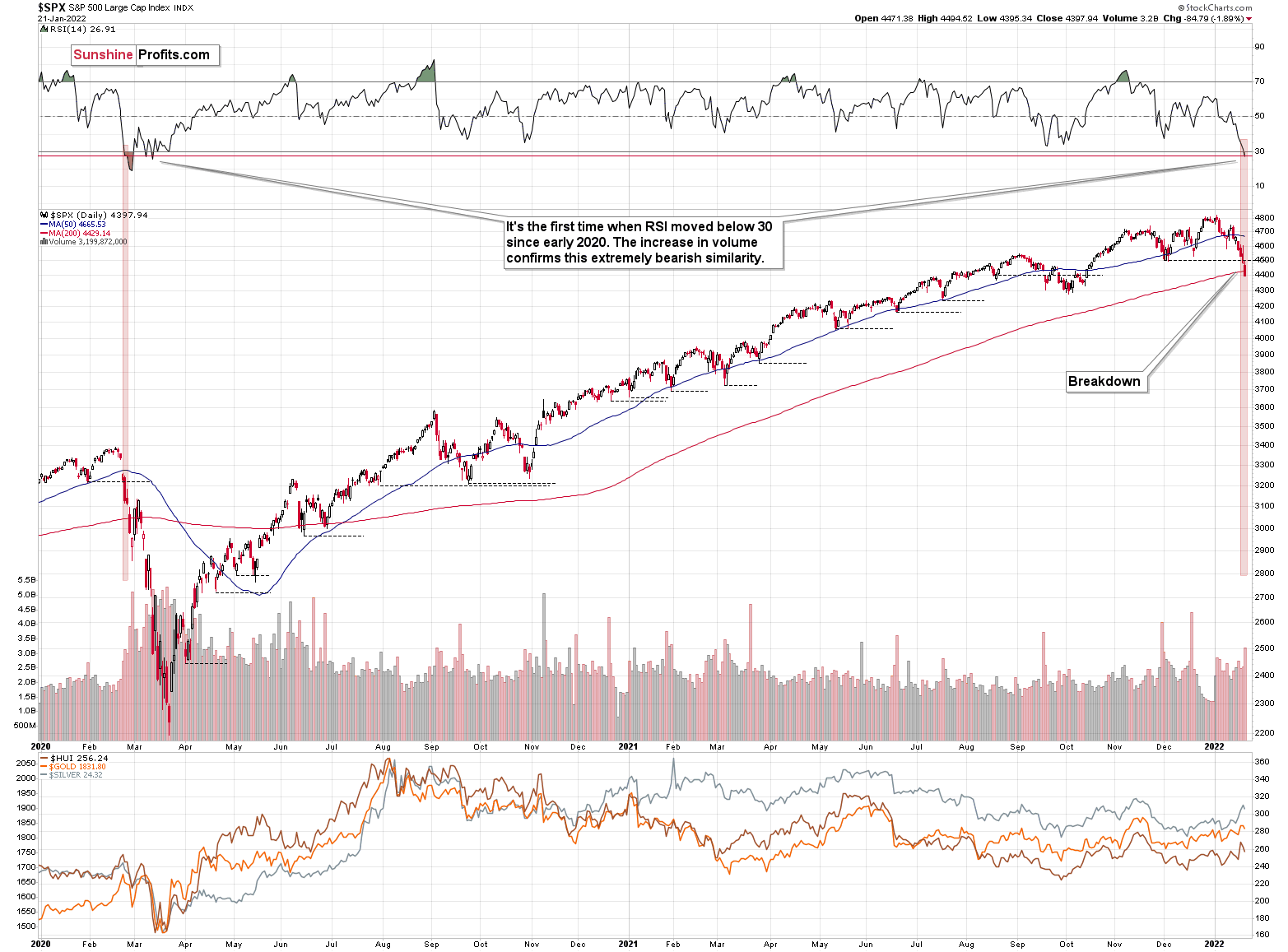 The RSI Index just moved below 30 for the first time since pre-slide moments. Just like what we saw back then, the S&P 500 is now declining on increasing volume.

Yes, RSI below 30 is generally considered oversold territory, but the direct analogies take precedence over the “usual” way in which things work in markets in general. In this case, the situation could get from oversold to extremely oversold. Let’s keep in mind that stocks declined very sharply in 2020.

One could say that times were different, but were they really? The key difference is that the monetary authorities are now already after the bullish money-printing cycle and are handling inflation by aiming to increase interest rates, while they had been preparing to cut them in 2020.

The situation regarding the pandemic is not that different either. Sure, back in 2020, it was all new, we had massive lockdowns and there was great uncertainty regarding… pretty much everything. Now, the situation is not entirely unexpected, but given the explosive nature of new COVID-19 cases (likely due to the Omicron variant), it’s still quite new and uncertain.

The uncertainty is not as great as it was back in 2020, but then again, now we’re facing monetary tightening, not dramatic dovish actions. Thus, I wouldn’t exclude a situation in which we really see a repeat of the early-2020 performance, where the declines are sharp and huge. The technicals in the precious metals market have been pointing to that outcome for months anyway, especially the long-term HUI Index chart that I’ve been discussing previously.