The USD/JPY shed its remaining 2022 gains this week as markets look ahead to the spring’s anticipated economic revival. American inflation, while at a four-decade record in December, was not enough to force Treasury rates higher.

Omicron diagnoses set all-time US and global levels but markets discounted the economic disruption of short-term worker shortages. Infections peaks are expected in the next few weeks to this mild COVID variant, and the growth potential of the global economy sent the dollar backwards in most major pairs on rising risk acceptance.

For the USD/JPY, where the yen often exhibits its own risk-aversion prowess, stalling US Treasury rates undermined the greenback and the loss of 115.00 and then 114.00 support placed the dollar in deeper technical jeopardy. 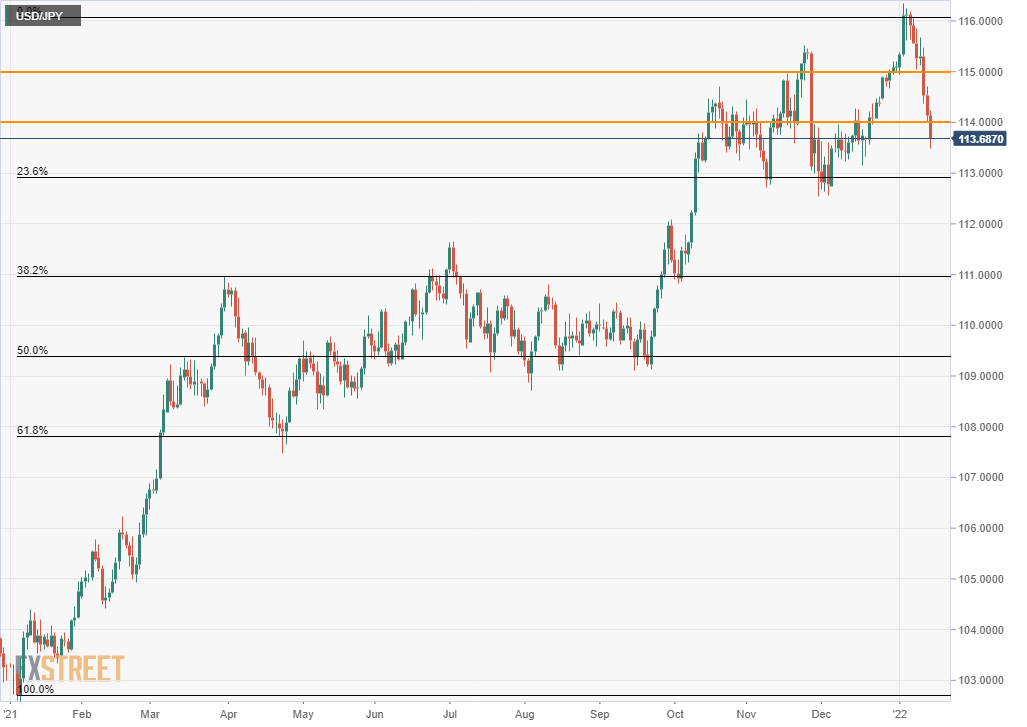 The annual US Consumer Price Index (CPI) rose 7% in December, as forecast, up from 6.8% in November, and a four-decade high. Even though the core rate climbed 5.5%, slightly more than the 5.4% prediction and a large increase from November’s 4.9%, credit markets had largely priced in the results. The yield on the 10-year Treasury dropped 2 basis points on Wednesday  to 1.725% after the release.

Producer prices in the US for December rose 9.7% year-over-year and core prices climbed 8.3%, promising months of higher retail costs as the increases are passed on to consumers.

From the December 31 close at 1.512%, the 10-year yield had added 27 points in the first six sessions of the New Year, finishing at 1.780% on Monday. The return had lost 7 basis points to 1.708% by Thursday’s close but hawkish comments from several Fed officials brought the yield back to 1.747% at the Friday open.

Treasury yields have been responding to higher inflation and changing Fed policy for six weeks.

The sharp rise in the 10-year yield from its open at 1.341% on December 3 to the aforementioned 1.78% on January 7 was paralleled by the Dollar-yen.

From 112.74 on the last day of 2021 trading, the pair reached 116.12 on January 5. The inability of the Treasury yields to continue their advance has removed the main pillar of the USD/JPY leaving it open to a technical descent.

Federal Reserve policy makers are widely expected to initiate a rate cycle at the March 16 meeting. Assuming the Fed meets forecasts with three 0.25% increases by December, the fed funds rate would only be 1% at the end of the year.

For nearly seven years after the financial crisis of 2008-2009, the Fed kept the base rate at 0.25%, as it is now. During that time the 10-year yield varied from 4% to 1.5%, with an average well above 2%. The quantitative easing programs of those years did not target the commercially relevant Treasury yields.

The Fed’s pandemic bond-buying that began in March 2020 was specifically designed to lower those Treasury rates important for the economy. Under that bond program the 10-year yield fell to its all-time low in March 2020.

Now that Fed policy has reversed, the relationship between the fed funds rate and the Treasury market is somewhat uncertain. How much will the 10-year yield rise is the key question for the USD/JPY.

The answer will probably have to wait until the Fed begins its portfolio reduction sometime next year.  The speed of the balance sheet reduction as bonds mature and the mix of terms that roll-off will provide the credit market with notice of the Fed’s wider rate intentions. The USD/JPY is particularly sensitive to rate conditions because the Bank of Japan (BOJ) and Japanese monetary policy is essentially trapped at zero.

Japanese economic data provided no surprises. The Leading Economic and Coincident Indexes for November were better than expected as was the Eco Watchers Survey Current poll for December but not the Outlook version. Japanese producer prices faltered in December which should detract from CPI.

US retail sales for December were far worse than expected, falling in all categories and November’s results were lowered on revision.

If US Treasury rates eschew 2.0% and risk-on market sentiment prospers with its negative implications for the US dollar, the USD/JPY will be hard pressed to recover.

There is substantive technical support down to 113.00 but the area beneath to 112.00 was traversed in just two trading sessions in early October and is quite vulnerable.

In the week ahead, the Bank of Japan meeting on Tuesday will produce no policy changes and if the bank reveals a new economic support package, it will have little market impact. National CPI for December will not alter the BOJ’s view of inflation.

The USD/JPY bias is neutral to lower, balancing strong technical support against rising risk-acceptance and stalled US Treasury rates.

The MACD (Moving Average Convergence Divergence) cross of the signal line on Tuesday was eminently predictive. The USD/JPY finished lower each following session. The increasing divergence and the steeper price line are signals for further USD/JPY losses. The Relative Strength Index (RSI) crossed its mid-point on Wednesday and the sharp five -session decline since leaving overbought status on January 6 tilts toward continuing slippage. Average True Range (ATR) volatility has recovered only modestly since its low on January 3. This has not been a stop-loss driven decline.

The 21-day moving average (MA) and the 50-day MA were crossed in succession on Wednesday and Thursday. Neither offered appreciable support.

The FXStreet Forecast Poll expects the extensive support from 113.40 to 112.70 to provide a base for recovery.