This was the week: Turkey, Trade, BOJ speculation, and more

Turkish crisis: Emerging markets and especially Turkey came to the forefront. The country that lies between Europea and Asia has long suffered high inflation and a defiant President that prefers low interest rates. Things became more complicated when the US imposed sanctions on two Turkish ministers due to the detention of a US Pastor.

The plunge of the Turkish Lira was at first a local issue. However, when the European Central Bank became worried about European banks exposed to Turkey, it became a global one. The market mood worsened, and the Japanese yen saw safe-haven flows.

Trade concerns have been in the headlines once again. While there were no extreme adverse developments, we did learn that the US will impose tariffs on $16 billion worth of Chinese products on August 23rd and China said it would retaliate in kind. The US began with duties on $34 billion of goods earlier in the summer and with this move the total new tariffs reach $50 billion. The decision did not come as a surprise and markets have another trade date in mind.

On September 6th, the US plans to slap no tariffs on no less than $200 of Chinese products, a step that would serve as a significant escalation. There is still time for negotiations.

US data: In the US, the Producer Price Index (PPI) data came out slightly below expectations, but this seems like a one-off. JOLTs Job Openings beat expectations with 6.662 million annualized while Consumer Credit grew by a disappointing $10.21 billion.

BOJ impact: The Japanese Yen continues moving to the beat of the Bank of Japan in the week following the rate decision. Markets tested the BOJ's commitment to keeping 10-year yields close to 0%. The BOJ is somewhat more relaxed, as it wants to give banks some space to make a profit. Higher yields push the yen higher. Each time the BOJ intervened to keep yields low, the currency dropped.

Japanese GDP: Another positive development for the Japanese yen came from its quarterly GDP report which came out 0.5% QoQ, above expectations. The BOJ is unlikely to budge on these data and instead wait for inflation.

US events: Consumer in focus

The US economy is centered around consumption and this week we will get a fresh update on consumption for July, the first month of the third quarter. The figures feed into GDP expectations and may also indicate the impact of tariffs on consumption.

Headline Retail Sales rose by a robust 0.5% in June and are now projected to increase at a slower pace. Excluding autos, sales advanced by 0.4%. The most important gauge is the Retail Sales Control Group which remained flat in June and is now expected to pick up.

Unit Labor Costs and Industrial Production, also released on Wednesday, may have an impact if Retail Sales provide no surprises.

Thursday sees a mix of housing figures, weekly Initial Jobless Claims, and the Philly Fed Manufacturing Index. None of these measures stand out, but if they all go in the same direction, it could have a material impact on the US Dollar.

The last word of the week belongs to the US consumer again. The University of Michigan's preliminary Consumer Sentiment Index is set to remain steady at familiar levels just below 100.

Japanese industrial output, trade balance, and investment figures are notable, and they will feed into the future movements of the currency. Japan is expected to report another trade surplus with increases in both imports and exports. The impact of trade wars on Japan has been minimal.

However, the more significant mover of the Yen is the 10-year Japanese bond-yield. Any movement to the upside by yields is likely to be accompanied by an upward move for the Yen. Extended bond-buying by the Bank of Japan will weigh on the currency.

Also, the Yen seems to have returned to its safe-haven role. An escalation in the rhetoric between the US and China on tariffs can push the Japanese currency higher while calmer talk can trigger some selling. North Korea has been quiet for a while, but one always needs to keep an open eye to any development there.

The pair is trading below a downtrend resistance line that accompanies it since late August. More importantly, the USD/JPY is slipping below the 50-day Simple Moving Average, and Momentum turned negative. The Relative Strength Index (RSI) is balanced, thus not pointing to oversold nor overbought conditions.

All in all, the bears are gaining some ground, but there is no decisive trend just yet. 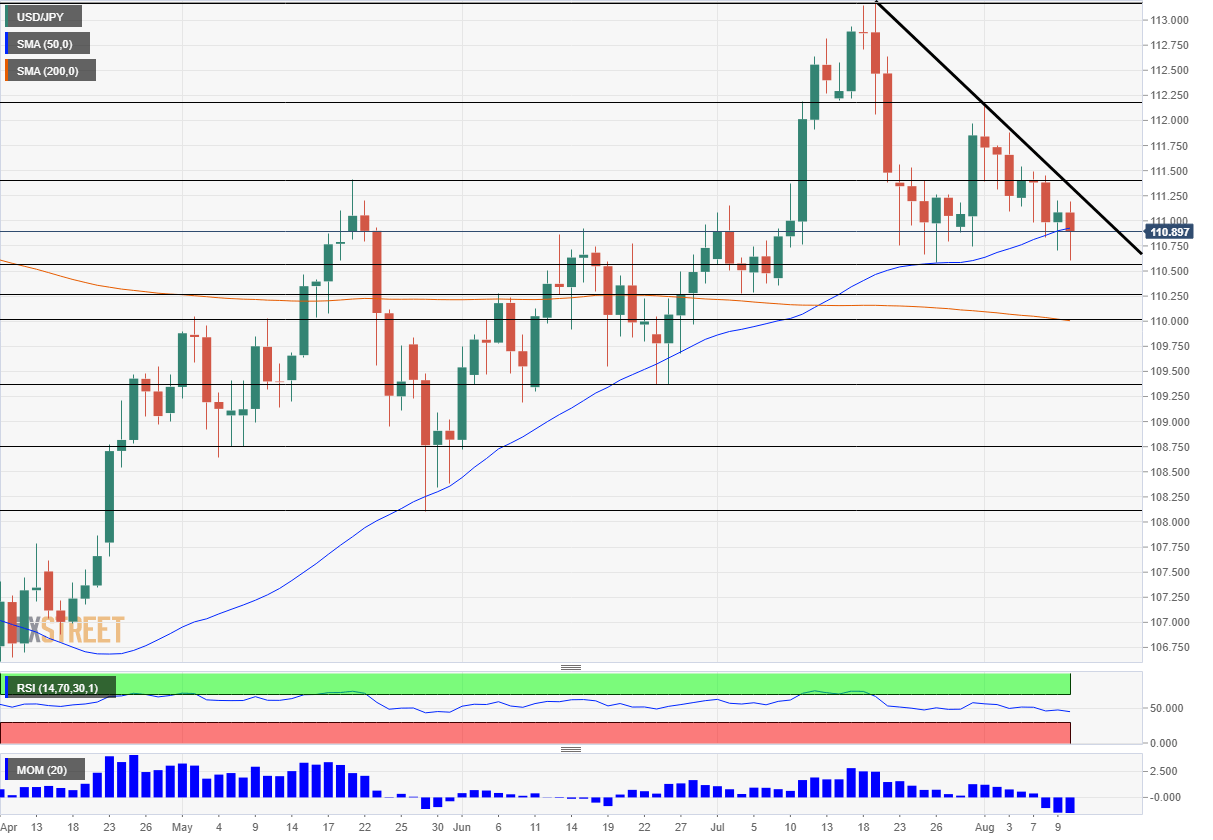 The Yen has firmly reasserted itself as the ultimate safe haven currency and it is here to stay. Concerns about trade and the impact of the Fed's tightening on the global economy will likely continue pushing money in Japan. There is more room for falls in the USD/JPY even if US data shines.

The FXStreet forex poll of experts shows a bearish tendency in the short run but a bullish one later one. The average has only changed for the short term.