The collapse of the Turkish Lira and ECB's concerns about local banks' exposure to it overshadowed everything else. The EUR/US pair plunged to 1.1431 early Friday, its lowest since July 2017, as multiple factors conspired to boost the greenback. The EUR/USD pair was barely holding above the 1.1500 figure late Thursday, as thin market conditions, amid a scarce calendar, exacerbated demand for the greenback after Fed's Evans, and usual dove, said that one or two more rate hikes this year seem "reasonable." He added that the economy is "extremely strong" and therefore he is more confident inflation will stay around the desired 2.0%.

Risk aversion also had its saying, as the trade war between China and the US escalated. On Tuesday, the US announced it will impose a 25% tariff on another $16B worth of Chinese goods,  focused on industrial goods. That adds to the current tariffs on $34B of Chinese imports that went into effect July 6, bringing the total worth of Chinese goods subject to tariffs to $50B.

Beijing didn't wait long to retaliate, announcing a 25% tariff on $16B worth of US good, to come into effect by the end of August, on a list that includes energy products and vehicles, and said that, if necessary, the country is ready to retaliate with tariffs on about $60 billion worth of US goods, with rates between 5% a 25%, according to the Ministry of Commerce.

Back to Turkey, the Lira is down roughly 15% just this Friday, having lost almost 40% since the year started. President Erdogan describes himself as an "enemy of interest rates," keeping the country's rates at record lows to boost growth but risking overheating the economy. Tensions with the US over the detention of a US evangelical pastor on terrorism charges triggered Washington anger, which responded with sanctions to the country, deteriorating further confidence in the country. The up roaring lira is a major concern for the ECB, on fears that Turkish citizens might not be prepared to support the depreciation of the lira and will start defaulting on foreign-currency loans.

Data from the Bank for International Settlements (BIS) showed that Spanish banks are due $83.3 billion by Turkish borrowers, French lenders are owed $38.4 billion, and banks in Italy are owed $17 billion, the FT reported. Trump re-doubled the bet and fueled risk aversion, by tweeting "I have just authorized a doubling of Tariffs on Steel and Aluminum with respect to Turkey as their currency, the Turkish Lira, slides rapidly downward against our very strong Dollar! Aluminum will now be 20% and Steel 50%. Our relations with Turkey are not good at this time!"

In the meantime, US July inflation released this Friday was up 0.2%MoM as expected, while the YoY figure surged by 2.9%, matching the previous month reading but below the expected 3.0%. The core yearly figure was up 2.4%, beating expectations of 2.3%.

Next week, the macroeconomic calendar will be plenty of relevant releases, although seems likely that sentiment will keep on leading the way. Among the most relevant releases are German inflation and preliminary Q2 GDP and the EU preliminary Q2 GDP that will be out next Tuesday, while the US will release Retail Sales and employment figures on Wednesday. Finally, July EU inflation will be out on Friday.

The EUR/USD pair extended its decline down to 1.1414, its lowest in over a year, settling not far above the level. The current 1.1440 region has been a major resistance, as between 2015 and 2017, the pair was unable to break above it but temporarily.

Weekly basis, the negative trend has gained momentum, as the pair is poised to finish the week below the 100 SMA for the first time since May 2017. In the same chart, the 20 SMA maintains a strong downward slope above the current level, while the RSI accelerated south around 32. The 200 SMA is the next barrier for bears at 1.1360.

In the daily chart, the price is developing far below bearish moving averages, with the closest being the 20 SMA, at around 1.1630 now. Technical indicators in this last chart head sharply lower, now nearing oversold territory, and reflecting the strength of sellers. 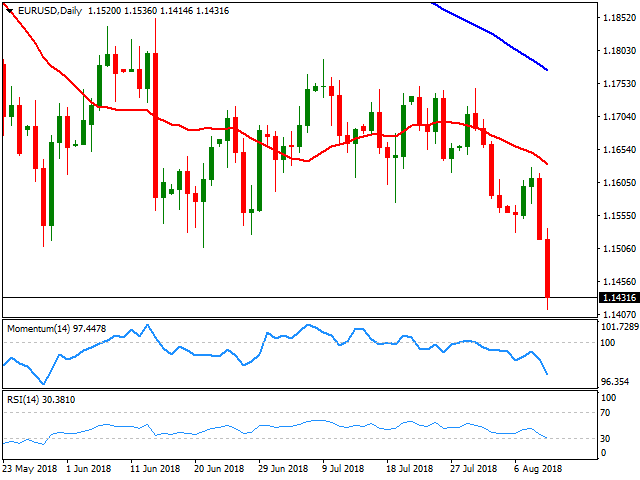 The FXStreet Forecast Poll this week suggests that dollar momentum amid risk aversion will prevail next week, while afterward, the currency is losing some ground. Still, the longer-term advances expected look as mere corrections, as the average targets are not far from current levels. In the case of the EUR/USD pair, bears are averaging 1.1443 for the upcoming week, while bulls take the lead on the monthly perspective, accounting up to 67% from 43%, although with lower highs expected, downgrading the average target from 1.1593 to 1.1524. In the 3-month perspective, the number of those considering a possible recovery increased from 28% to 46%, although the average target has also been downgraded. The FXStreet Overview chart, however, paints a bearish picture, with the three moving averages gaining strong downward strength. For the upcoming week, 1.1300 is at risk of being challenged according to the chart.