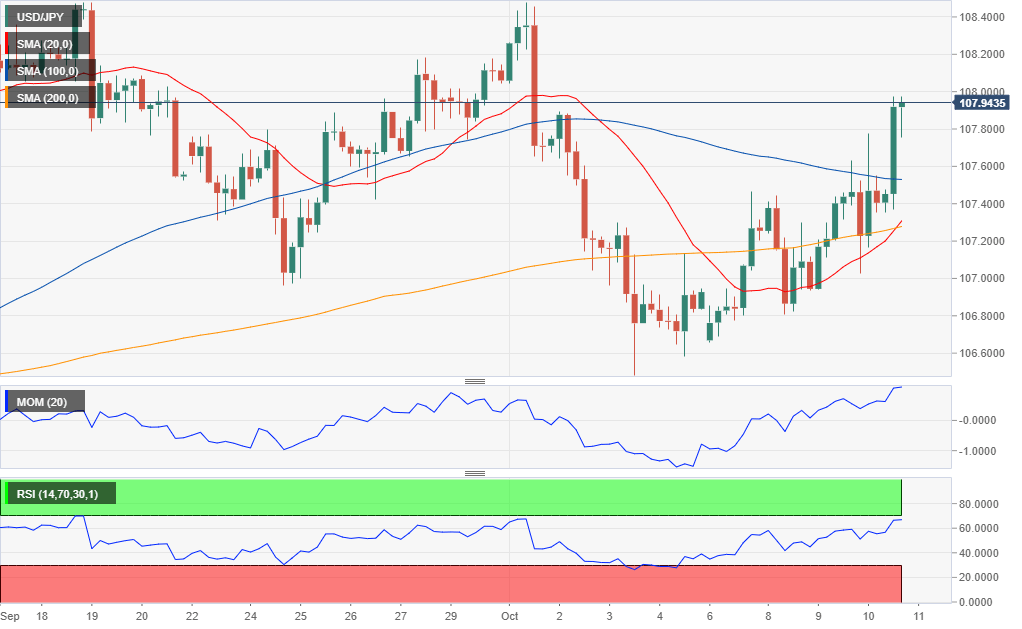 The USD/JPY pair benefited from the better market mood, reaching a daily high of 107.96. Safe-haven assets edged lower, with  US Treasury yields jumping also to weekly highs. The yield on the benchmark 10-year Treasury note hit 1.67% after bottoming at 1.55% on news US President Trump will meet Chinese Vice Premier Liu this Friday in another attempt to reach a trade deal. Meanwhile, worldwide equities settled in positive ground, with Wall Street advancing for a second consecutive day.

As for macroeconomic data,  Japan released at the beginning of the day the September Producer Price Index, which came in at 0.0% MoM, slightly better than the -0.1% expected, and resulted at -1.1% when compared to September 2018, beating the -1.2% expected.  The Japanese macroeconomic calendar will be quite light this Friday, as the country will only release September Money Supply.

The USD/JPY pair is trading just shy of the 108.00 figure, retaining its positive short-term stance according to intraday technical readings. In the 4 hours chart, the pair has stabilized above all of its moving averages, the first time in over a week. Technical indicators, meanwhile, hold near overbought reading and at intraday highs, having lost just part of their bullish momentum. The pair has been rejected twice from the 108.46 price zone during September, with a steeper recovery expected if the level breaks above it.