The dollar had its worst month of the year in October, selling off by close to 2%. It is tempting to call this the top, but even if it is, the case for a higher EUR/USD is not particularly strong right now.

A combination of a better trade environment and softer US activity data saw the dollar sell off 2% in October. Activity currencies performed well, while a little more clarity on Brexit saw GBP lead European currencies higher across the board.

Once again the dollar moved in tandem with the US 2-10 year Treasury curve, which has proved a good barometer of secular stagnation fears this year. The third Fed cut and the détente on trade saw the curve steepen on optimism and activity currencies recover on the view that parking money in USD deposits was not the only game in town.

For the dollar to fall a lot further, however, would seem to require a big extension in some of these themes, such as:

We tend to think the former is more likely than the latter (where European and Chinese activity still looks subdued), but our rates team are not big fans of the US 2-10 year yield curve steepening beyond this year’s range high of 30bp just yet. As such, we think it a little premature to be calling the dollar a lot lower – especially against the low-yielding EUR and JPY. 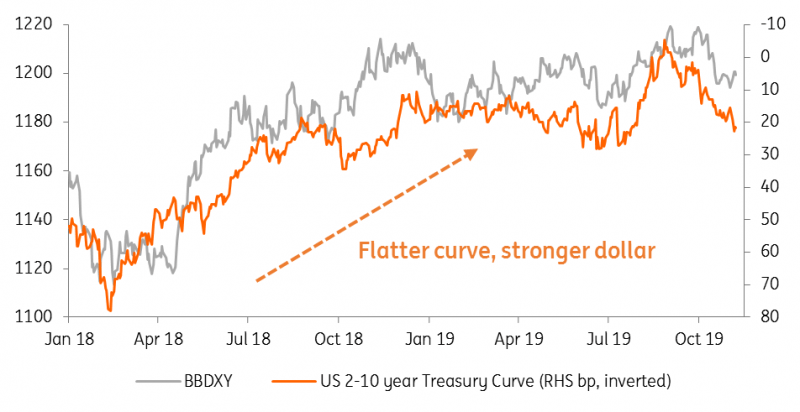 The drivers of the EUR are changing

Given the eurozone’s exposure to the global trade cycle, the euro has typically been seen as a pro-cyclical currency. Here, trade and the manufacturing sectors are seen as inextricably linked, based on the weight of intermediate goods in trade volumes.  And for much of the last two decades, EUR/USD has had a positive correlation with world equity indices. ‘Risk on, dollar off’ has been a familiar refrain.

However, over the last several months, the positive correlation between EUR/USD and world equities has broken down. In fact, the 90-day correlation in changes between the two is now firmly negative. This relationship may have been distorted by the gyrations in GBP, but the move to a negative correlation is one which certainly bears watching. It warns that even if we do receive further positive developments on US-China trade - and equities rally - EUR/USD may not be a big beneficiary. This may be because the EUR is transitioning into a funding currency.

The EUR as a funding currency

It is early days, but the EUR seems to be adopting the characteristics of a funding currency. We first highlighted this in our article ‘EUR: Misleading indicators, portfolio flows and hot money’, particularly with developments in the FX options market.

The BIS has recently released another set of data which tends to support this view. Here the locational set of banking statistics provide insights into cross-border borrowing by currency. The BIS provides an FX-adjusted set of quarterly figures, which we produce below.

Despite secular stagnation fears, total cross border borrowing on a year-on-year basis is actually rising at the fastest rate since the global financial crisis. And leading the charge is cross-border borrowing in the EUR. Over the last twelve months, participating banks report that their cross border lending in EUR has risen by near US$900bn, while USD lending has risen by around US$550bn.

It would seem that the EUR is becoming the preferred borrowing currency of choice, enjoying  good liquidity, low volatility and most importantly, little risk of interest rates rising anytime soon. We’ve seen these trends emerge and weigh on the likes of the JPY and the CHF over the last two decades and see early signs of the EUR of crossing the floor to join these funding currency peers.

This would suggest that even if the risk environment does improve a lot, EUR/USD would lag. That's why we see EUR/USD continuing to trade near the 1.10 area over the next several months and only see limited upside – perhaps to the 1.15 area towards the end of 2020. 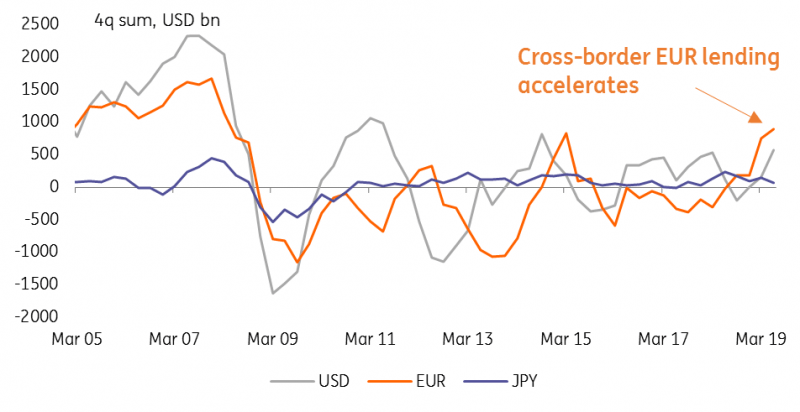 GBP and the election

Elsewhere we expect GBP to consolidate ahead of the December 12th election – this because positioning is better balanced now and the volatility and quality of opinion polls will prevent large new positions being set. That probably means a 1.25-1.30 range for Cable and an 0.85-0.88 range for EUR/GBP.  We’ll publish post-election GBP scenarios in a separate article.

Read the original analysis: USD: is this the top?

USD/JPY extends losses below 107.50 amid risk-off, eyes on Trump's response

USD/JPY loses further ground below 107.50, as the yen remains well bid amid US-China tensions and upbeat Japanese data dump. The Asian stocks and S&P 500 futures flash red. Focus shifts to the US data and President Trump's response to the Hong Kong issue.

AUD/USD: Choppy within range below 0.6650 amid US-China risks

AUD/USD remains depressed around 0.6640 so far this Friday. Risk-tone remains heavy as global equities are weighed down by escalating US-China tensions over the Hong Kong security issue, with all eyes now on Trump's presser.

Gold, a traditional safe-haven asset, is drawing bids as the US stock futures are signaling risk aversion. China imposed the controversial national security bill on Hong Kong on Thursday. Markets fear the US would retaliate with sanctions on China.