We get two central bank meetings this week, the Reserve Bank of Australia (tomorrow) and the Bank of England (Thursday), with no change expected at either meeting but now that the Bank of Canada has said it’s going to cut back, two banks–Bank of American and NatWest-- expect something similar from the BoE.

We get plenty of US data this week, including the ISM report today and its excellent “prices paid” indicator, but as usual the market-mover is payrolls on Friday. March delivered an unexpected 916,000 and forecasters expect April to be even better, 991,000 (FT). We are not even going to mention the unemployment rate because it’s so inaccurate and misleading–6% in March? Gimme a break. Even U6 is 10.7% in March when a realistic number would be at least 5 points higher.

To retain some perspective: personal income rose a stupendous 21.1% in March (after a drop by 7% in Feb), the most on record, mostly due to the third round of direct government payments to consumers. Personal consumption spending rose 4.2% (after a 1% drop in Feb), showing a lot was saved, invested or used to pay down debt. On the side, core PCE rose 1.8%, still below the Fed’s 2%. The consensus has it that inflation will rise over the summer and into the fall but taper off as demand gets caught up, and not get out of hand. A big minority disagree and think inflation will get out of hand.

Despite the assertion that the world’s big economies will have fully recovered to pre-pandemic levels by year-end, the US had GDP growth of 1.6% q/q and the eurozone contracted by 0.6% q/q at the same time, something the FT labelled a “double-dip recession.” This is probably premature and Q2 could be a blockbuster, if markets start acting on expectations instead of rearview mirror data. Still, the eurozone failed to get a base effect. Meanwhile, the UK and Japan have positive growth rates in Q4 and are expected to get the same for Q1 when reported, with an added boost from the base effect.

We see two factors at work here: faster growth is supposed to lead to higher inflation and a more hawkish central bank, lifting yields and the yield curve and favoring the currency. When US growth, however, is excellent and the Fed insists on staying as dovish as before, that is a risk and the risk-off crowd buys dollars or pares shorts. In other words, in the absence of authentic risk, invent some.

In the end, so such doubt sends traders to other currency pairs, including weirdos like AUD/CAD (where the BoC said let’s taper and the RBA may be on the brink of the same message). That’s Rocky’s Rule 5–when in doubt, go to the non-dollar crosses. We find the most interesting doubts in the GBP, more vs. the euro than the dollar. If the BoE announces it’s thinking about tapering or actually tapers on Thursday, watch the euro take a bath. One forecast has it sliding from 0.87 now to 0.82.

The dollar rally on Friday was peculiar and without obvious incentives, but big enough to be meaningful. False breakout, normal pullback/correction, or what? Watch to see if we get a Tuesday pullback on the pullback.

Inflation Watch: The WSJ has a front-page story on pending inflation. “Consumers are splurging on cars and furniture–and facing extended waits for delivery. Restaurants and gyms are reopening–and struggling to find workers. Factories and home builders are trying to ramp up–but are short on semiconductors or raw materials. Federal Reserve officials and most economists largely play down supply and cost problems as transitory, saying they aren’t widespread enough to threaten corporate profits or the broader U.S. economy for long, especially amid strong sales.

But problems are acute for some individual businesses and even entire industries. Executives from gadget giant Apple to mattress seller Tempur Sealy International said last week that supply-chain issues could curb their growth in the short term. Others have responded by raising prices on everything from diapers to air conditioners.”

Supply chain disruption seen in congestion at the Los Angeles/Long Beach ports is still acute, if fractionally less than before–16 ships waiting from 18 last week but the waiting time to unload at 10-13 days. Last week one of the biggest container shippers halted bookings from Latin America, including Mexico (Bloomberg).

A reader sent us the best one yet–lumber. “The surge in lumber prices has added $35,872 to the price of an average new single-family home and $12,966 to the market value of an average new multifamily home,” according to the National Association of Home Builders. It’s front page news at the WSJ today, with the subhead “The frenzied climb in lumber prices is generating superlative profits for sawmill owners.” As noted everywhere, commodity prices are soaring–copper, iron, steel, aluminum, corn and wheat, etc. The CRB index is up 19.07% from the start of the year. 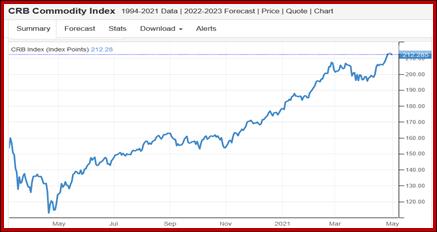 Then there is the housing shortage vs. new demand. Redfin reported median home price in April rose 20% y/y to $347,500 and a house stays on the list for an average of only 20 days. The Case Shiller versions has Feb home prices up 12% y/y, the fastest rate since 1996. Talk of a bubble is silly and not applicable to housing as long as new building lags, population grows, and bank lending standards are watched like a hawk. The burst bubble last time had nothing to do with supply and demand and everything to do with securitization of unqualified mortgages to unqualified buyers. In any case, home prices are not included in CPI or PCE.

All the same, El-Erian writes (again) that the Fed is mired in old thinking and it risks financial market instability. “For quite a while now, the Fed has worried about a balance of risk tilted towards deflation. That balance of risk has flipped. It’s not just time for the Fed to start thinking about less monetary stimulus. It’s time for it to taper its markets interventions for the longer-term wellbeing of the economy and the structural health of financial markets.”

TreasSec Yellen was less than helpful by saying on weekend TV that Big Spending will not create inflation because it will be spread out over 8-10 years. Balderdash. It’s coming now.

Tidbit: “The inflation objective of the FOMC is set in terms of the rate of change of the price index for total personal consumption expenditures (PCE). However, total PCE price inflation is highly volatile, even on a year-to-year basis. Consequently, economists and policymakers have suggested alternative procedures for reweighting the index's components so as to reduce the variance of the measured inflation, to better distinguish transitory from persistent movements, and, ultimately to better anticipate future developments in inflation. The literature has used the generic term "core" inflation to refer to these alternative measures.”

“Core” is mostly determined by exclusion of some prices or by excluding some portion of extreme prices. “The goal of this note is to provide an assessment of two of the most commonly used indicators of core inflation: the PCE price index excluding food and energy (an exclusion index), and the Dallas Fed trimmed mean PCE price index (a central-tendency statistical measure).”

To jump to the conclusion: “Our results do not identify one measure as clearly preferable to the other. The rate of change in PCE prices excluding food and energy price offers the advantage of having the same mean as total PCE price inflation over sufficiently long samples, but is more affected by data revisions than the trimmed mean. In contrast, the trimmed-mean is less subject to subsequent revision, but the index has tended to rise faster than the total PCE price index over the past 20 years or so. Finally, from a forecasting perspective, the two core measures anticipate future movement of total inflation better than total inflation itself; however, neither clearly outperforms the other.”

The chart is 20 years old now but never mind. It’s useful to illustrate divergences. The blue line is PCE and the red one is core PCE. The green is the Dallas Fed trimmed mean. So, for the last time–the Fed does not look at core PCE. It looks at several versions but the top one is plain old PCE. 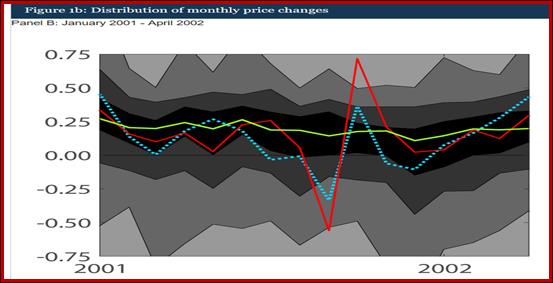 Tidbit: The US is not alone. Germany has conspiracy theory addled groups, too. Last week the NYT reported the German state has started to keep track of Covid deniers. Over the past year, demonstrators have attacked police officers, defied civil authorities and in one widely publicized episode scaled the steps of Parliament…. In announcing the decision to keep tabs on conspiracy theorists, intelligence officials noted the movement’s close ties to extremists like the Reichsbürger, a network of groups that refuse to accept the legitimacy of the modern German state. Many coronavirus deniers say they also believe in QAnon conspiracy theories, and protesters are frequently seen holding signs with anti-Semitic tropes. “The movement, called Querdenken, German for lateral thinking, communicates and recruits over social media and has a large presence on the encrypted chat service Telegram, where its main channel has 65,000 subscribers. Parts of AfD, a German right-wing populist party that is also under surveillance, have allied themselves with protesters.”

Remember that two weeks ago, the Parliament took lockdown control the Laender and gave it to the federal government. At the time, “about 8,000 of the movement’s activists took to the streets in Berlin before being dispersed by the police for ignoring mask and distancing rules. Germany has seen a persistently high number of new daily cases recently, averaging about 19,000, up from about 8,000 two months ago.”

Another Tidbit: The Economist is the only press outlet to note that today is the 100th anniversary of the invention of Northern Ireland. “The country was brought into existence by the Government of Ireland Act, passed by Westminster in 1920. That partitioned the island of Ireland, against the background of a war of independence waged by Irish nationalists. The centenary will be a low-key affair: events include tree-plantings, a church service and a business-investment conference. Sinn Fein, the largest nationalist party, which seeks to reunify Ireland, sees little to celebrate.

“Nor do many Unionists, who are reeling from Brexit. Under the terms of Britain’s exit treaty from the European Union, a trade border has in effect been erected through the Irish Sea, economically separating Northern Ireland from the rest of the United Kingdom. Northern Irish Unionists see it as a calamity for British unity, and fear political separation will eventually follow.”