Business shutdowns and personal restrictions are expected to slow the US recovery as viral counts in many parts of the country force governments to roll-back previously opened sectors.

The Manufacturing Purchasing Managers' Index from the Institute for Supply Management (ISM) is forecast to slip to 57.9 in November from its 25-month high of 59.3 in October. The Employment Index is predicted to drop to 51.4 from 53.2 its best level since June 2019. The New Orders Index is projected to plunge from its all-time high of 67.9 in October to 53.4 in November.

Analysts have consistently underestimated the resilience and optimism of the American business sector since the beginning of the pandemic.

From March through October, the actual ISM figures for overall PMI have been better than their forecasts in six of eight months.

For the forward looking New Orders Index the ratio is five to three. That record includes a miss on every forecast since May by an unheard of average of 15.4 points per month. In October the consensus estimate was for the index to fall 14.3 points from 60.2 to 45.9. Instead it rose to 67.9 the highest level in more than 17 years.

Only in employment has the pessimism been somewhat warranted. The over-under is equally split, but in October the index was expected to drop to 40.9 from 49.6, it rose to 53.2, its best score in 16 months.

The point here is not to pick on analysts for being members of the dismal science. It has been extraordinarily hard to predict anything since the response to the pandemic scrambled every economic variable. The size and immediacy of the labor market and consumer collapse was missed, as was the recovery of both in in May and June.

No one expected an economy with an average unemployment of 9.6% (March to October) to also have one of the strongest Retail Sales figures in decades.

The primary source of economic concern has been the 9.4% rise of unemployment claims in the last two weeks. 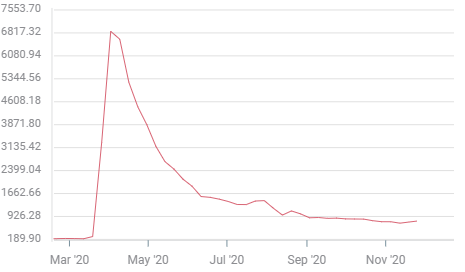 This is not the only or the largest jump in the eight months of the pandemic, but it is the only one coordinated with a potential cause. Claims jumped 127,000 in two weeks from July 10 to July 24 and again in August filings rose 133,000 in one week to August 14. The difference is that in summer the pandemic was quiescent, there were no new closures and while markets were nervous there was no obvious cause for the rise in claims.

The situation is quite different now.

The surprisingly positive November results for Manufacturing and Service PMI from IHS Markit of London are another reason for some skepticism on the ISM forecasts. 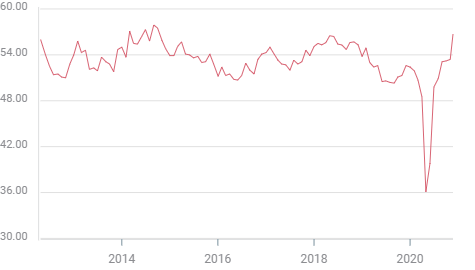 The Markit and ISM Surveys are well correlated. It is rare for them to move in different direction in a month.

The Markit PMI surprise on Monday November 23 prompted a modest rally in the US dollar which commenced with the 9:45 am release in New York. On the day the greenback rose in five of seven major pairs and in the Dollar Index.

Recent weakness in the USD has been based on the notion that the pandemic will slow or reverse the recovery of the US economy. It will start, as in March with the labor market.

Any sign that is not the case, and the dollar has room to improve.