The governors did not want their pandemic rate accommodation pressured by the traditional credit market approach to inflation which often anticipates the Fed’s own policy adjustment by many months.

The Fed’s defensive preparation was warranted.

This year annual inflation has tripled in four months, from 1.4% in January to 4.2% in April.

Consumer prices collapsed last spring. Americans stopped buying except for food and essentials and retreated into their homes. The economic recovery and accompanying demand surge this year has produced the predictable inflation spike that the Fed anticipated.

Annual CPI has increased sharply since the beginning of the year. From January to February it rose 0.3%, from February to March 0.9% and from March to April 1.6%.

If the May forecast of 4.7% is correct, the base effect has begun to subside. The increase of 0.5% from April to May will be less than a third of the gain one month earlier.

The Fed’s calculation that once the distortion of the lockdown price plunge had passed inflation would resume a normal, and much shallower, upward curve is probably correct. The question for the rest of the year is how much has the underlying inflation rate changed?

The economic forces that have been gathering this past year will keep inflation above last year’s average. How much above is the known unknown.

Inflation will not return to its pre-pandemic range because the US and global economies are far from normal.

Labor markets remain strained in the US. A record 9.3 million jobs were untaken in April in the Job Openings and Turnover Survey (JOLTS), an increase of almost one million from March.

With hiring dismal in April and anemic in May considering the number of positions open, employers are offering wages increases and signing bonuses. The cause of worker reluctance is probably the extended federal unemployment benefits. If so then the extra compensation may fade as the program ends in September.

The long term effect of higher wages is unknown but wages are particularly sticky. It is difficult for one firm to lower compensation in a tight labor market when other companies continue to pay at higher rates. There is a good chance that the higher pay scales are permanent.

Commodities are another ingredient in price movement. The Bloomberg Commodity Index (BCOM) is up 23.9% since the close on December 28 last year. It is 57.3% higher than the pandemic bottom on April 24, 2020.

Oil is not just the industrialized world's premier commodity with participation in almost every facet of modern production. Oil prices transfer directly and immediately to the consumer. The nationwide average for a gallon of regular gasoline was $2.94 on June 6,  36.1%  higher than its price on December 28 last year. 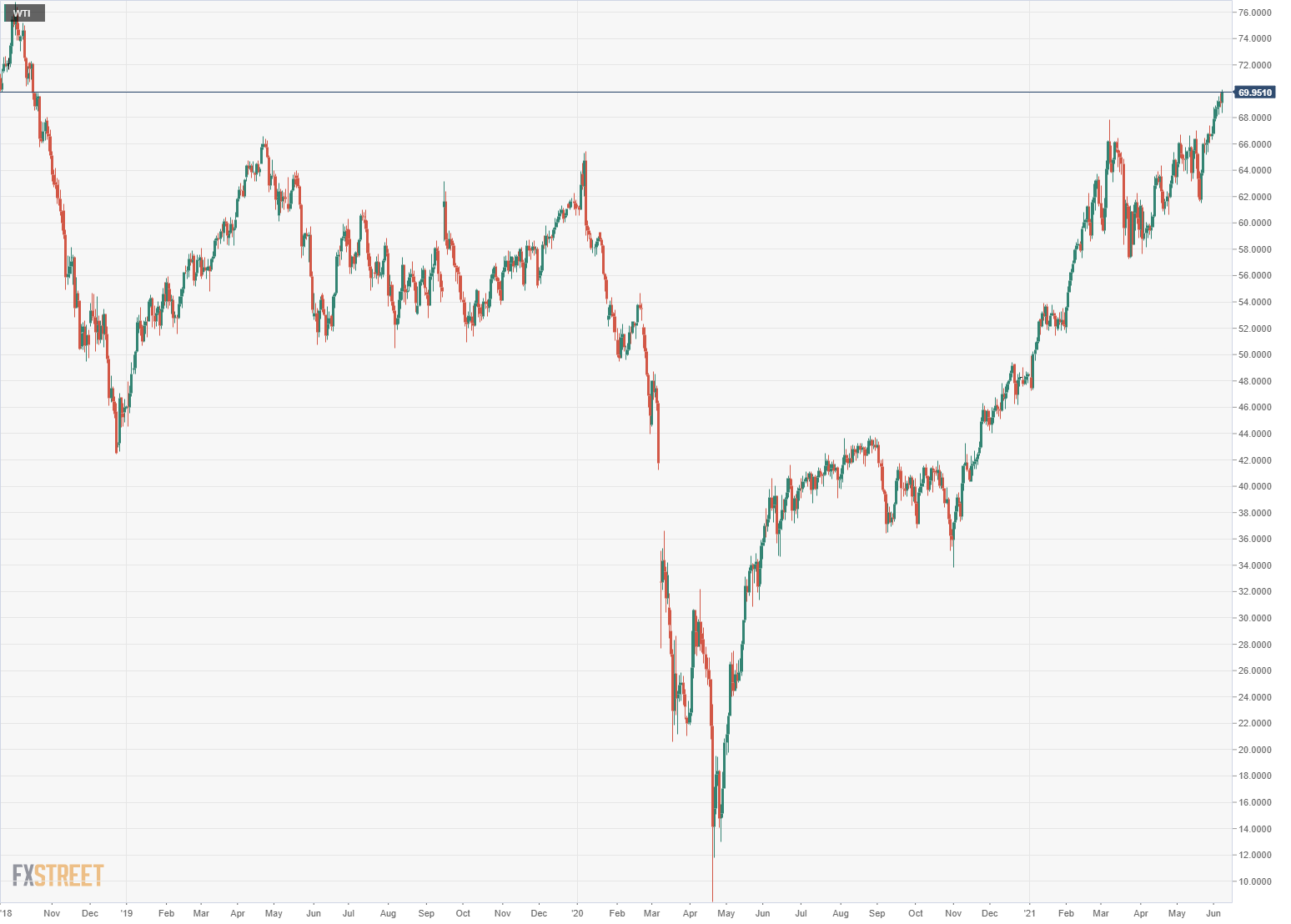 Finally, production delays and component and raw material shortages, primarily computer chips, have curtailed manufacturing for many and varied consumer products. Prices have consequently gone up for a wide array of consumer and food items.

For the past 25 or 30 years globalization and the worldwide supply chain have kept a lid on consumer prices..

These lockdown-induced shortages and disruptions have affected factories around the world. There are no cheaper goods to sell, in some cases there are no goods at all. Pricing power has returned to many manufacturers and retailers.

The labor and product shortages will eventually ease but not before many months of further increases. Commodity prices depend on demand and that looks to be strong through the end of the year.

While the upward pressure on these categories may diminish, their input into the cost of goods and services should ensure the highest inflation rate in a decade and it should remain so into next year.

The Federal Reserve has tied its monetary policy to a complete labor market recovery.

Payrolls in April and May, barely half of expectations, have damped what had appeared to be a rush back to full employment.

The Biden administration has complicated the picture by extending unemployment insurance through September. This seems to be retarding hiring, or perhaps it is more accurate to say, to be dissuading some workers from looking for a job.

Treasury rates rose sharply in the first quarter as markets speculated that the US economy would accelerate. In all aspects except the labor market that has been true.

Growth has exploded from 6.4% annualized in the first quarter to an estimated 9.4% from the Atlanta Fed in the second. Purchasing Managers’ Indexes for services and manufacturing are, except for employment, uniformly strong. Managers note the difficulty of finding and employing workers rather than not having jobs to offer.

The fast healing US economy has prompted the Fed to begin the preparation for a reduction and conclusion to its bond purchase program. The $120 billion a month of Treasuries and mortgage assets bought by the Fed each month has kept the short end of the yield curve pinned near historical lows.

Minutes from the April meeting mentioned that some of the members thought the time  for discussing the bond program might be approaching. A number of other Fed and government officials, including Treasury Secretary Janet Yellen, have voiced similar opinions.

The April and May payrolls have temporarily squelched the credit market's rate speculation on the taper, if they have not silenced all public consideration by Fed members.

Inflation has complicated the rate picture. Even after the base effect disappears, inflation is going to be sharply higher this year.

Inflation averaging, the Fed’s policy of letting prices rise for a period beyond the 2% target to produce an acceptably higher rate, has eliminated the need to respond immediately to consumer prices.

However, if inflation becomes a widespread and continuing phenomenon, the Fed will have to answer. Bond traders can make that almost mandatory.

The US economy will later or sooner force Treasury rates above 2%, even if inflation does not move above 3% permanently.  Fed policy is preparing for this eventuality.

DXY and the dollar

The Dollar Index, and the greenback in general, followed US Treasury rates higher in the first quarter. 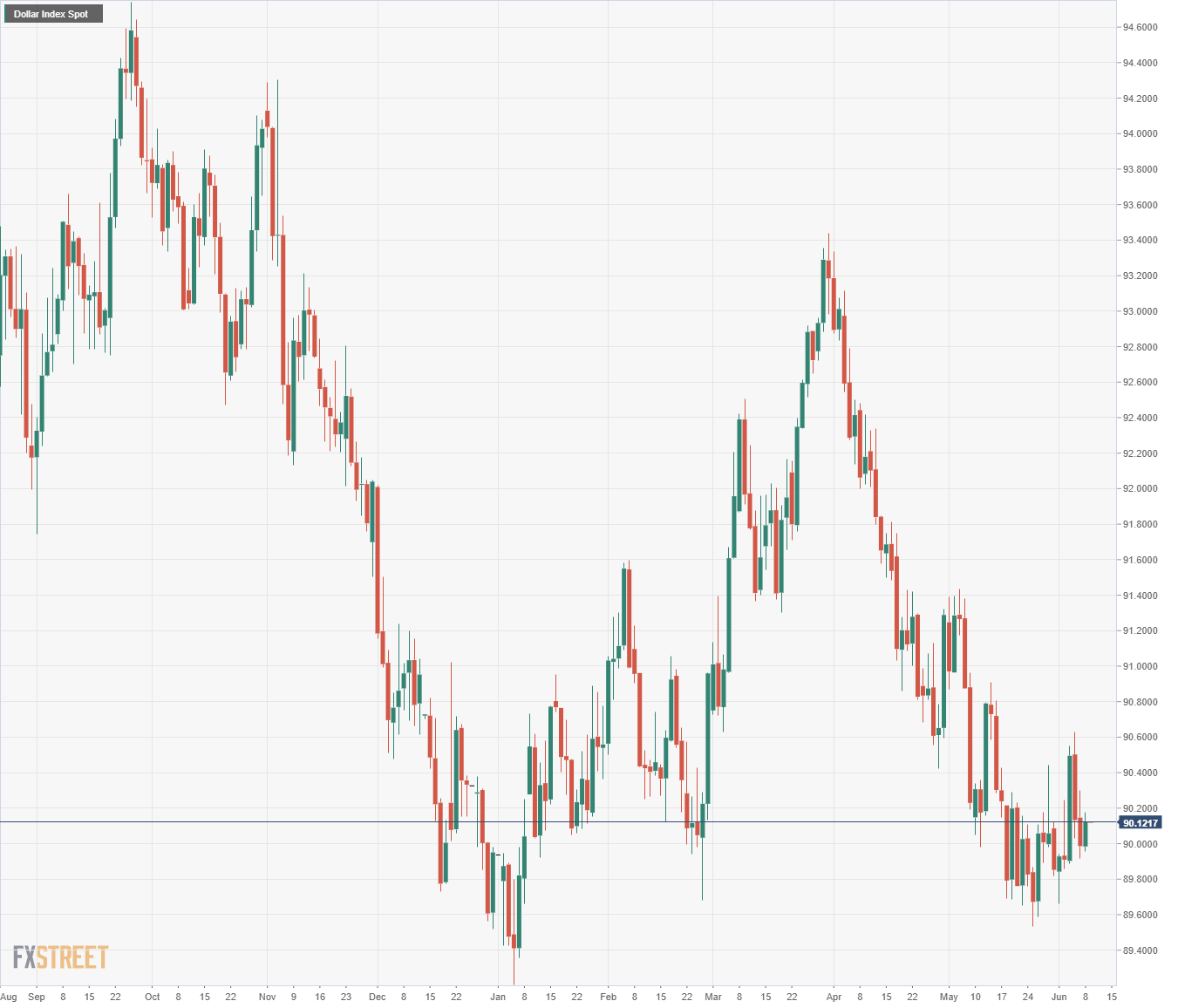 Interestingly, the Dollar Index has lost almost all of its 2021 gains, closing at  90.12 on Tuesday.  The 10-year yield has retained 75% of its first quarter rise, ending at 1.534% on Tuesday. This is another indication that the credit market expects higher US interest rates.

Treasury yields have been the interface between the US economy and currency values.

To the degree that CPI changes perceptions of future Federal Reserve policy, higher inflation can push the dollar higher. Interest rates remain, as they have always been, the strongest factor in currency direction.

Once the base effect of last year’s lockdown is ended, CPI increases will exert a stronger influence on market perceptions and Fed policy.

It is not yet time for inflation to resume its historical primacy in Fed policy. The incomplete rebound in the labor market stands in the way.

If at the end of the third quarter inflation is still running at more than 3%, it will swiftly become a central policy and market concern.