We've had some noticeably hawkish comments from Bank of England officials over the past few weeks. But with Covid-19 presenting a more uncertain near-term outlook, and markets already pricing a reasonable amount of tightening over the next couple of years, we don't expect any firmer clues on future rate hikes, or an early end to QE, at the next meeting.

Will the Bank of England turn more hawkish at its next meeting on 5th August?

This is a question that’s arisen from some unexpectedly hawkish comments from committee members over recent weeks. Outgoing ‘external’ MPC voter Gertjan Vlieghe recently floated the possibility of a 2022 rate hike, while his colleague Michael Saunders went one step further by suggesting the current QE purchase scheme should be wound up early. Both had been among those advocating the possible use of negative interest rates only a few months ago.

These hawkish comments came alongside another upside surprise to inflation. Headline CPI is now at 2.5%, and this most recent rise is only partly explained by rising energy prices and ongoing supply chain issues. We’ve seen a notable increase in the cost of various consumer services after the reopening, which has also been coupled with a bounce-back in clothing prices after heavy lockdown-discounting.

Tax changes and restaurant subsidies from last summer mean the next few readings will be volatile, but the main story is that inflation may now peak close to 3.5% later this year/early next. 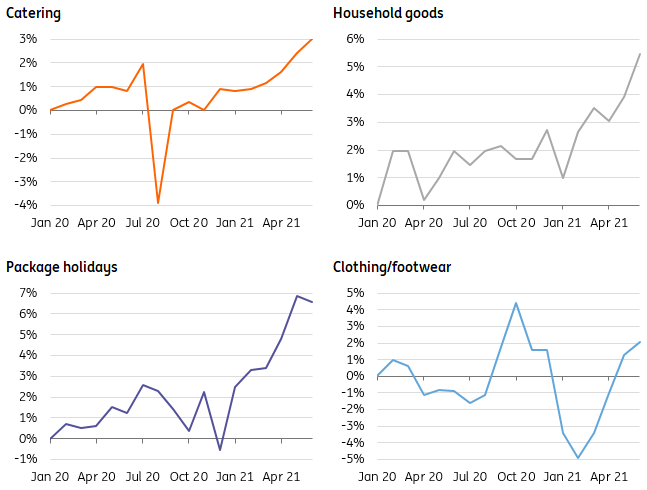 Despite all of that, we wouldn’t bet on the Bank of England changing its tune at the August meeting – nor making any changes to its QE programme.

While the Bank’s recent tone can be characterised as fairly optimistic, the committee as a whole has opted against sending any strong hints about the timing of future tightening in its statements. Indeed policymakers have taken a leaf out of the Fed’s recent playbook by signaling ‘significant’ progress is required before stimulus is removed.

The rise in Covid-19 cases and the associated disruption its causing means the Bank is unlikely to materially alter that message just yet. Admittedly the direct impact on GDP of the third wave will be considerably less than that of spring 2020 and the recent winter. A return to widespread business closures or a form of lockdown seems unlikely, though the tail risk is still there. The point at which hospitalisations will peak remains highly uncertain.

Even without fresh restrictions, mounting staff shortages owing to widespread self-isolation are posing a short-term challenge for various industries. And more importantly, the elevated risk of being ‘pinged’ and increasing chance of catching the virus, means people are more likely to ‘act with their feet’ when it comes to socialising over the summer.

There is already some evidence of this in the high-frequency data, which from Google mobility to card spending, appears to have eased off recent highs in the past few weeks.

It’s worth saying that none of this is likely to justify a more dovish turn from the Bank. Many of the current issues linked to Covid-19 are perceived to be largely short-term, not least because the number of people ‘fully vaccinated’ rates should increase over the coming few months, while self-isolation rules are set to be eased from mid-August.

But the current rise in cases is a reminder that a) the recovery process is unlikely to be smooth and b) the return to pre-virus levels could prove to be a little more gradual than the Bank of England has been anticipating.

Indeed, we’ve recently reduced our third-quarter growth forecast from 2% to 1.5%, with July and August monthly GDP growth rates likely to average around 0.3% (September should in theory get a bit of a boost from education).

Separately, we suspect that policymakers are also probably fairly comfortable with what investors are currently pricing, and if anything the market may be getting a tad ahead of itself. The first 'partial' 15bp hike penciled in around this time next year.

In the past when the BoE has talked up the chances of tightening, for example in the summer of 2017, it’s been because market pricing has been noticeably at odds with what policymakers expect to do. The same is unlikely to be true now.

On QE, we’re likely to see committee member Saunders vote in favour of an early end to the Bank’s asset purchases at the August meeting. This would follow a similar vote by outgoing Chief Economist Haldane in June, where he preferred to reduce the stock of purchases by £50bn, effectively meaning that the Bank would stop expanding its balance sheet a few months earlier than planned (the end of the year).

However we doubt whether many other MPC members will back such a call. Comments this week from Jonathan Haskel and Catherine Mann (the latter taking her post in September), both signaled they remain firmly in the dovish camp. And while the decision to end asset purchases early probably wouldn’t make a huge difference to the economic outlook either way, it potentially risks setting a precedent for future rounds of QE. The 'announcement effect' of future ‘bold’ policy moves may be tempered if investors factor in a chance of the stimulus being removed earlier than planned.

Our Bank of England expectations

While Covid-19 spike will pause the recovery, there's little doubt the economy is in a much better place than it was just a few months ago. More stimulus therefore looks unlikely.

But we also suspect the forthcoming rise in inflation will ease through the middle of next year. And despite talk of staff shortages over recent weeks, we think many of the root causes are likely to prove temporary, meaning it’s too soon to say we’re entering a period of above-target wage growth.

The impulse from fiscal policy also looks to weaken over coming months as various government schemes end, which likely means the recovery process could slow once the reopenings have passed and Covid-19 constraints are largely removed (in so far as that’s possible over the winter months).

For now, we’re penciling in the first rate hike in early 2023, but could envisage that coming forward to the latter part of 2022 if the recovery begins to prove more vigorous - for example if households offload the pool of savings accrued through the pandemic more rapidly.

Read the original analysis: United Kingdom: Why we don’t expect a more hawkish Bank of England next month