In the US today, the releases include September retail sales, industrial output, the U of Michigan prelim consumer confidence and TICS. Retail sales were piddly in Aug, up only 0.6%, and expected up by even less this time, 0.5%. Industrial production will likely do the opposite, rise by 0.1% after 0.4% in Aug, led by manufacturing. But that's the month-over-month. On the year-over-year basis, industrial production was down 7.7% in Aug (for the 12th month, from before the pandemic) and forecast less bad at -6.6% this time (according to tradingeconomics.com).

If the scientists and the data are right—the US is getting a Third Wave—the data for Sept today is irrelevant because we should be forecasting a set of lower numbers for the upcoming three months. Here's the problem—will political leaders call for another lockdown, as in Europe? Some will (New York State) and some will pretend nothing is happening and it's not needed (Upper Midwest). It's possible, just, that the economy limps along despite the Third Wave.

Limping along doesn't make the economic data more valuable, not in the context of the election, now less than 20 days away. The key to the economic outcome of the election is increasingly whether the Dems can take the Senate and boot out the do-nothing Senate leader McConnell. McConnell sabotaged Obama and then the Dems under Trump, sitting on literally hundreds of bills and refusing to let them come to a vote.

McConnell now seems to be sabotaging Trump by refusing to allow a vote on any second stimulus bill, no matter the size. His own seat is safe, not because the contender is unworthy but because he has an iron grip on his voters, who don't examine the issues and vote just for the man. McConnell has zero charisma, so it's bit puzzling until you see the numerous companies, foreign and domestic, basically bribed to move operations to his state, creating jobs. He knows how to pull the levers of power. Still, he's playing a dangerous game, betting on a split vote--Trump out but Republicans holding the Senate.

If McConnell is right and that is the outcome, we will see a replay of the Obama years. Biden will propose and the Senate will vote down or refuse to vote at all. This is not the worst of all possible outcomes—that would be Trump winning—but it's pretty bad. It's bad for the public mindset but bad also for the economy. The Senate Republicans would even pass another tax cut for the rich.

We can do a longer-term dollar forecast—for January—but not a shorter-term one. That's because of the election, of course. The probabilities favor a Biden win and even a trifecta—both houses plus the presidency—is not out of the question. A Biden win means restoring relationships with allies and other important measures of a return to normalcy and respect for the law and institutions. Goldman Sachs chief economist Hatzius expresses the consensus view: "A blue wave would likely prompt us to upgrade our forecasts. The reason is that it would sharply raise the probability of a fiscal stimulus package of at least $2tn shortly after the presidential inauguration on January 20, followed by longer-term spending increases on infrastructure, climate, health care and education that would at least match the likely longer-term tax increases on corporations and upper-income earners."

As for the short-term forecast, put your hands in your pockets. Trump has already said the election will be decided in the courts and unless Biden has a irrefutable landslide, that's exactly what will happen. Historians point out the electoral process was designed this way and long delays have happened in the part, without mentioning that at the time of design the votes were delivered on horseback so delay was reasonable. In 2000, it took a full month for the decision to get made (in favor of Bush, who brought us stupid wars in the Middle East, over Gore, who would have put us into a deep sleep).

If the town halls last evening are any guide, Biden is a shoo-in, although of course only Trumpies and critics watched Trump and only Bidenites watched Biden. Biden was sane, reasonable and responsive to the moderator and audience. Trump was his usual obnoxious self, refusing to answer any questions about his virus tests at any point in time, refusing to disavow white supremacists, and pretending not to know about QAnon. He said the disclosure of his taxes by the NY Times was illegal (it's not) and he had paid far more in taxes, but won't release his own version (meaning there isn't one).

We watched most of both TV "shows" (kudos to the guy who invented DVR) and find it hard to swallow that anyone would prefer this lying, mentally unstable buffoon over Joe. But plenty do, which makes the Founders' invention of the electoral college easier to understand. The Electors were intended to override the popular vote if the people picked a clearly unsuitable candidate. Many believe they didn't do their job in 2016.

The core problem for the FX forecast is that Trump is mentally unstable and getting pushed to the edge by the thought of being a loser. Not only is he going to challenge the vote outcome even before the final count is in, he is going to try to change the vote up to the last day. Tigers and stripes. It may be China or a last-minute "expose" of some crime Biden supposedly committed or something else we can't imagine now but will appear totally consistent with Trump's cheating playbook once we see it. The only way Trump can win is if he cheats. So, cheat he will.

Amidst all this anxiety and uncertainty, what will the stock market do? We still think it will recover next week and into the election, and rally like crazy if Biden wins. That means the current safe-haven dollar bid can fade next week, almost regardless of data or Covid or the vanishing second stimulus.

See The Economist Magazine's latest take on the election—is it enough to soothe the dollar back into a downward trajectory? 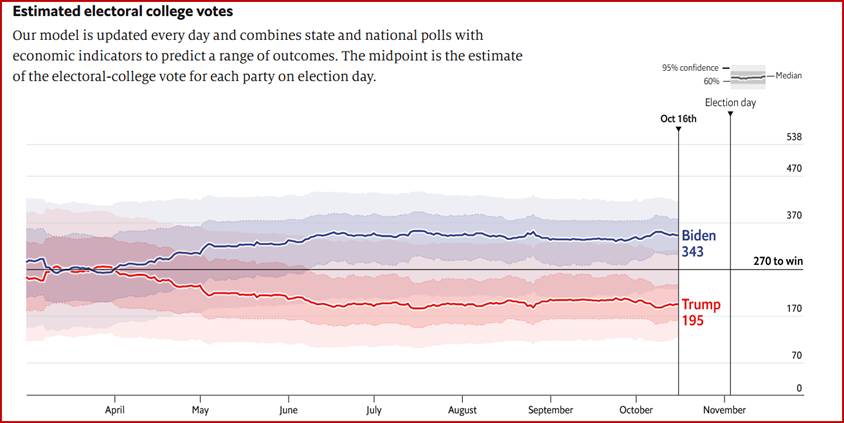