Retail sales in the U.S. offered a positive surprise last week when September print came out better than expected +1.9%, versus the expectation of +0.7% (m/m). U.S. consumers have been supported by the Federal government in the form of direct payments but also unemployment benefits since the CARES act was approved in April 2020. Consumer spending accounts for about 70% of U.S. GDP, hence both consumer confidence as well as retail spending tend to get a lot of attention from market participants to gauge the sentiment of the world’s largest middle class.

Better than expected print took the markets by surprise although USD, measured by DXY index, had a lukewarm reaction, moving 0.3% lower on Friday. Given the number of other developments, from the Presidential elections to potential stimulus bill approval, this is hardly a surprise –markets are overwhelmed by the news flow.

Breaking down the retail sales number we can see that the largest contribution (+73 bps) came from autos. Autos and auto parts contribute the largest share to overall retail sales data (around 20%) and September was a decent month as this line item gained +3.6%. Complementing autos is gasoline spending, which contributed a modest +10 bps. Autos and gasoline are still down on YTD basis, -1.6% and -16.4% respectively.

Another significant contribution was from the clothing and accessories sector (+30 bps) that may potentially be explained by the change in seasons as we are heading into autumn. Clothing is down on YTD basis whooping -32.6% (the largest drop among retail sectors) which can be explained by lockdown and working from home eliminating the possibility and need to shop new outfits.

The third significant contribution was from restaurants that was up +21 bps. Food and beverage sector has taken a hard hit in 2020 with lockdowns and is down by -20.1% on YTD basis (the second largest drop among retail sectors).

Department store sales (part of general merchandise stores) and sporting goods were up by 9.7% and 5.7% respectively in September, contributing 21 bps and 7 bps to overall retail sales.

One final observation is in relation to non-store retailers, i.e. e-stores – whilst September contribution was a modest 7 bps, this line item is up +20.5% on YTD basis which is also the biggest gain among retail sectors.

It looks like consumers have enjoyed discretionary purchases in the month of September, spending money on autos, outdoor meals and clothes as we are nearing winter and potentially an economic winter! Given the discretionary nature of the gains this month, we would be mindful that the approval of stimulus bill; which is being voted on by the Senate during the time of writing this report, may have a significant impact on October’s data. 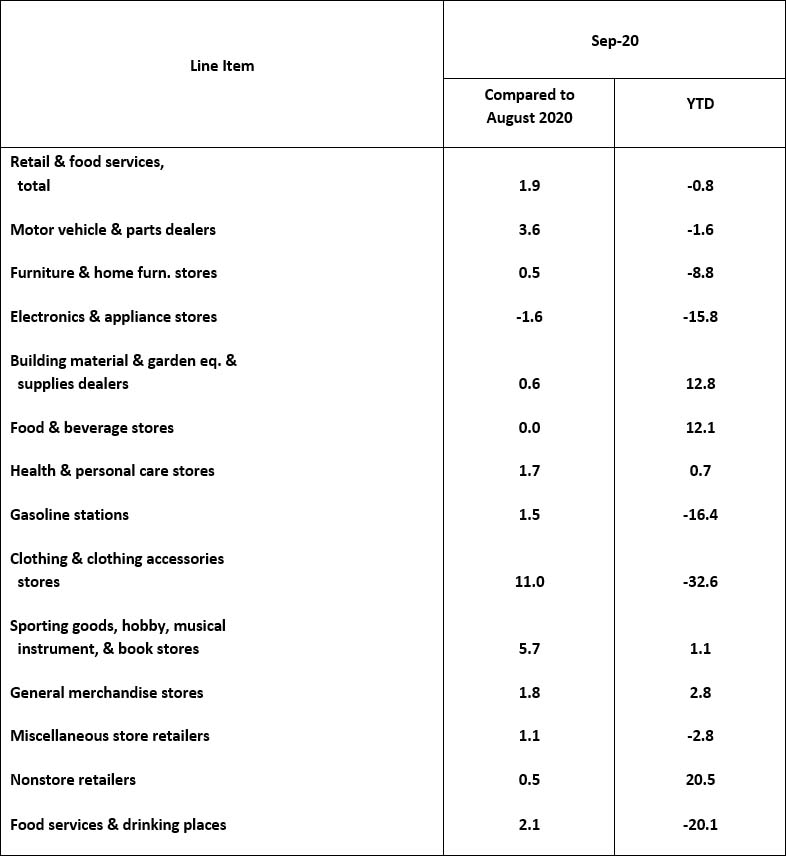 AUD/USD keeps its range near two-month highs of 0.7375 despite a big miss on the Australian Q3 Capex data. The bulls retain control as the US dollar remains on the back foot across the board, in the face of renewed US economic growth concerns.

USD/JPY’s bounce loses still in Asia on Thanksgiving Day, as the bulls lack follow-through amid holiday-thinned market conditions. US markets are closed Thursday in observance of Thanksgiving Day. DXY wallows in two-month lows on mixed US data, covid surge.

Gold hovers within the range of Wednesday's Doji candle

Markets return to normal, and traders may be loving it

Calendar comeback – currencies begin moving to the tune of economic indicators, a welcome return for traders. Valeria Bednarik, Joseph Trevisani, and Yohay Elam discuss the latest market moves and what to expect in the final stretch of 2020 and beyond.