Following a previous article on the crypto-currency boom, this article takes a more in-depth look at one of the upstart challengers to Bitcoin's current status as the market's leader, IOTA.

Unlike other Cryptocurrencies, IOTA is not based on Blockchain technology, but on a structure called Tangle, which is based on a directed acyclic graph (DAG). Although DAG is difficult to put in layman's terms, essentially it means IOTA's underlying structure is interrelational and tree-like, as against the direct linked chain system of Bitcoin and its peers.

Two things mark IOTA out as an interesting proposition for a crypto-currency investment, the fact that Tangle is scalable and has no transaction fees, and the fact that the start-up currency, as its name refers to, is built for a purpose: the Internet of Things (IoT).

The Internet of Things & Tangle

The IoT is a buzzword that has been growing and growing in its ubiquity for years. Of late, the underlying IoT market, however, has really started to take off. The IoT is, for those who don't know, precisely what it sounds like, the connection of non-IT specific objects to the internet in order to improve their functionality. Think Smart Applications: Smart-kitchens, trackers, lighting systems, thermostats, home-energy monitors, or, of course, Amazon's Echo and Alexa.

The IoT market is set to experience huge growth over the next few years, growing at a CAGR of 28.5%, approaching a total value of $460bn by 2020. What the IoT needs, however, is a ledger of the micro-transactions the eco-system will employ, for purposes including security, machine to machine transactions, and automated process execution.

Currently, a huge number of firms are investing in Blockchain technology (as used by Bitcoin) as an encrypted ledger system. This technology, however, runs into two problems when dealing with the huge degree of scales the IoT is likely to need.

First of all, given Bitcoin's total quantity-cap, and the high level of data-mining and administration required, transaction fees are likely to rise, undermining the benefit of making small-scale transactions, one of the currency's selling points.

Secondly, Bitcoin is not necessarily wholly scalable. It is arguably more a proof of concept that has taken off like a rocket. The currency's continued demand for ever more processing power, so that its transactions can be processed, is a worrying longer-term warning bell.

Presently there are, for instance, over 152,000 unconfirmed Bitcoin transactions, although to be fair they are being processed at a rate of 11 per second. Yet, given the fact that micro-transactions, and indeed the day to day person to person transactions we might want a crypto-currency to handle, are likely to require rapid confirmation and approval, and are also likely to grow significantly in number, a lack of scalability in terms of both size and speed is a significant weakness of the present Bitcoin protocols.

Enter Tangle. Tangle, based on the aforementioned DAG technology, like Bitcoin, is based on a distributed database, with information spread throughout the cloud, and shared peer-to-peer, but instead of a vast network crunching the data, two transactions are referenced and sorted when each new transaction is made. This significantly reduces the uncertainty relating to processing costs and speed, and involves the whole network, rather than a small subset of it, in the processing required to keep the system flowing and secure. The key reason this is important is that this means that IOTA has no transaction fees. IOTA is therefore the first platform for micro-transactions that enables sub-cent value transfers to operate without the kind of financial hindrance that meant the kind of technology that requires an eco-system of small-scale transactional payments could never get off the ground. That IOTA has an absolute purpose, and a target-market, marks it out as a very interesting play in the crypto-currency market. 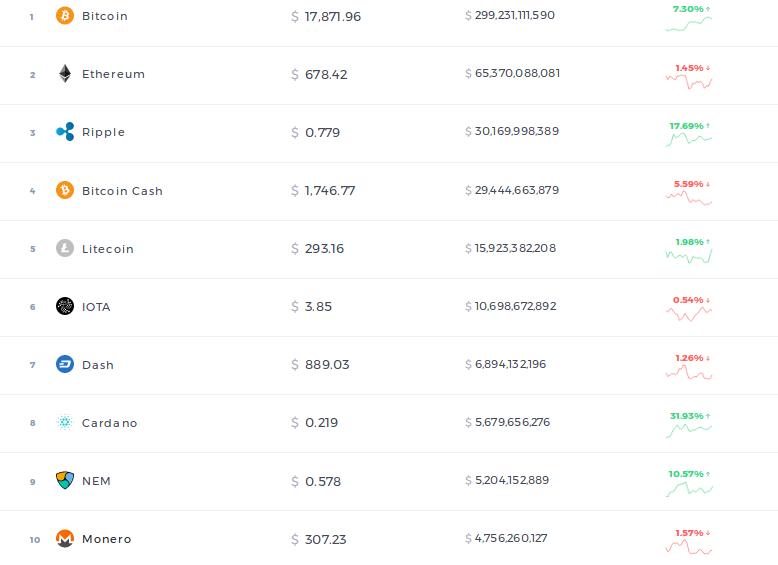 What's in a name?

Recognition of a brand name is important in business, especially when it comes to who handles your money. Putting aside the fact that investing typically generates far better returns than saving, consider the fact that Internet-only banks offer interest returns of up to 142 basis points, but most savers stay with their brick-and-mortar savings accounts that pay little to no return. Companies like Visa and nowadays PayPal also benefit from being recognised and ubiquitous.

Having the cachet a name generates, especially when it comes to keeping people's money safe, is significant when it comes to staking a claim to a place in the transactions eco-system. Until recently, no one had heard of IOTA, and that's a big-deal, yet the recent crypto-currency reportage boom has seen IOTA climb the crypto-rankings to being the sixth most traded currency, meaning people are starting to get on board with it. This accepted, given the currency's practical applications, it seems a fair bet to expect its value to continue to rise. 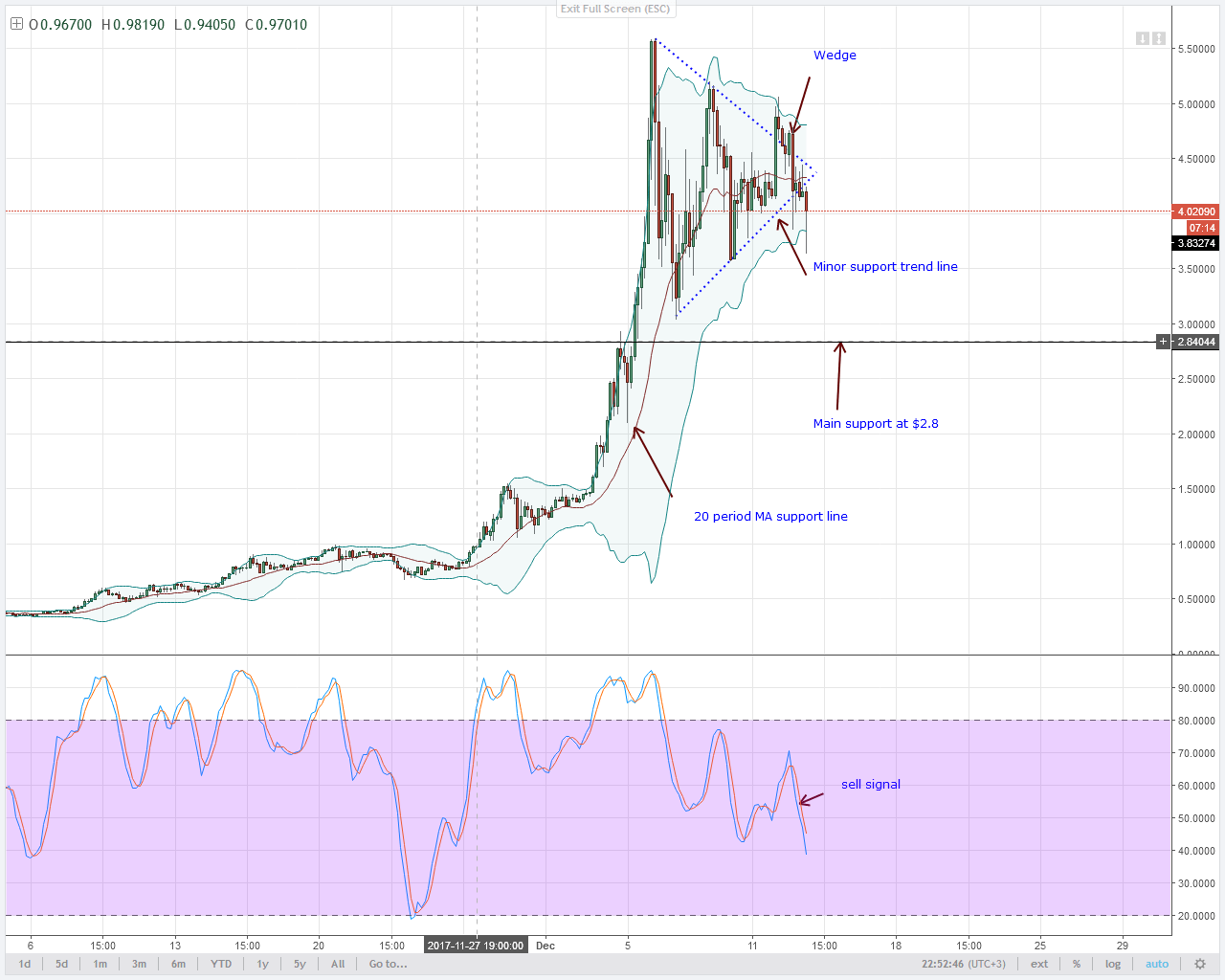 Currently IOTA is trading at a price of $3.85, which marks a sharp downturn for the crypto-currency since it tested $5.50. Some analysts are even suggesting that the currency could fall as low as $2.80. Such falls come on the back of a rise in the strength of crypto-currency bears, with the impact felt more strongly in trading of Bitcoin's lower-capitalized competitors. In addition to the impact of bearish sentiment, recent false rumours of Microsoft's involvement in the currency as a partner, as against as a participant, worked against that $5.50 valuation. Despite this, such falls ought to be taken in the context that the currency has recently experienced a price surge of up to 600%, climbing from $1 to the aforementioned $5.5 rate.

A Coin to Catch or Toss?

Ultimately, as we wrote in our last article, the crypto-currency market very much looks like a bubble, however with a steady stream of new users and investors still likely ahead, it does not look set to burst quite yet. Nevertheless a crypto-currency investment is highly risky for this reason. This accepted, if you are willing to increase your exposure to risk, there are two strong reasons to consider adopting or upping your IOTA holdings.

First of all IOTA retains a lot more scope for the kind of significant growth that made Bitcoin famous. After all, it isn't likely that Bitcoin is going to quadruple in value yet again, at least not in the foreseeable future. IOTA just might.

Secondly, as outlined in this article, while many crypto-currencies are still in search of a purpose, IOTA has its niche very much already in mind. Thus the currency stands a good chance of pulling through to the later stages of the cyrpto-consolidation that must eventually occur. This being the case, while bearing the risks in mind, taking a long holding in IOTA might well be a play worth making.