Crypto could well be one of the words of 2017. Granted for those who have been involved with technology for some time, the term is old-hat, and indeed it has older uses as an often critical prefix. What has catapulted the term front and centre yet again, as we all know, is Bitcoin. The crypto-currency has been big news for some time. Moreover, anyone with a foot in the technology sector will know someone who rode the Bitcoin bandwagon from the beginning, who is now sitting back and smiling. This being the case, it is no surprise to see the currency zoom higher as more and more people hope to make a rapid return. In May 2010, one Bitcoin was worth $0.01. Now, one Bitcoin is worth just under $10,000. Working out the percentage is unnecessary. That's some return.

This year, Bitcoin is both the next bubble about to burst, and emblematic of a long-term trend. Perhaps Forbes got it quite right when they suggest that “Bitcoin might be a bubble, but digital currencies are not.” Regardless of the world's most famous crypto-currency's ultimate fate, it is extremely unlikely that digital currencies are likely to find themselves side by side with the dodo on a set of slides depicting what might have been.

When all is said and done, despite the bluster on both Bitcoin bull and Bitcoin bear sides, one key investment concern does highlight the risk inherent in an investment in the currency: people are buying it to make a return, not because they value the underlying product. When this happens, the argument that we're in bubble territory gains legitimacy. 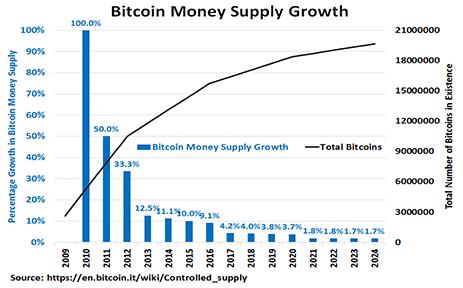 The Case for a Bitcoin Bubble

The simplest case that can be made for a Bitcoin bubble is that what goes up, must come down, though making a bearish case on such a statement would be trite in the extreme. The key take-homes from a bear case on Bitcoin are that the market is over-heated, that it resembles a bandwagon full of investors with little idea of why Bitcoin may exist, and that until a major reason for the currency's existence comes into view, outside of 'it's the future' and organized crime, there seems little real-world reason for its value.

Analysts at Bespoke Investment Group state that we are now “seeing [a] classic herd mentality that has pushed the entire space into a bubble that is bound to burst at some point.” Amusingly, they also suggest that if Campbell's Soup (CPB) were to adopt Blockchain, the protocol behind Bitcoin, then “it would probably double or maybe even triple!” 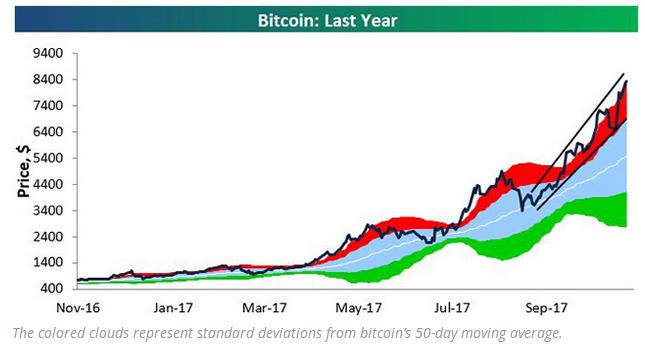 Ultimately, it's hard to argue with the fact that Bitcoin does appear to be in a bubble. That said, it is equally difficult to gauge when the bubble will burst, and whether Bitcoin itself will prove to be the crypto-currency with staying power over and above all its competitors. Right now, we're in a situation whereby the imitators have now really started springing up. Articles titled 100 descriptions of crypto-currencies in less than four words are easy to find with a quick Google search.

That an online currency or transaction process will eventually become the proverbial gold standard seems inevitable, but as many have said, an investment in Bitcoin is, in some ways, presently more similar to an investment in an asset than a stock, given the currency's current lack of absolute real-world application, and how zealous some long investors like Mike Novogratz are. For the record, Novogratz has just launched a $500m fund to invest in crypto-currencies as an asset class.

The logic behind the bearish case is clear and simple. It is always a good idea to take your profits and step out of the market, when a stock becomes the chat around the water-cooler. Yet, in less mainstream circles, this argument has circled the crypto-currency for some time. Prudence suggests that steering clear of Bitcoin is the wisest course, but there remains the possibility that this currency, which has already delivered the kind of long returns that are the stuff of dreams, might continue to be an interesting long-holding.

Simply put, one of the biggest things Bitcoin has going for it, aside from the buzz, and the sense of futurity, is its supply limit. Bitcoins have to be mined, which means they must be discovered through a long and complex set of mathematical operations. These operations get harder and harder all the time as they approach a finite number of available coins. Only 21 million can be 'mined', in what is essentially a coded controlled supply system. Now, whilst this limit could eventually be changed, and transactions can also be made in ever smaller amounts, for the moment supply limits will buttress longer-term Bitcoin gains. 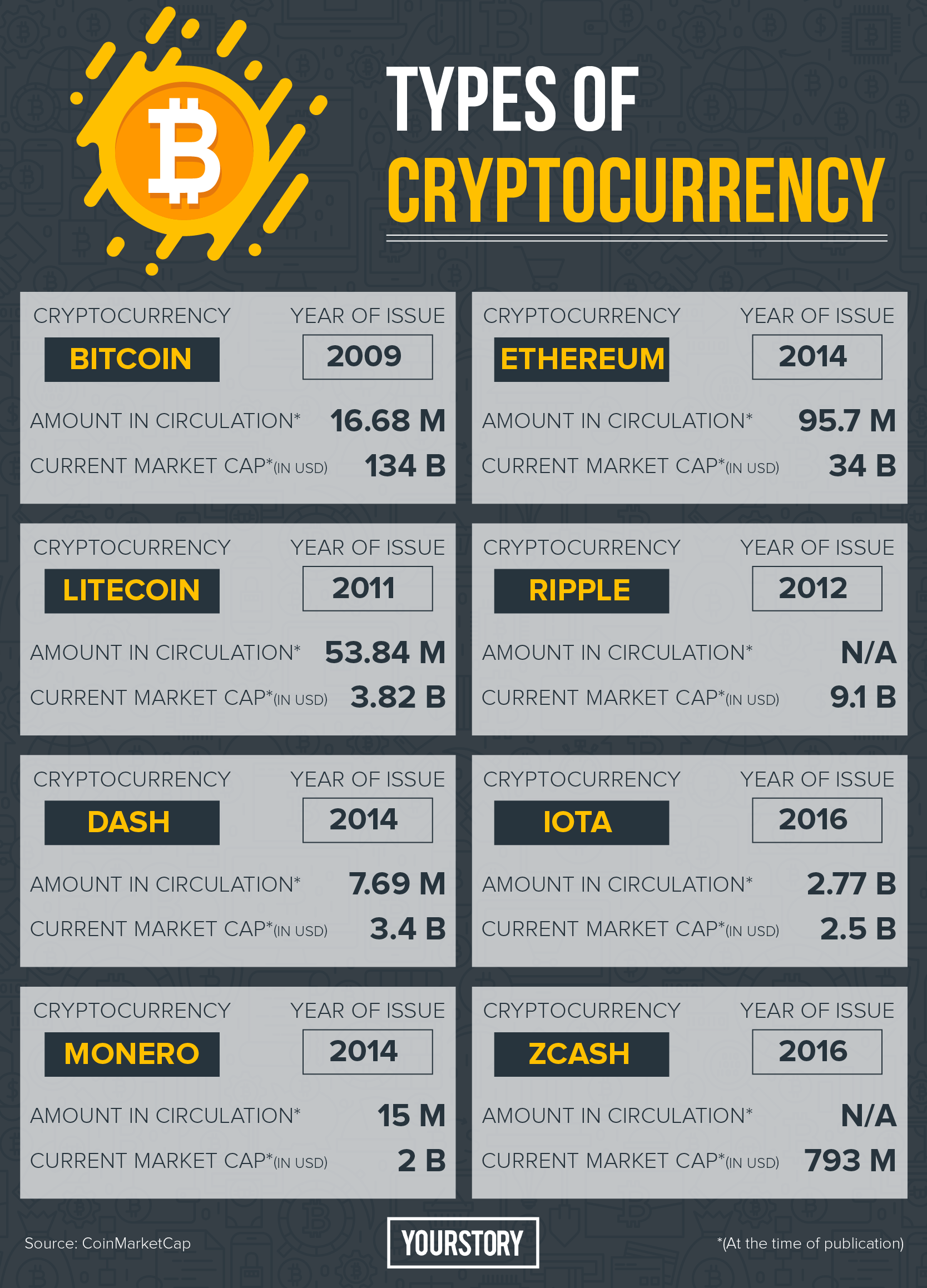 Simply put, one of the biggest things Bitcoin has going for it, aside from the buzz, and the sense of futurity, is its supply limit. Bitcoins have to be mined, which means they must be discovered through a long and complex set of mathematical operations. These operations get harder and harder all the time as they approach a finite number of available coins. Only 21 million can be 'mined', in what is essentially a coded controlled supply system. Now, whilst this limit could eventually be changed, and transactions can also be made in ever smaller amounts, for the moment supply limits will buttress longer-term Bitcoin gains. 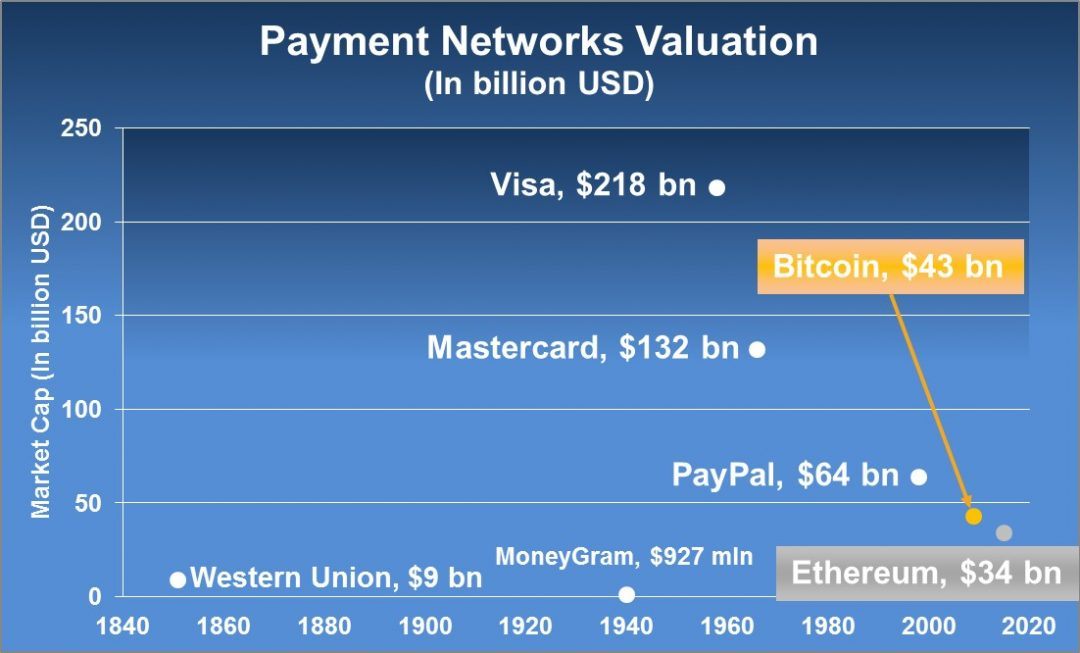 "Bitcoin is becoming more like an asset class rather than a method of payment,” says Danielle Bianchi, Assistant Professor of Finance at Warwick Business School. “This is something that the public and regulators should realize to fully understand the price dynamics of Bitcoin. As the supply of Bitcoins is kept fixed by the underlying protocol, price increases are essentially due to increasing demand.”

What stands out most however is the fact that there are longer-term plans on the go for investors who have yet to make their returns from the crypto-currency. Nasdaq plans on launching Bitcoin futures next year, and plenty of investors still want to whet their beak. Bubble or not, a lot more money is likely to pour into the currency before it bursts. Indeed, David Drake of LDJ Capital believes that a $20,000 valuation by the end of 2018 is not unlikely.

One of the core investment theses behind Bitcoin is the fact that Arthur Hayes, former CitiGroup trader, and the man behind the BitMEX exchange, observes that “a digital society needs digital cash.” Whether this cash takes the form of Bitcoin, another crypto-currency, or a “digital fiat” run by banks, is another matter, but with the battle only getting started, there is likely to be a lot more energy in the Bitcoin run.

Further bolstering the bull position is today's announcement by the CFTC that three exchanges will be allowed to self-certify and sell Bitcoin futures. 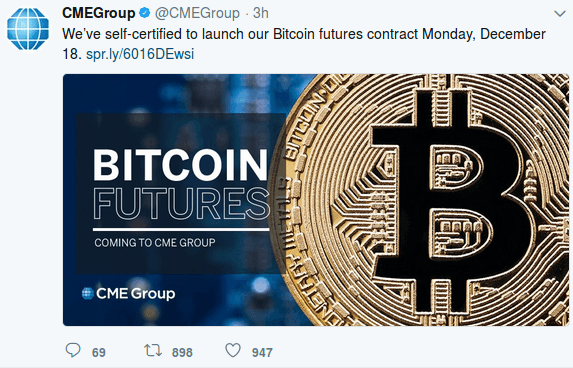 Until Bitcoin becomes more coherently useful in and of itself, and until it, or another crypto-currency can establish itself as the gold-standard, most of the purchases in the crypto-currency area are speculative. That said, this is the same argument many, including myself, have used against Tesla (TSLA) for some time, and Elon Musk's firm have consistently confounded the doubters. With so much investment still on the sidelines and desperate to get in on the action, there may be prudence yet in dipping your toe in the Bitcoin market. Wiser still might be to consider an investment in younger pretenders like Etherium, which has climbed by 5000% this year, Monero, or the intriguing Iota that is the only major crypto-currency not based on the underlying Blockchain protocol. 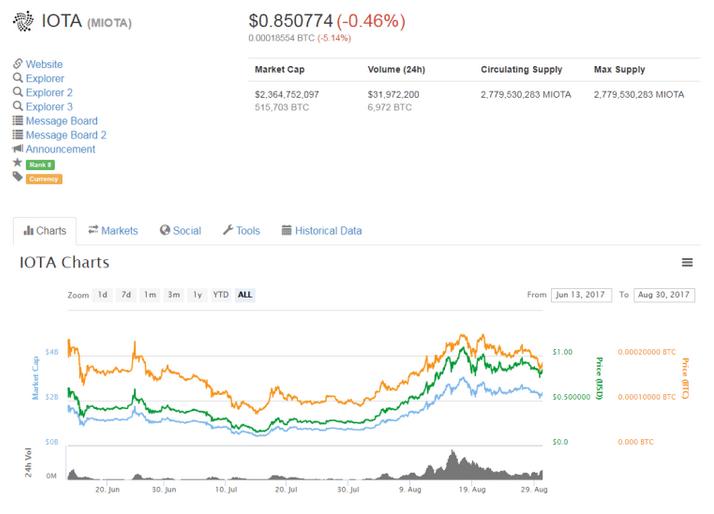