Yesterday’s session gave us a resolute follow-up to Tuesday’s reversal. Price sliding like there is no tomorrow, the bears keep pushing even lower today. Not a bit lower, but very much so lower. As black gold is trading at around $54.20 as we speak, is it time to look for the exit door in our promising open short position? 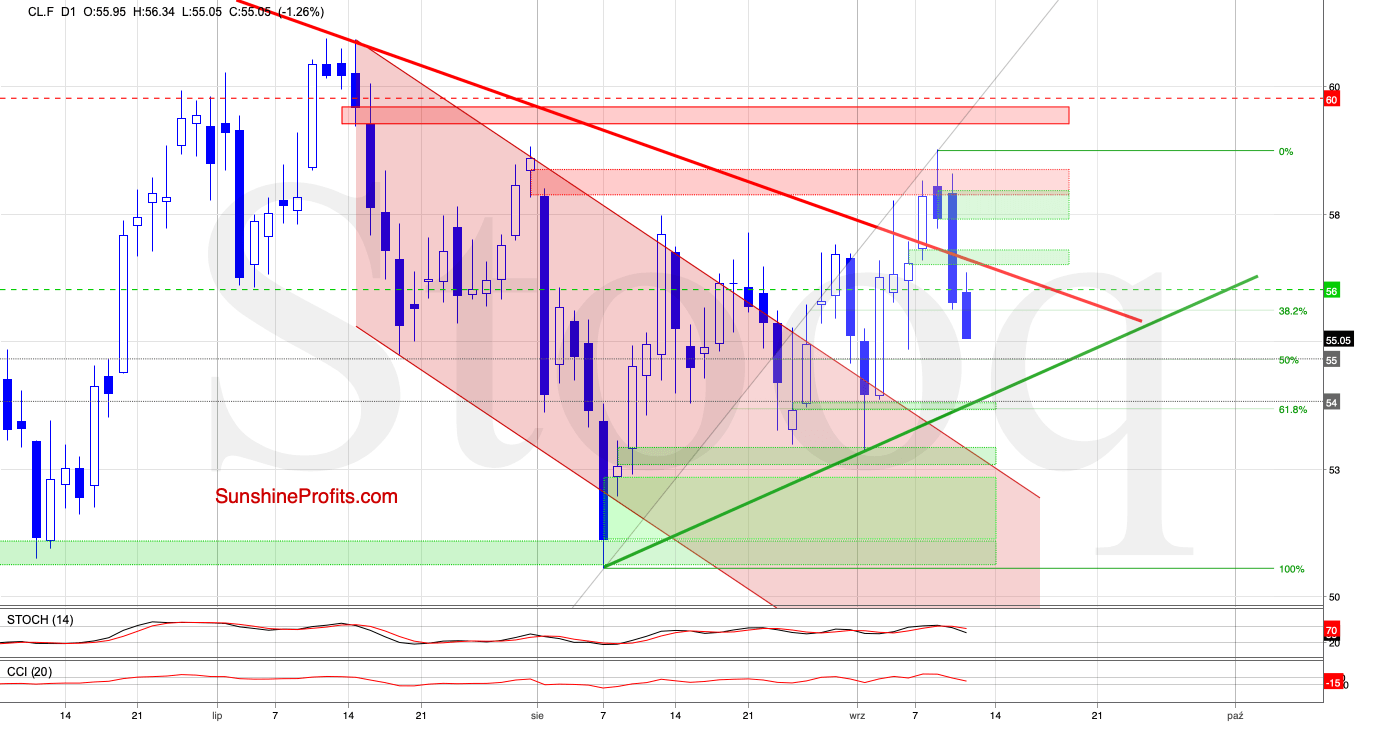 (…) the bulls failed to break above the late-July peak. It suggests that we could see a post double top decline in the very near future – especially when we factor in the fact that the red gap created at the beginning of August remains open.

Earlier today, crude oil futures opened the day with the green gap, which triggered further improvement and another test of the red gap. While this is a positive development for the bulls, as long as the above-mentioned resistances remain unbeaten, another bigger move to the upside is questionable. This is especially the case when we factor in the 76.8% and 78.6% Fibonacci retracements based on the mid-July-August downward move, which reinforce the area around the late-July peak.

Additionally, the CCI and the Stochastic Oscillator moved to their overbought areas, increasing the probability of reversal in the very near future.

As a result, the sellers pushed the futures below the previously-broken declining red line, invalidating the earlier breakout above it. Black gold also finished the day below the Sept 6 final price, which means that the green gap created at Sept 9 was closed. This is a strongly bearish development.

The CCI and the Stochastic Oscillator generated their sell signals, giving the bears even more reasons to act. That also supports lower crude oil prices.

Earlier today, the bulls unsuccessfully tried to push the futures higher. Their failure translated into another move to the downside. As a result, the bears took the commodity below yesterday’s low, which suggests a test of the 50% Fibonacci retracement (at around $54.65) or even a decline to the green support line based on the previous lows (currently at around $53.82). And they have already achieved the first objective.

In the green support line area, the sellers will have to overcome an additional support – the green bullish gap created on August 27, which withstood the selling pressure at the beginning of September.

Connecting the dots, our short position continues to be justified from the risk/reward perspective.