A tumultuous start to 2021 will see the US publishing this Friday its monthly employment report. The December Nonfarm Payroll is expected to show that the country added just 100K new positions in the month, although the unemployment rate is foreseen steady at 6.7%. Average hourly earnings are expected to have grown by a modest 0.2% MoM, while the annual figure is foreseen unchanged at 4.4%.

Noise from the fundamental side

The once first-tier economic release has been losing its power to impact financial markets in the last few years.  Initially, because the sector was steadily healthy, and later, within the pandemic scenario, because the worst-case outcome has been widely anticipated.

These days, markets are getting boosted by vaccine hopes, which speculative interest translates into an economic comeback in the second half of this year. Massive stimulus provided by governments and central banks, also fuel demand for riskier assets in detriment of the greenback.

Meanwhile, political chaos in the US continues. The Senate finally confirmed Joe Biden’s victory, after the Georgia runoff was won by Democrats, which now control both chambers. Current US President Donald Trump keeps claiming the election was fraudulent, although it hasn’t been proved. His supporters stormed Capitol on Wednesday and things got out of control. Nevertheless, financial markets have shown little reaction to the events, and Wall Street kept rallying to all-time highs.

Market’s expectations are aligned with leading indicators, which anticipate a soft job’s creation in December.  The country added just 245K new positions in November, with the main figure on a downtrend ever since topping at 4.78 million in June.

Initial Jobless Claims are pretty much stable above 800K per week, with some exceptions at the end of the year, amid shortened holidays’ weeks.

Worrisome clues have from consumer-related behavior, as Consumer Confidence indexes remain in retreat mode and well below pre-pandemic levels. The spread of the coronavirus in the US is affecting consumption beyond restrictive measures coming from local authorities.

The greenback is temporarily strong across the board, but it remains far from bullish as it trades near its recent multi-month lows against most of its major rivals. In the meantime, US indexes keep rallying to record highs, with the DJIA above 31,000 for the first time ever and the S&P trading at around 3,750.

Further dollar’s gains are likely, but only in the near-term. Risk aversion could return if the report comes worst than anticipated, and favour the American currency. Still, the EUR/USD pair holds in its latest comfort zone around 1.2250, and dips will attract buyers.

USD/JPY will likely follow the lead of yields while commodity-linked currencies will move alongside equities. 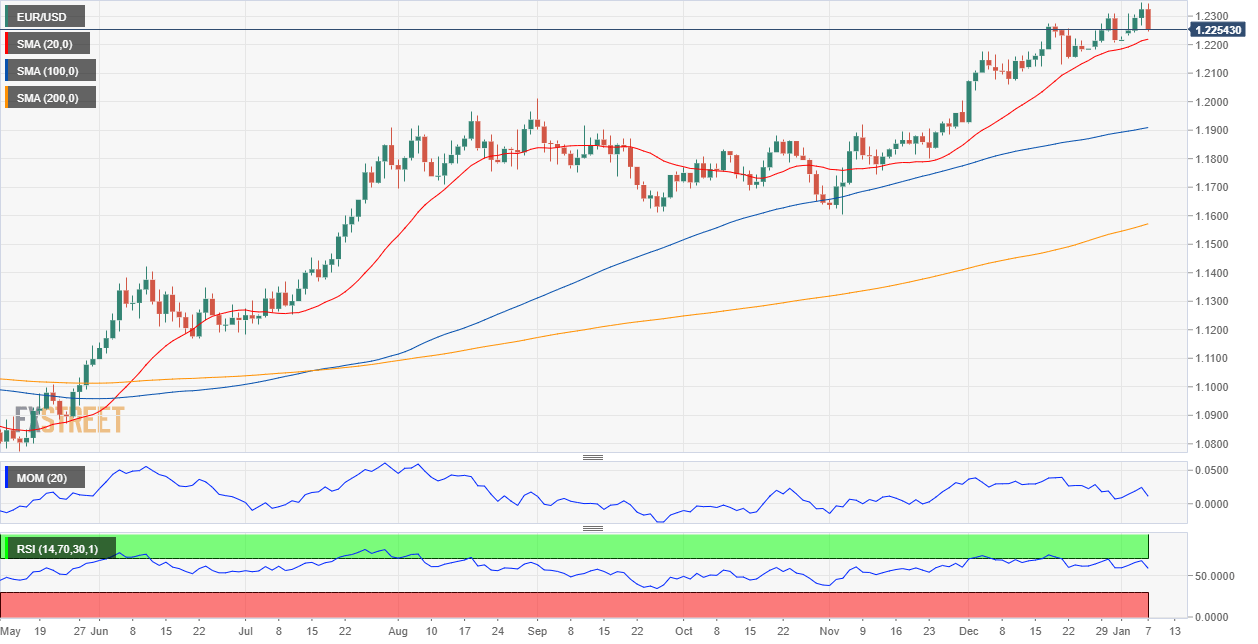