At this time all of Asia is trading Lower.  Currently Europe is trading mainly Lower with the exception of the Milan exchange which is Higher at this time.

Yesterday the ZB made it's move at around 9 AM EST.  The ZB hit a Low at around that time and the S&P moved Lower.  If you look at the charts below ZB gave a signal at around 9 AM and the S&P moved Lower at around the same time.  Look at the charts below and you'll see a pattern for both assets. ZB hit a Low at around 9 AM EST and the S&P was moving Lower shortly thereafter.  These charts represent the newest version of MultiCharts and I've changed the timeframe to a 15 minute chart to display better.  This represented a Long opportunity on the 30 year bond, as a trader you could have netted about 15 plus ticks per contract on this trade.  Each tick is worth $31.25.  Please note: the front month for the ZB is now June '20.  The S&P contract is now June '20 as well.  I've changed the format to Renko bars such that it may be more apparent and visible. 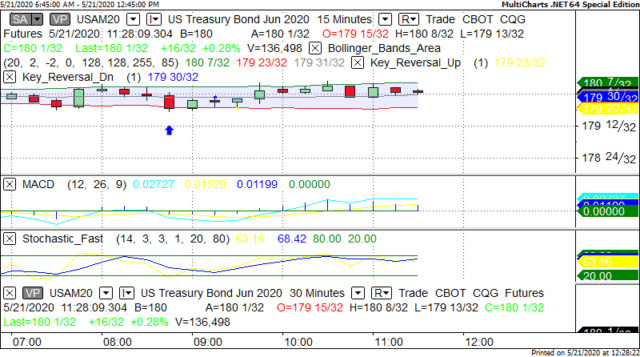 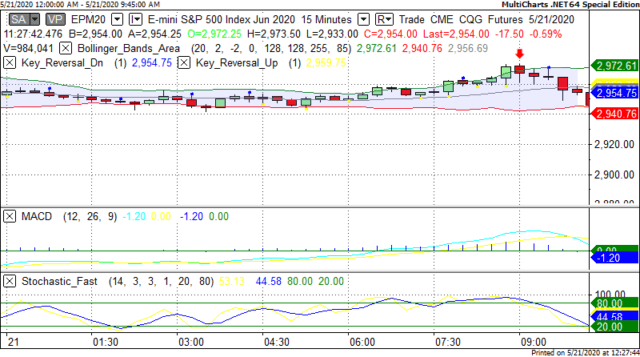 Yesterday we gave the markets a Downside bias as the USD, Crude and the Bonds were all pointed Higher and this does not bode well for an Upside day hence the Downside bias.  The markets didn't disappoint as the Dow dropped 102 points and the other indices lost ground as well.  Today we aren't dealing with a correlated market and our bias is to the Downside.

Well Memorial Day is here and as such it is the unofficial start of summer.  We will see many beaches open to the public and hopefully they're wearing a mask.  Whereas Memorial Day is loaded with celebration, the truth is it's a day to honor the war dead.  So if you know a veteran, give them thanks.  They bought the freedom we so richly enjoy.  Yesterday we witnessed a news tsunami with 10 different economic reports and not all of them were bad.  Existing Home Sales came in nicely and in fact beat the estimate.  Today we will probably see traders heading for the exits early to get a jumpstart on the holiday weekend.  As such we will be back on Tuesday, May 26th.  Enjoy the holiday and stay safe!!!!