Although it didn’t appear to be a breakdown, silver just closed the day (and week) at a new yearly low. Remember the day when silver moved briefly below $14? Ultimately, silver futures closed at $14.15 on that day, and they just closed at $14.14 on Friday. So little, yet so much. Breakdown confirmed by weekly closes is something very significant and yet, it’s not the most important thing that we will comment on in today’s analysis. The key details will come from the gold market. Let’s move right to it (charts courtesy of http://stockcharts.com). 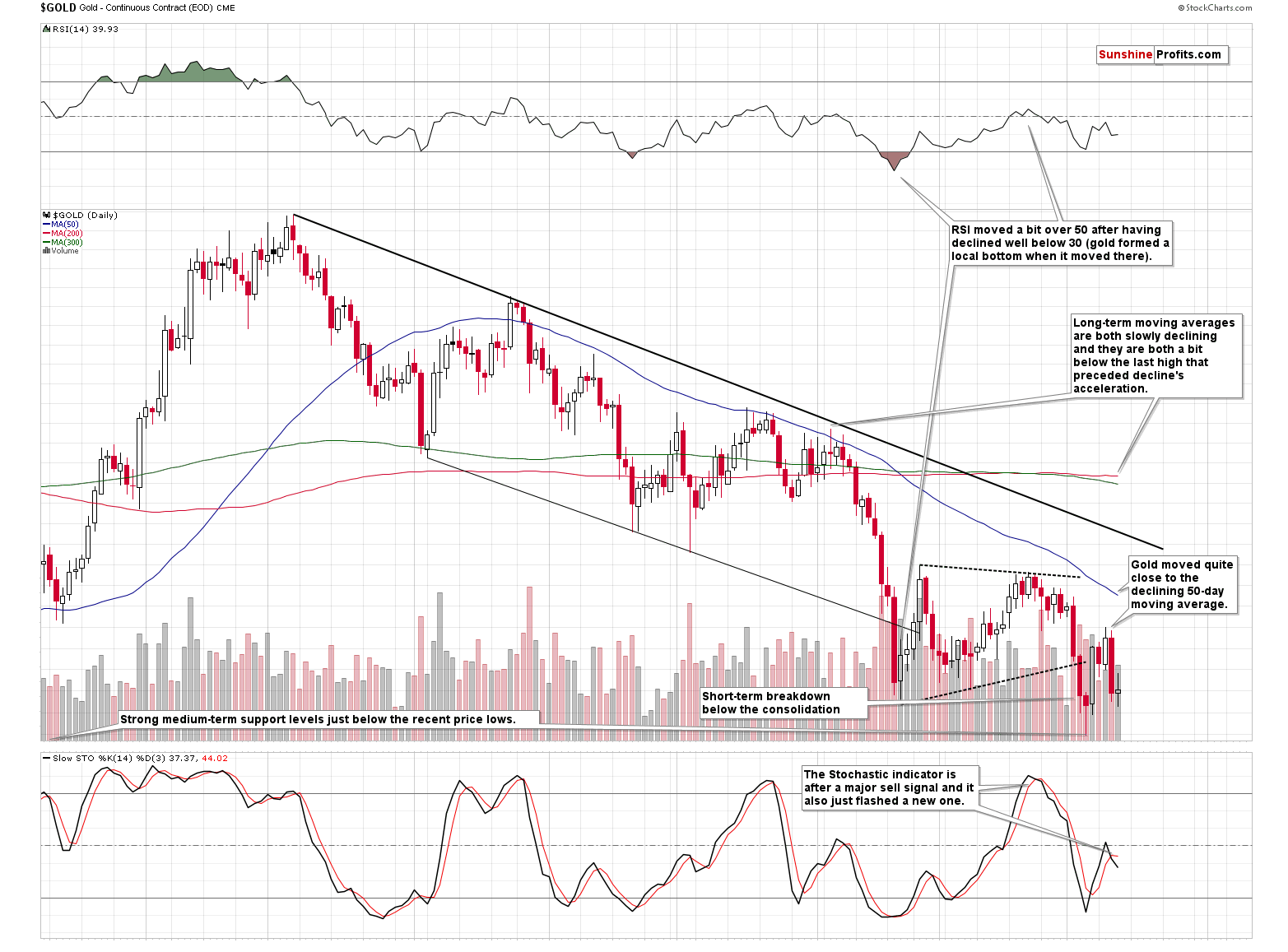 Gold moved back and forth lately as it’s been consolidating after the recent sharp decline that took gold to the medium-term support levels (even a bit below some of them) and the declining thin black support line (based on the previous lows).

The yellow metal moved close to its 50-day moving average (staying below it) and it’s still far from the declining black resistance line, which suggests that the trend remains down and that everything that we saw recently is just a pause within a bigger decline.

The Stochastic indicator already confirmed that the major short-term top is already in and we just saw another move lower in it, after it moved above the middle of its trading range.

Moreover, gold already broke below the consolidation pattern marked with dashed lines and even though it moved very briefly back into the pattern, it closed the last two sessions visibly below it.

Some will say that what we’re seeing is just a prolonged bottoming pattern and what we have now is the first post-bottom pause. But we disagree. Based on multiple other factors, including severe underperformance of gold stocks, the gold price projection remains strongly bearish. The yellow metal appears ready to decline once again.

But, we don’t have to convince you that the above is the case. The odds are that you already convinced yourself, without realizing it.

What has been will be again,

what has been done will be done again;

there is nothing new under the sun.

Did you notice the dates and price levels on the above chart?

You didn’t notice them, as they are not there, and the reason they are not there is that we wanted you to focus on the shape of the price movement and many other factors. The above chart does not feature the current price of gold.

Everything that we wrote above is true and correctly describes the current situation on the gold market, but… It features a different period from the past. Here’s what the current gold chart looks like: 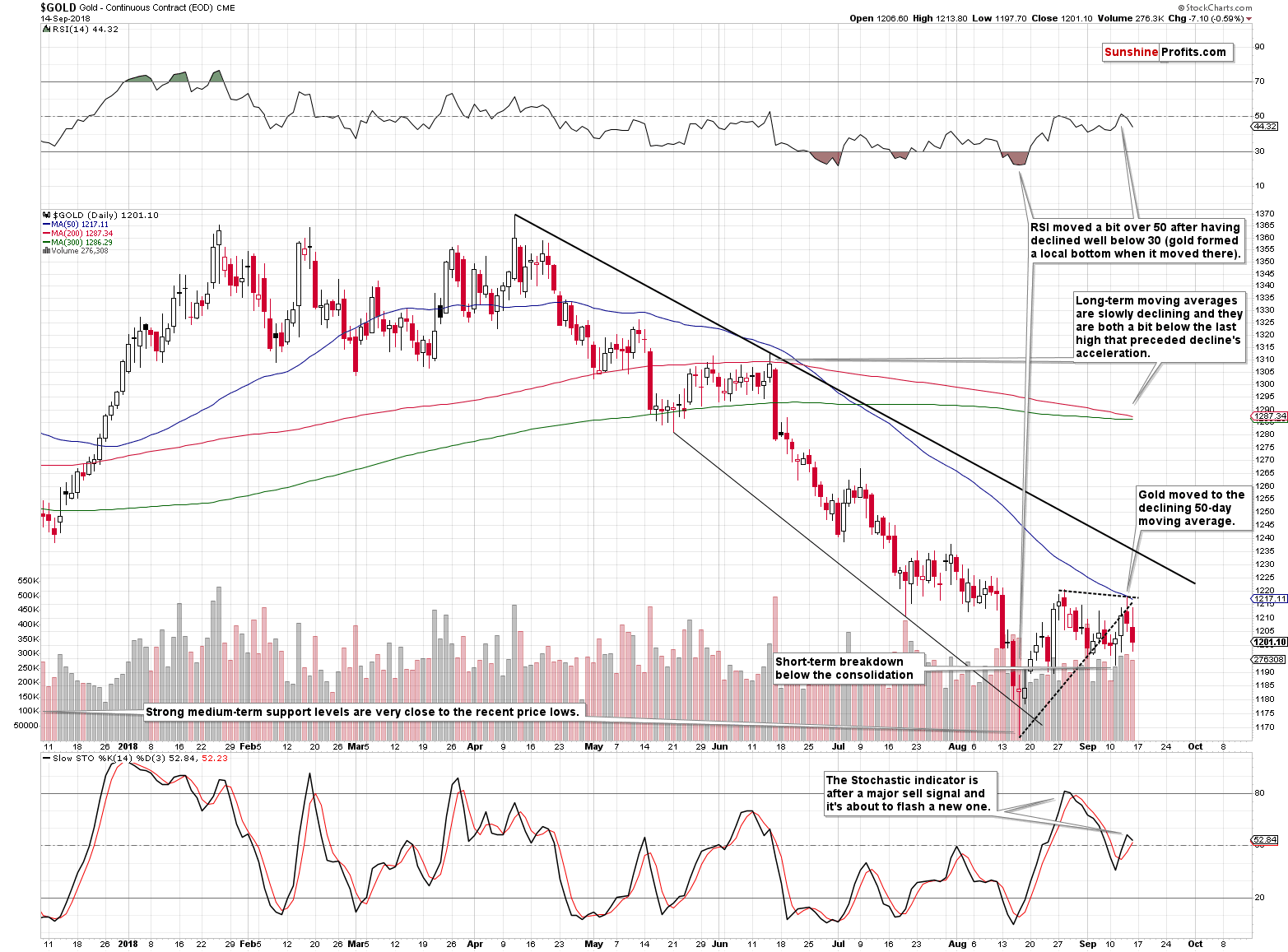 Please re-read everything that we wrote on the previous gold chart. It all applies to the current gold chart as well. Everything. Not just the position of indicators, proximity to the support and resistance lines, situation regarding the consolidation pattern, and the 50- a day moving average. Even the 200-, and 300- a day moving averages (marked with red and green) are slowly declining and are just below the local top after which the decline accelerated.

The more similar a given price pattern is, the stronger the implications are and while it’s usually best to have multiple patterns that are similar to the current one that are followed by the same outcome, this doesn’t seem necessary right now. The similarity is simply so big that even the single case can make a certain outcome very, very likely.

The million (billion?) dollar question is what kind of action followed the still-unknown self-similar pattern in gold in the past.

And… We’ll leave it up to you to find the final piece of this puzzle. The final hint is that it was not more in the past than 10 years ago. The implications are bearish, but in order to find out just how bearish things can be, you’ll have to do some chartdigging. Or perhaps you already know what the first chart represents? Maybe your friends would also enjoy this riddle?