Reluctant to rise – Sterling has been lagging behind its peers when it comes to benefiting from the dollar sell-off. Can GBP/USD find its feet or is it vulnerable to a change of course? Data on both sides of the pond is set to determine the next moves.

This week in GBP/USD: Benefiting from dollar misery

Jobs giveth, jobs taketh away – US Nonfarm Payrolls figures fell well short of already-lowered projections, coming out at only 235,000 positions gained in August. The fact that hiring mostly halted in leisure and travel somewhat eased the pain for the dollar. Nevertheless, Fed tapering if firmly off the table.

The buildup toward the NFP sent the dollar down. The Conference Board's Consumer Confidence measure for August tumbled to 113.8 points, and ADP's private-sector jobs report missed estimates by printing only 374,000 new positions against over 600,000 projected.

While the headline ISM Manufacturing Purchasing Managers report beat estimates with 59.9 points, the employment component fell to 49 – reflecting contraction in hiring. That further lowered the chance of a "Septaper."

On the other side of the pond, a business survey from Lloyds shot to its highest level in around four years – despite reports of shortages. Markit's final Manufacturing PMI was upgraded. Nevertheless, the pound trailed behind the euro and other currencies in gaining ground against the greenback.

Brexit-related shortages on supermarket shelves and also stubbornly high coronavirus cases continued stymieing sterling's advance. While infections have drifted somewhat lower, a clear downtrend has yet to emerge. The US is lagging, with only a deceleration in the number of new cases. The good news from America is that hospitalizations are showing signs of peaking. 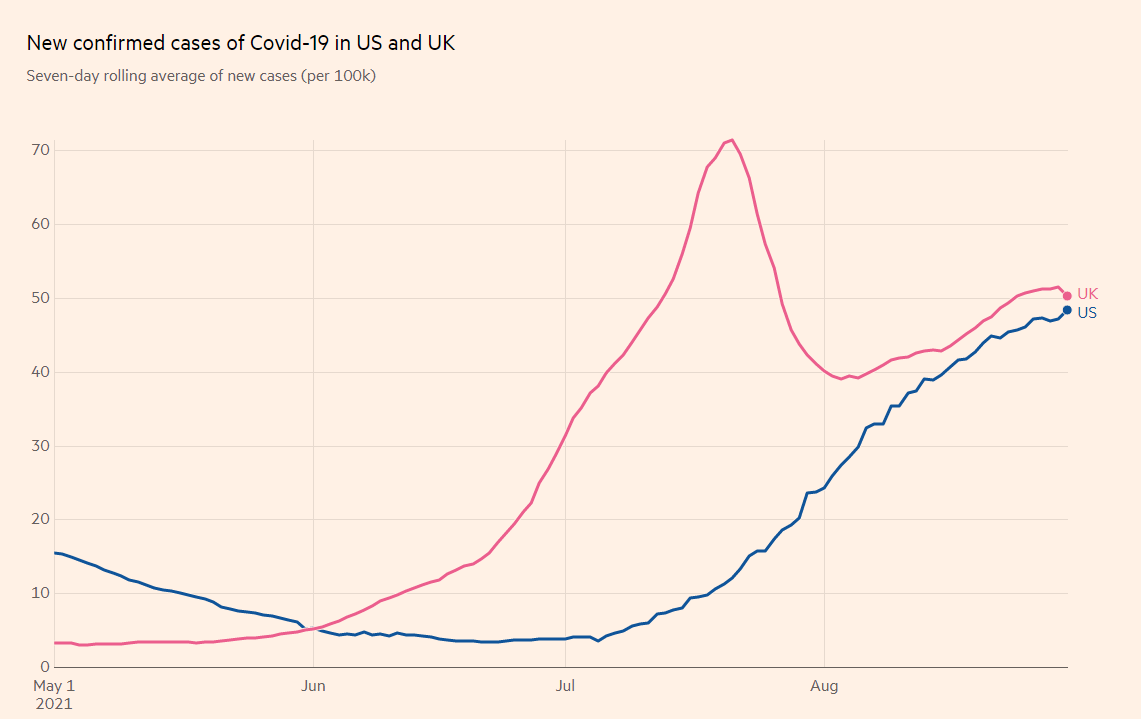 The end of US and UK operations in Afghanistan filled the headlines but did not move markets. Signs of economic weakness in China – the world's second-largest economy – affected Asian stocks and not beyond.

Has "Freedom Day" boosted the economy? Almost all covid-related restrictions were eliminated on July 19, but consumers may have remained shy due to the rapid spread of the Delta covid variant. Gross Domestic Product figures for that month will likely show ongoing expansion, but repeating June's perky 1% growth rate is probably a high bar to cross. The release will also include manufacturing statistics.

Britain's vaccination campaign has nearly ground to a fall halt. One way to revive it – and potentially push infections down – is opening immunization to youngsters aged 12 to 15, as the US and European countries did. Apart from following the daily disease statistics, investors will keep an eye open on jabbing statistics.

Even without adding new age groups, the return from summer vacations could lift this chart off its lows: 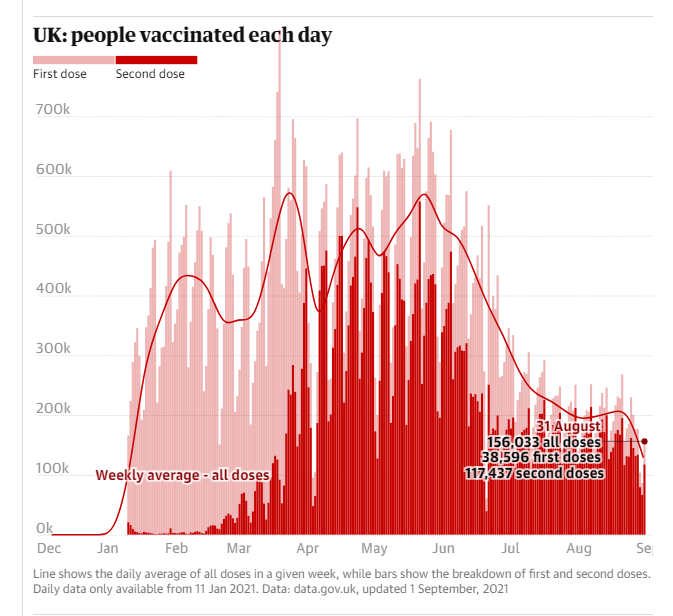 US events: Every data point counts

To taper or not to taper? While the Nonfarm Payrolls report provided some clarity for the Federal Reserve – and US traders have time to digest the data over the long Labor Day weekend – the picture remains blurry. Investors will try to suss out hints from the Fed's Beige Book, the first noteworthy release of the week.

It is a report that includes anecdotal evidence from the bank's regional branches and is compiled two weeks ahead of its meeting. Signs of higher inflation could boost the chance of an imminent reduction of the Fed's $120 billion/month bond-buying scheme already this month. In turn, the dollar could rise. Signs of weakness due to the spread of the virus or any other reason would weigh on the greenback.

Weekly jobless claims could also have an outsized role amid market sensitivity, but perhaps the Producer Price Index – normally a second-tier indicator could steal the show. Factory gate inflation is sometimes seen as a precursor to consumer prices, and in this week's case, it serves as a warm-up to the following week's headline inflation release.

Moreover, PPI statistics are published on Friday as traders wrap up the week, resulting in more significant movements.

As mentioned earlier, there are indications that the US Delta covid wave is peaking. Less economic activity – due to authorities' restrictions or self-imposed – and an increasing pace of vaccinations have helped flatten the curve. At the time of writing, some 900,000 shots go into American arms every day, up over 70% from the bottom.

While the current administration of vaccines is well below the peak, the acceleration is a positive development eyed by investors. 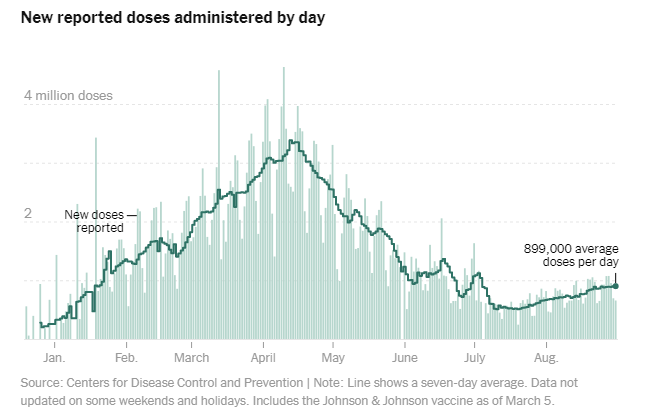 The "Death Cross" pattern triggered the 50-day Simple Moving Average (SMA) crossed below the 200-day SMA, implying further losses. Downside momentum adds to the gloomy picture. On the other hand, the currency pair has crossed above these two SMAs and seems stable.

What does all this mean? Zooming out provides more clarity, as the chart shows that cable has been trading within the wide 1.3570-1.40 range in the past two months, and every move to the edges has resulted in mean-reversion.

Dollar weakness can only go so far – there is room for sterling to correct lower as the dust settles from the NFP. Only strong UK data could push the pound higher, and chances look slim.

The FXStreet Forecast Poll is showing that the recent moves have left experts divided. Short-term forecasts have been upgraded, but there are little changes for longer time horizons. Nevertheless, average targets are coalescing around 1.39, above current trading levels. 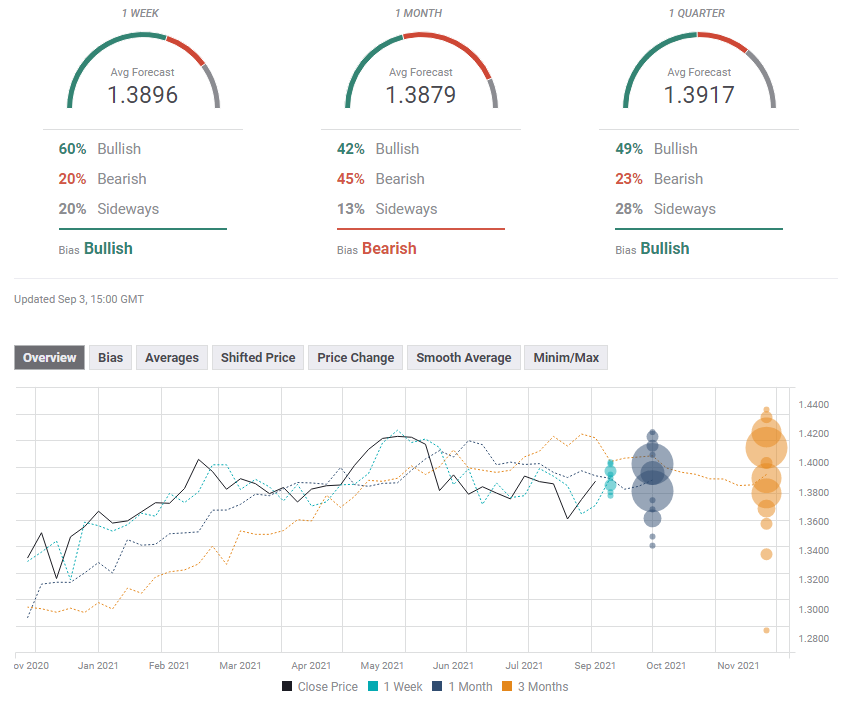 EUR/USD bears stay in control as Asian shares take a plunge. The Fed's hawkishness is reverberating throughout global markets, weighing on risk-sensitive currencies. The US dollar is bid in Asia and risk aversion remains in play.