Volatile, but no breakout – between Brexit's comeback and the lack of a taper tantrum, cable has stuck to the range. The focus is mainly on the Fed's decision and any hints of tightening. Britain's reopening decision and top-tier data such as Britain's jobs report are set to provide action as well.

This week in GBP/USD: Chopping around

Brexit is back: The UK is fully out of the EU as of the beginning of the year, but the lingering issue of the Northern Irish protocol has returned to haunt sterling. Brussels is growing impatient with Britain's delay in implementing the accord and has threatened quota tariffs. Pressure from US President Joe Biden to resolve the issue calmed the mood around the topic and allowed the pound some relief.

Reopening in doubt: Another postponement is also on the cards, this one for "Freedom Day." The last stage of Britain's reopening is still officially due on June 21, but the relentless increase in COVID-19 cases raises the probability of a pushback. Some 91% of new infections are of the Delta variant first identified in India.

The uptrend comes despite an additional effort to reach as many Britons as possible with first and second doses. 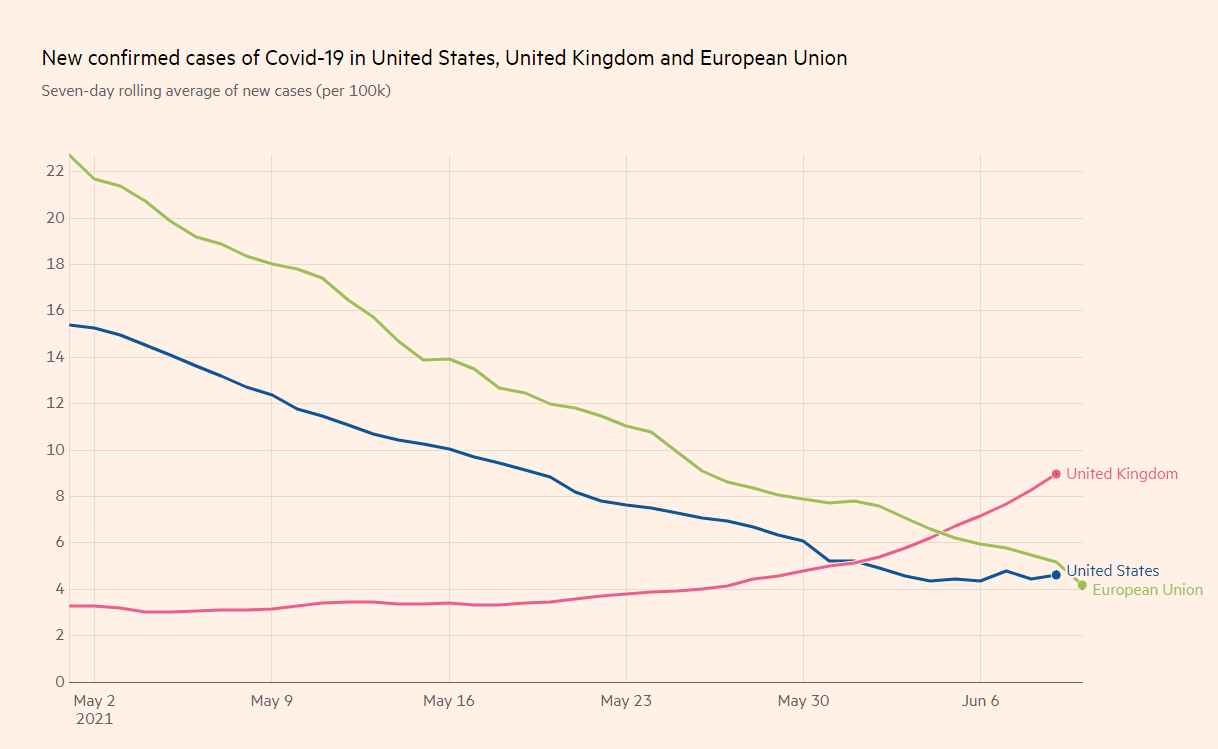 UK tapering? Andy Haldane, the outgoing Chief Economist at the Bank of England, said that the economy is going "gangbusters" and that it is time to withdraw some of the stimuli. Sterling reacted positively but failed to hold onto these gains.

Higher rates: The US dollar received a boost from US Treasury Secretary Janet Yellen, who said that returning to regular interest rates would be a "plus" for the US economy and the Federal Reserve. However, the institution she previously led seems reluctant to act or that is at least what markets think.

Inflation: The US Consumer Price Index (CPI) shot up to 5% YoY, a level that was last seen in 2008, while Core CPI hit 3.8%, both beating estimates. However, the greenback's knee-jerk reaction proved short-lived and it remained pressured. Bond markets seem to dismiss the possibility of an early rate hike – 10-year Treasury yields slid under 1.50%.

All in all, it has been another week of an "ugly contest" between the dollar and the pound.

It seems like a matter of when rather than if – the UK government will likely decide to postpone a return to normal by at least two weeks. Any delay beyond early July would be adverse to the pound, while a surprising decision to stick with June 21 would be positive. An announcement is likely early in the week. 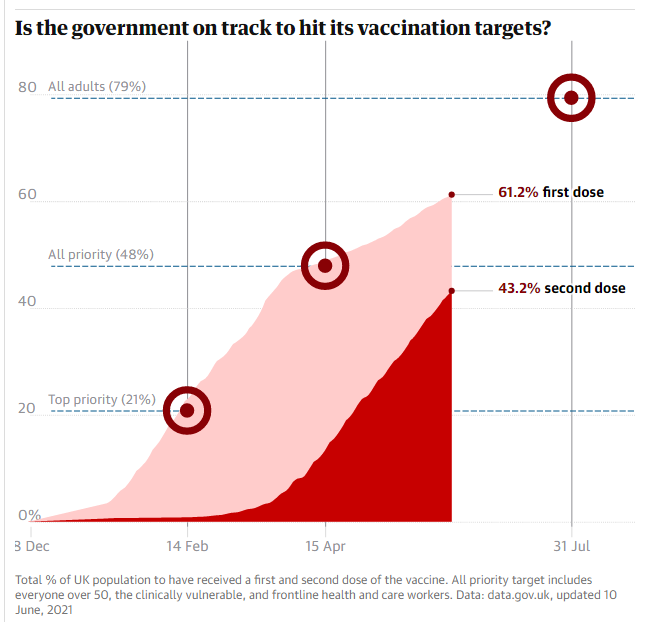 The British economic calendar also promises action. The Unemployment Rate has likely remained depressed below 5% in April, while the more recent Claimant Count Change will probably show another decrease in May. Loosening restrictions boosted the labor market.

Has the reopening pushed prices higher? So far, headline CPI stayed under the BOE's 2% target, and an increase above that level would not be a shocker. However, the bar remains high for a rate hike based on accelerating inflation.

Last but not least, Friday's retail sales statistics for May are set to show substantial leaps in annual figures due to the  "base effect" – Britain's lockdown last year. However, the monthly figures will also likely show robust spending.

Overall, UK data is set to be a positive factor for the pound. 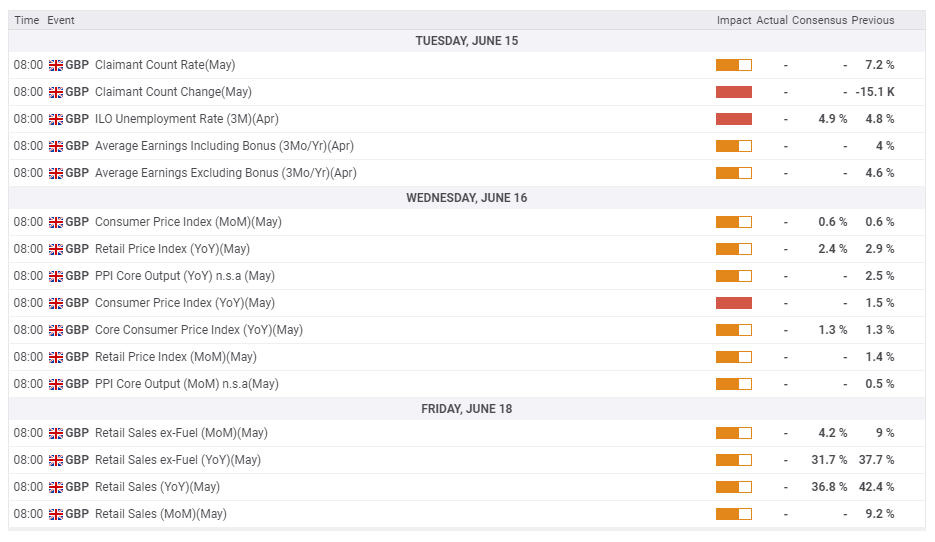 US events: All eyes on the Fed

To taper or not to taper? That is the question for the Federal Reserve in its June meeting – or at least a mere discussion about having a conversation about such a reduction in bond-buying would be positive for the dollar. Pushing back against reducing the bank's $120 billion/month dollar printing would be greenback-negative.

The recent rise of headline CPI inflation to 5%, signs of price pressures in surveys, and a minor shift from several officials point to a hint toward tapering later this year. On the other hand, Fed Chair Jerome Powell and his colleagues could continue insisting that inflation is transitory and that employment is still lagging. Some 7.6 million Americans have yet to return to their pre-pandemic jobs.

The bank also released updated forecasts in this meeting – aka the "dot plot." Any upward change in inflation expectations and growth prospects would be positive and would downgrade the unemployment outlook. Yet the interest rate projections will likely garner the most interest. If the minority supporting a hike in 2022 increases, the dollar could run higher.

Apart from the statement and the dots, Powell's press conference will be critical in shaping the response. Leaning toward caution would weigh on the dollar, while cheering the reopening could boost it.

At the time of writing, markets expect the Fed to refrain from rocking the boat at this juncture but rather begin moving in late August at the Jackson Hole Symposium.

Apart from the Fed's decision on Wednesday, markets will be eyeing Retail Sales figures for May. After smashing estimates in March and disappointing in April, modest changes are on the cards for last month. Despite estimates for small changes and the wait toward the Fed meeting, any surprise in the data – which tends to be volatile – could rattle investors. 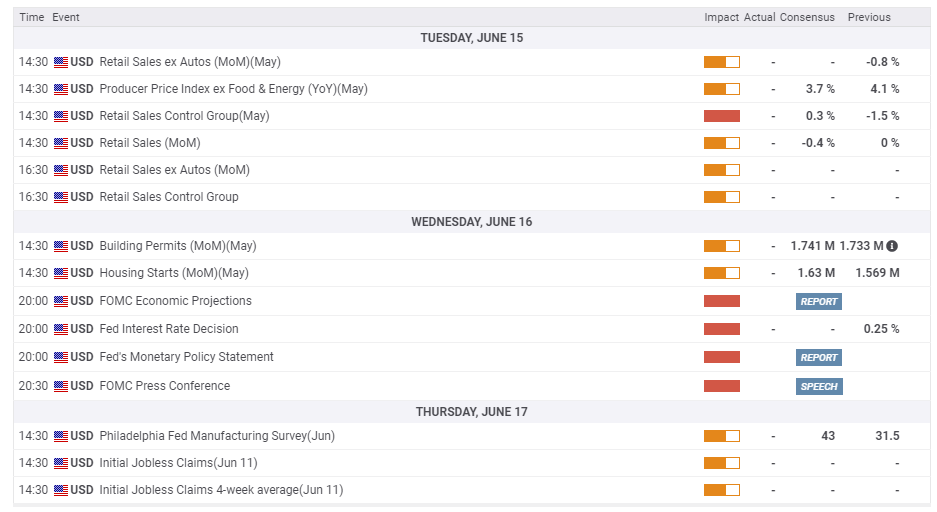 Progress on infrastructure will likely be on hold while President Joe Biden is on tour in Europe, but any progress would be welcome by the markets. After the latest round of talks between the White House and a group of Republicans failed, another bipartisan offer emerged, but it is yet to receive the blessing of senior officials.

America's vaccination pace has been slowing down, but the federal government is keen on getting as many Americans jabbed as possible until July 4. Cutting the downtrend in this graph short would be welcome. 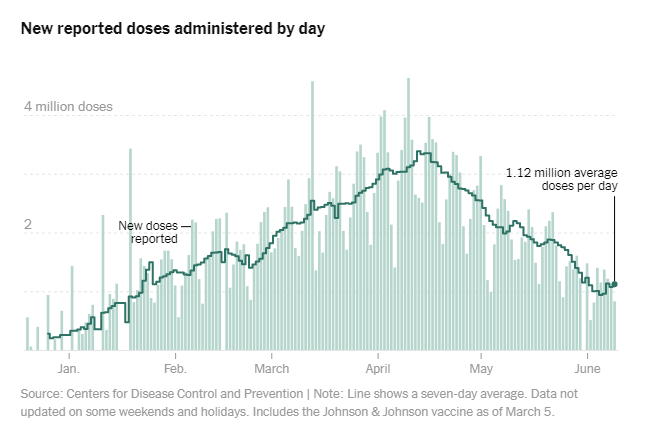 Pound/dollar continues benefiting from upside momentum on the daily chart, but it has somewhat waned. Looking at the simple moving averages, cable remains well above the 50, 100 and 200 SMAs. All in all, the past month's range trading has left bulls in the lead.

Some support is at 1.4110, which undergirded in early June. Despite a breach, 1.4080 remains significant after cushioning cable twice in recent weeks. It is followed by 1.4080 and 1.4010, the latter being a clear separator of ranges.

Powell will likely persist – holding the line against any early tightening and putting pressure on the Fed. Assuming the current Brexit friction does not further escalate, the pound has room to rise. A delay in "Freedom Day" is mostly priced in, and UK data is set to be positive.

The FXStreet Forecast Poll shows that the recent retreat of GBP/USD toward 1.41 will likely prevail for another week before cable gradually recovered. Average targets are little changed in comparison to last week, reflecting the currency pair's range trading. 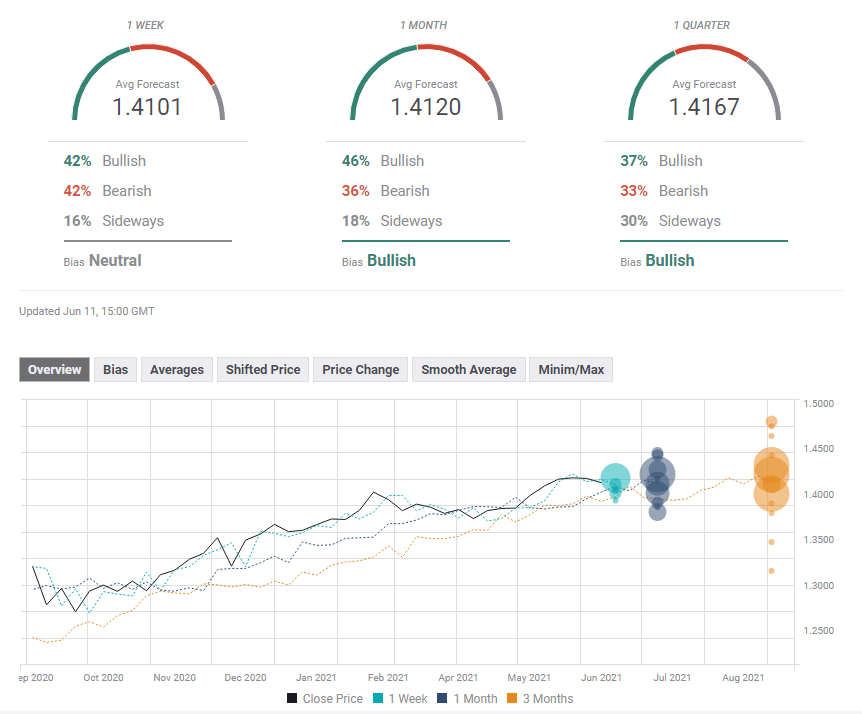