Will the Fed be forced to tighten its policy prematurely? The raging debate has been shaking and eventually benefiting the dollar, especially after robust inflation figures, with more volatility expected in response to the bank's minutes. Sterling has received support from the UK reopening and GDP, with a long list of figures now due.

Inflation has reared its ugly head – that seems to be the view in financial markets, which have reacted forcefully to the surge of the Consumer Price Index to 4.2% yearly and Core CPI to 3% YoY. Will the Federal Reserve reduce its monthly bond buys sooner rather than later?

That is unclear, as some of the rising prices are related to the rapid US reopening and surging costs of used cars. Apart from Dallas Fed President Robert Kaplan, a long list of officials from the bank maintained that rising prices are transitory, helping cool the dollar's gains.

America is returning to normal at a rapid pace as COVID-19 cases drop. Partly as a reason to incentivize those who hesitate to take up vaccines, the US Center for Disease Control (CDC) announced that fully immunized people might abandon their face masks.

In the UK, Prime Minister Boris Johnson announced a new phase of easing coming on May 17, yet concerns about the reopening have emerged as the Indian strain of the virus is spreading rapidly. The government is considering accelerating the campaign in areas where the variant is prevalent. Nevertheless, the broad picture remains rosy. 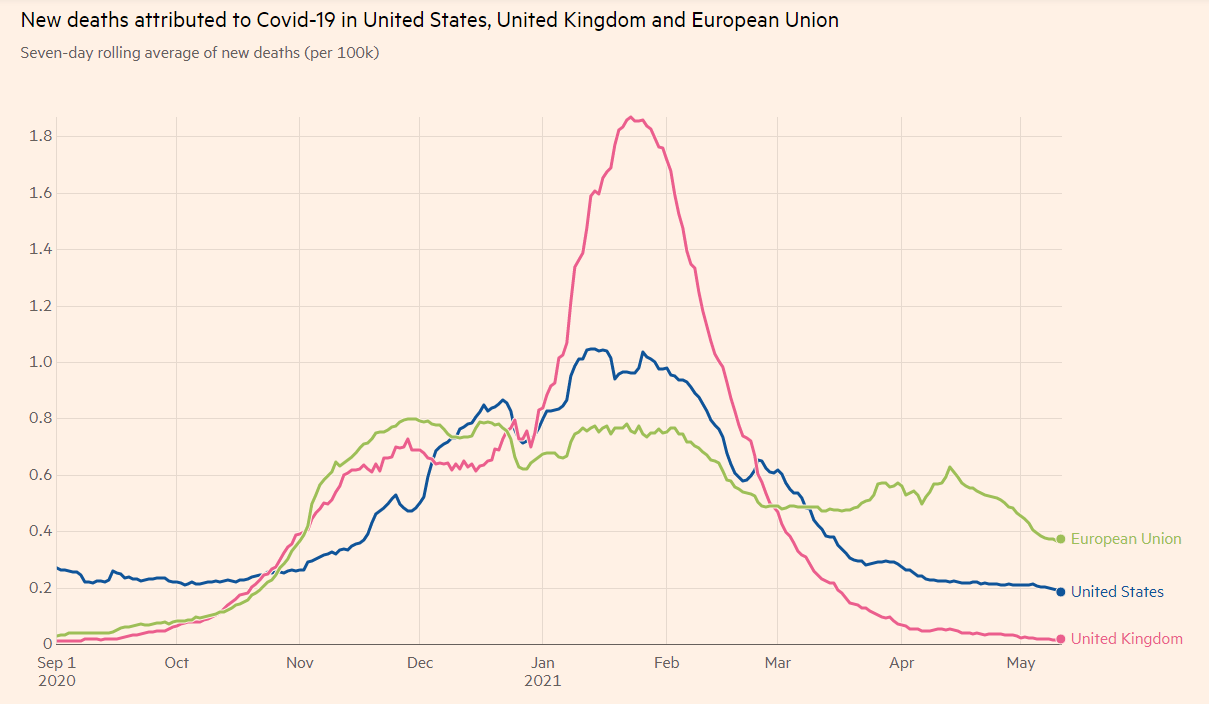 Sterling also received a boost from the minor beat in Gross Domestic Product figures for the first quarter, which showed the UK squeezed by only 1.5%. The pound also cheered the results of Scotland's elections. The pro-independence Scottish National Party (SNP) fell short of an absolute majority, an outcome that could partially defuse political tensions.

Overall, the pound had its reasons to rise, but the dollar's moves overwhelmed it.

Britain is benefiting from reaching over half of its population with at least one jab, and its efforts to complete the second dose are picking up speed. If the pace further accelerates in response to the Indian variant, markets would cheer. It would put the UK closer to herd immunity. 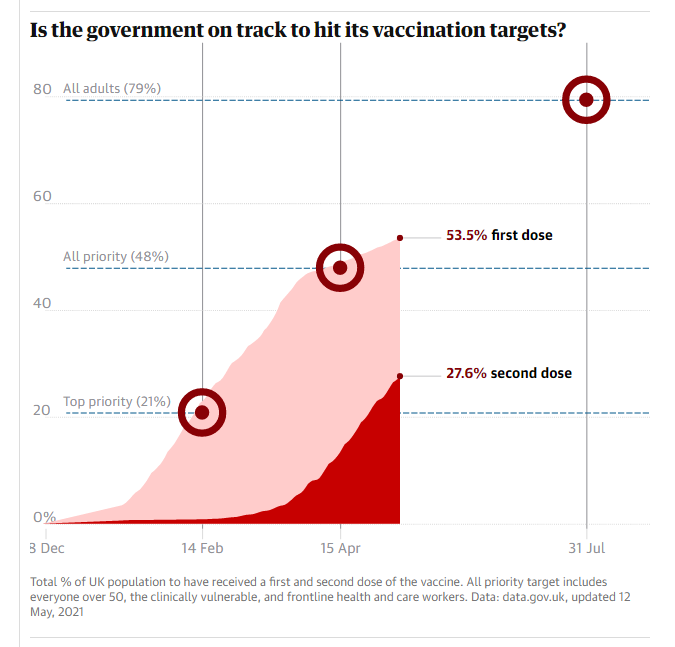 Brexit refuses to die. While the row over fish in Jersey seems to have calmed down, the fate of the cross-border sales of services remains in the air. Negotiations continue but remain overshadowed by the virus.

The economic calendar is set to keep sterling traders busy. The jobs report for March will likely show a relatively benign unemployment rate close to February's 4.9% level. Economists expect wage growth to remain above an annual pace of 4%, while the Claimant Count Change for April could fall amid the reopening, supporting sterling.

Is inflation raising its ugly head also in the UK? While consumer prices have likely advanced in April, an increase above the Bank of England's 2% level will have to wait. That could weigh on the pound, as it would delay any rate hike.

The busiest day is on Friday, kicking off with Retail Sales statistics. After a leap of 5.4% in March, a more moderate yet healthy advance of 1.5% is projected for April, while YoY changes remain skewed due to the pandemic.

Markit's preliminary Purchasing Managers' Index (PMI) report for May could show ongoing robust growth after topping 60 points in March. That was far above the 50-point threshold that separates expansion from contraction. 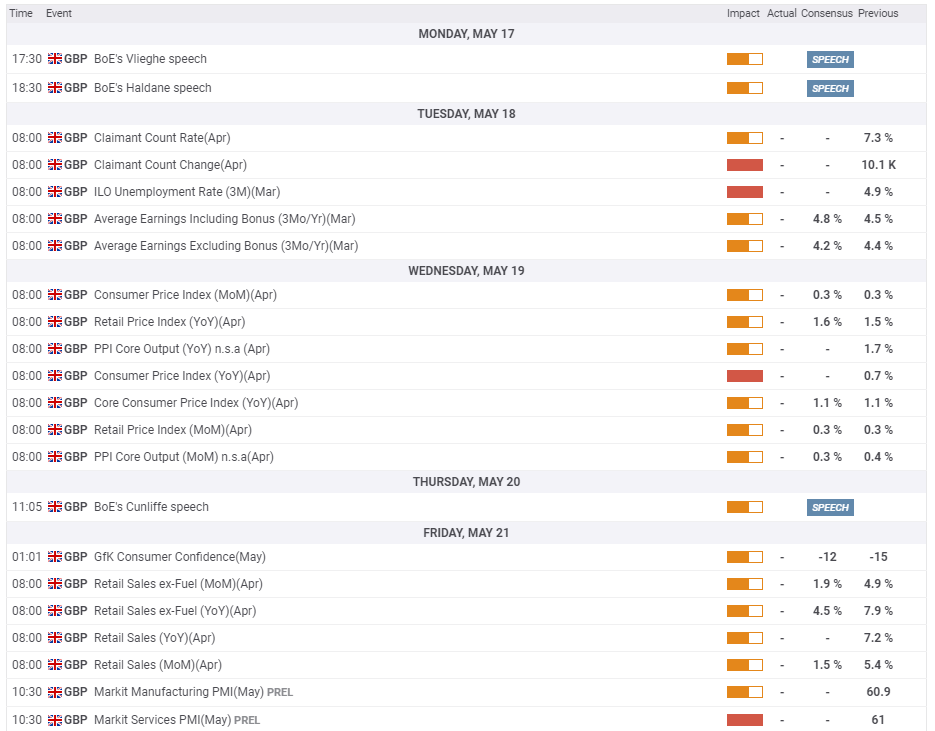 US events: Fed minutes in focus

Will the new efforts accelerate vaccine take-up? Ohio is giving away a million dollars to five lucky people who get the jab, ride-hailing companies offer free trips to and from immunization centers, and dropping of the mask mandate by the CDC should also trigger a boost 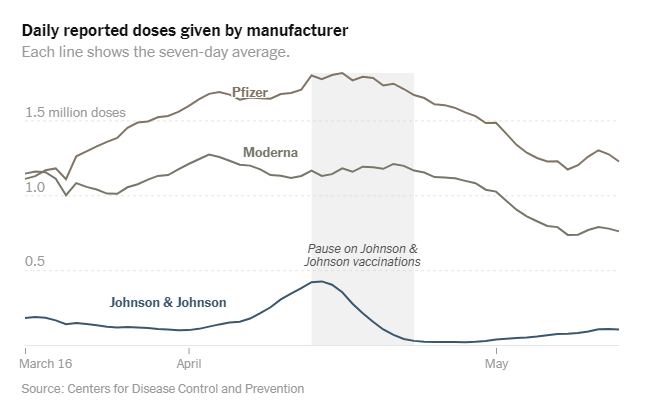 The White House and Congress continue debating President Joe Biden's infrastructure spending and tax ideas, but progress is unlikely before the July 4 deadline. If corporate taxes are substantially hiked, it could dampen sentiment, yet that is highly unlikely.

The highlight of the economic calendar is the publication of the Federal Reserve's meeting minutes from its April gathering. Back then, the bank rejected speculation of imminent tapering of its bond-buying scheme and dismissed inflation as transitory. However, there are other voices within the Fed, but how strong are their views?

Weekly jobless claims will likely continue their downward trajectory but housing figures are set to show that the sector is steaming hot.

As the daily chart shows, pound/dollar is trending higher –  setting higher highs and higher lows. The currency pair benefits from upside momentum and trades above the 50-day, 100-day and 200-day simple moving averages. The recent slide from highs has sent the Relative Strength Index (RSI) away from 70 – thus far from overbought conditions.

Critical support is at 1.40, which is a psychological barrier and also separated ranges. Further down, 1.3910 held cable down in April and now serves as support. It is followed by 1.38 and 1.3670.

A dose of tranquility from the Federal Reserve and potentially upbeat UK figures – in addition to an acceleration in inoculations – could send GBP/USD higher.

The FXStreet Forecast Poll shows that experts are divided on the next moves of GBP/USD. They see modest rises in the short term, a substantial fall later on and finally a recovery. 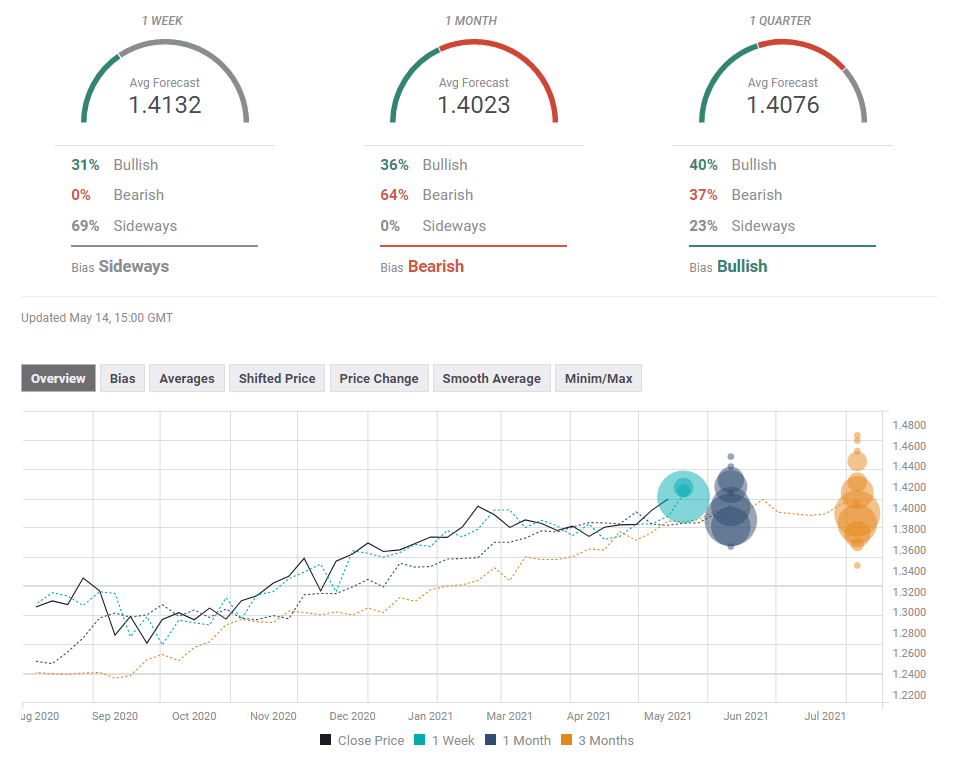