The sterling-yen cross traded half a percent lower during the London session on Thursday, trying to defy the JPY strength.

The USD/JPY pair fell sharply after yesterday’s Powell presser, dropping to 3-month lows, dragging all the JPY crosses lower. November became the pair's worst month in 14 years, with a decline of roughly 7%.

On the other hand, GBP/USD rose notably, printing 3-month highs and testing the 200-day moving average at 1.2160, negating the massive decline in USD/JPY. As a result, the GBP/JPY cross has traded only slightly lower today.

According to Nationwide's most recent study, property values declined in November as a result of the government's poor mini-budget.

The latest Nationwide House Price Index shows that prices dropped 1.4% month over month in November, which is the largest drop since June 2020. Their decline in October was 0.9%.

In the UK, home prices increase last month was 4.4% on an annual basis, a significant decrease from the 7.2% gain in October. In the UK, the average cost of a home is currently £263,788.

Robert Gardner, the chief economist at Nationwide, said: "The fallout from the mini-budget continued to impact the market.

"While financial market conditions have stabilized, interest rates for new mortgages remain elevated, and the market has lost a significant degree of momentum. Housing affordability for potential buyers and home movers has become much more stretched at a time when household finances are already under pressure from high inflation."

Sentiment also improved slightly as some COVID restrictions have already been loosened in two significant Chinese cities due to mounting public discontent with the government's "zero-COVID" policy.

Asahi Noguchi of the Bank of Japan stated that in order to reach the proper level of inflation in a steady way, salaries must increase more quickly than the rate of inflation.

Therefore, the BoJ must continue its monetary easing and keep interest rates low in the current climate since the accomplishment of its 2% inflation objective is still in doubt.

Additionally, Japan's Manufacturing PMI decreased from 50.7 in October to 49.0 in November.

The US Bureau of Economic Analysis will present statistics for the October Personal Consumption Expenditures (PCE) Price Index, the Fed's favored inflation indicator, later in the day. The US economic agenda will also include the November ISM Manufacturing report.

A nice triangle pattern has been formed in the daily chart, with the support of the lower trend line already tested today. If that level near 165 fails to hold, we might see another leg lower toward the 200-day average at 162.80.

On the upside, the resistance stands near 167.50 and if broken to the upside, further gains toward 170 seem likely. 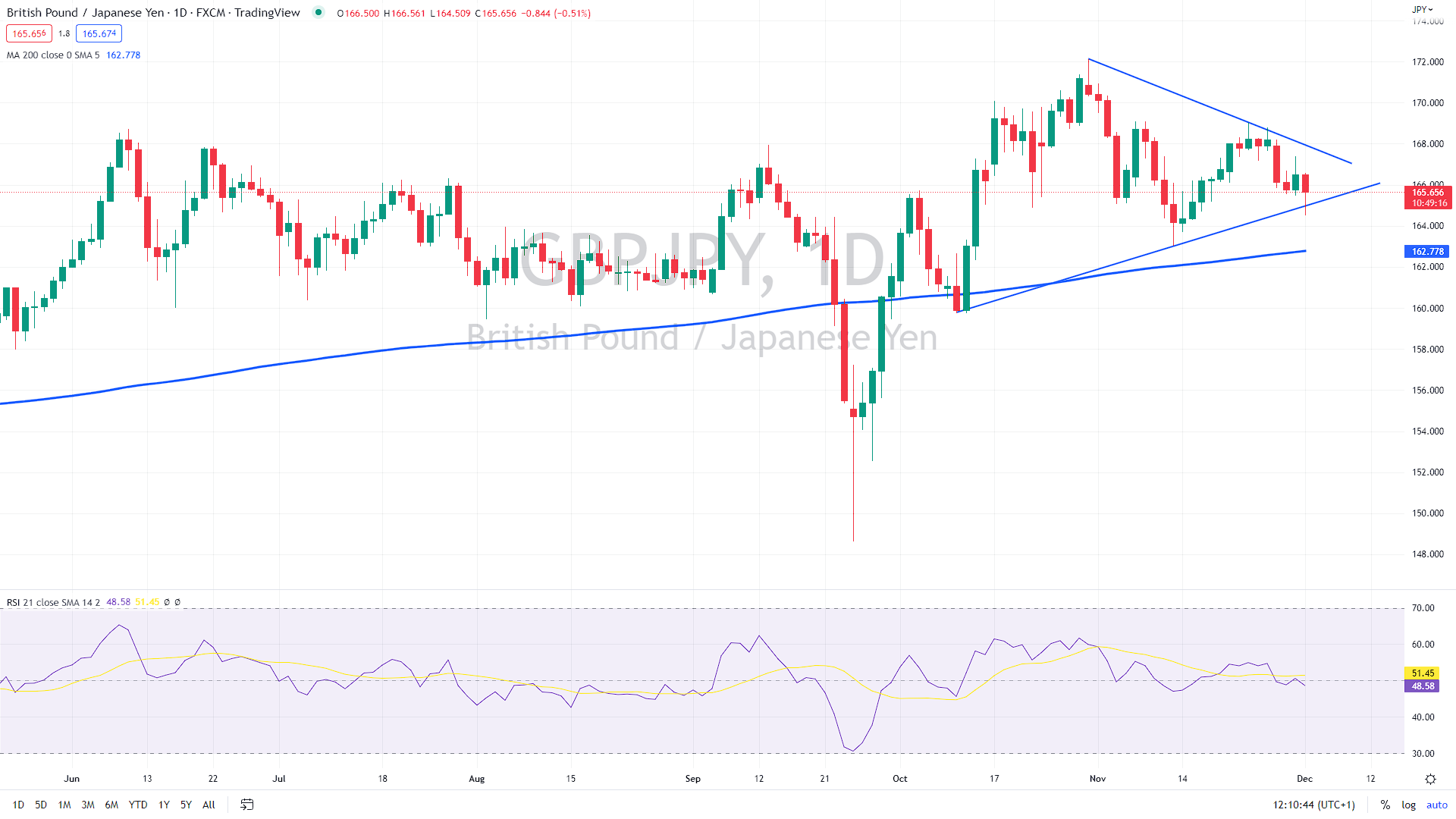 Gold price is holding steady above the $1,900 mark, as sellers take a breather after a sharp pullback from ten-month highs of $1,960. A sense of calm prevails in Fridya’s tradiung so far, as investors stay on the sidelines and assess the latest central banks’ policy decisions and its market impact going forward.

Uniswap price shows a steady uptrend with higher highs and higher lows. While this outlook alone might instill confidence in a layman investor, a closer look reveals weakness.

How impactful has the US jobs report been on gold’s valuation? In this article, we present results from a study in which we analyzed the XAUUSD pair's reaction to the previous 30 NFP prints.