The Pound and Euro posted respective two- and three-day lows against the Dollar as anxieties about Brexit took hold, although magnitude of movement has been limited so far. Both currencies posted 10-day lows versus the Yen, though fared better against the dollar bloc currencies with global stock markets and commodity markets seeing cautious trading after recent strong gains. The Pound itself underperformed relative to the Euro, which saw EURGBP lift to a 0.8958 high, which reversed most of the decline seen yesterday. Neither the UK or EU has blinked as trade negotiations go right down to the wire, while there are reports that Brussels bureaucrats are fretting there won’t be sufficient time to ratify a deal before the January-1 deadline and news that the EU is drawing up emergency no-deal plans today. An EU diplomatic source cited by the Sun tabloid said that the two sides are “nowhere near” an agreement over fishing rights and said that they had “gone backwards” on agreeing common standards, adding that talks can only continue to mid next week before “time will get the better of us.” While the drama is imparting downside bias on the Pound and Euro, both currencies, and especially Sterling, would be considerably lower if markets were committed to pricing in a no deal scenario. Bigger picture market participants are preferring to wait on concrete developments, though near-term speculators are starting to prod the Pound lower now. Expectations are that win-win will prevail rather than lose-lose, and that an accord will be reached. Will it be this weekend, will it be next week? – no one truly knows but it is in both parties’ interests to get to the “handshake”. 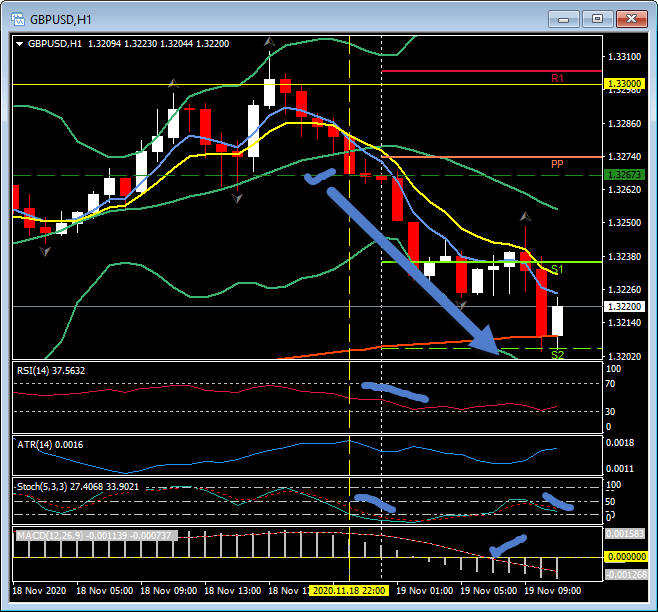 Cable continues to find support at 1.3200 and struggle at 1.3300, with the last move triggering lower under the 20-hour moving average yesterday at 1.3267. It has continued to move lower today below S2 before finding support at the 200-hour moving average at 1.3207, so far today. The MACD Signal line breached the 0 line earlier and the fast moving averages are aligned lower, RSI is 38 and weak and the Stochastics are still moving lower and not yet into the OS zone. The 60-pip move lower represents 3.5 times the H1 ATR. The Daily ATR is currently 117 pips.

Join me LIVE on our Facebook Groups for Live comment and analysis of the US Initial and Continuing Jobless Claims data, the Philly Fed Index and the Canadian ADP Non-Farm Employment Change. All due at 13:30 GMT.