The commodity currencies outperformed some more, as did many developing-world currencies amid a backdrop of rising stock and commodity markets. Equity markets are amid day two of a rally pinned on tentative signs that the global coronavirus infection and mortality rates might be near to peaking. The Fed’s decision to finance new “payroll protection” loans has also bolstered the US economic response plans. AUDUSD has rallied 1.7% in printing a one-week high at 0.6192, while AUDJPY has rallied by 1.4% in making a high at 67.38. The Aussie dollar is now up 3% from last Friday’s closing levels. The Kiwi and Canadian dollars are also up. USDCAD has dropped to an eight-day low at 1.4011. The Dollar, Yen and, to a lesser degree, the Swiss Franc, have continued to underperform most other currencies. The narrow trade-weighted USDIndex has declined by 0.6% in pegging a five-day low at 100.79, while EURUSD concurrently lifted by 0.7% in making a five-day high, at 1.0876. The pair is up by just over 1% from its Monday lows. The combination of risk-on positioning in markets and the Fed’s aggressive dollar liquidity provisions, which forms part of a crisis-era level of monetary accommodation, have been bearish tonic for the Dollar. Dollar underperformance saw USDJPY dip back under 109.00, though the Yen itself trader softer against most other currencies as its safe-haven premium is whittled down. 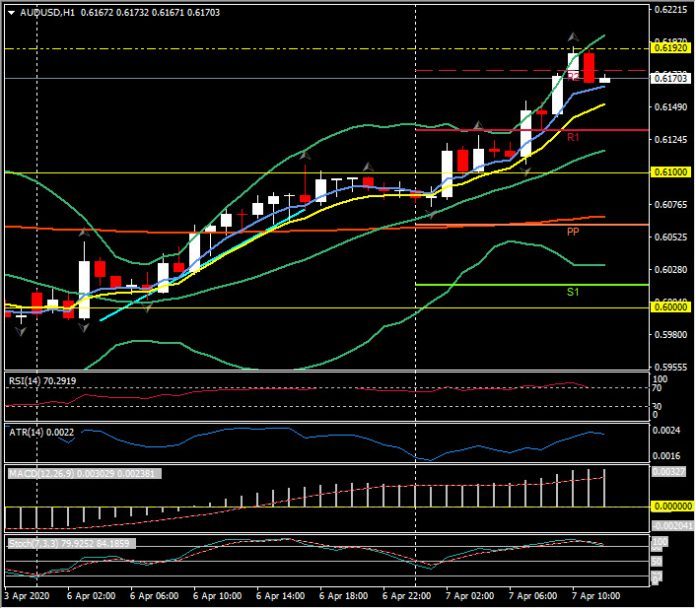 Sterling dipped on the news that PM Johnson was moved to ICU and had received oxygen, although Downing Street stated that he was still conscience and that Foreign Secretary Dominic Raab will lead the UK government as long as Johnson is incapacitated. From lows of 1.2162 earlier, a weaker USD, has Cable rally over 170 pips to 1.2335. Next resistance is R2 and the upper Bollinger band around 1.2375, 1.2400 and then R3 at 1.2420. Support sits at 1.2300 and the Daily Pivot Point, a 50.0 Fibonacci level and 200hr moving average at 1.2250. 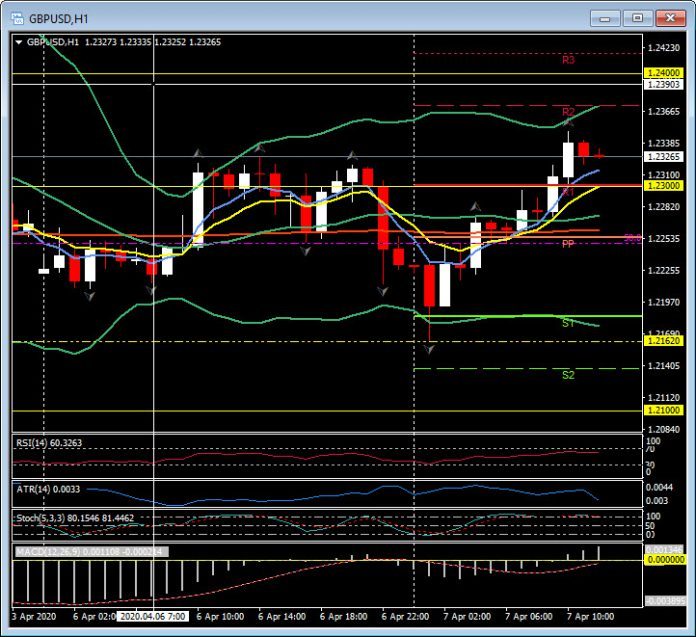 The massive $45 slump Gold prices (XAU/USD) on Friday created a bearish pennant formation on the hourly chart, indicating that the spot remains exposed to further downside risks in the near-term.