The FTSE rally has slipped in the Friday session. Currently, the index is trading at 7,334, down 0.53% on the day. On the release front, today’s key events are the May retail sales reports. Core retail sales are projected to climb to 0.5%, after a weak gain of 0.1% a month earlier. Retail sales are expected to rebound to 0.7%, after a reading of -0.2% in April. The week winds up with the UoM Consumer Sentiment report, which is expected to fall to 98.1, after an outstanding reading of 102.4 in the previous release.

Dismal news from Broadcom, the giant Singapore chipmaker, has sent global equities lower on Friday. Broadcom has forecast a hit of some $2 billion to revenue, another casualty in the bitter trade war between the U.S. and China. The negative news has hurt technology stocks and the FTSE is in red territory. As well, Chinese industrial output was unexpectedly soft, dropping to its lowest level since 2002. The indicator gained 5.0% in May on an annualized basis, well off the forecast of 5.5%.

Will U.S. consumer spending data meet the high expectations? Inflation numbers for May were soft, but the markets are counting on better news from consumer spending. Retail sales and core retail sales are expected to rebound in May, and these numbers could play a crucial role in the Federal Reserve’s forward guidance for rates. The markets are prepared for rate cuts in the second half of the year. The CME Group has set the odds of a July cut at 62% and another cut in September at 55%. Lower interest rates make the U.S. dollar less attractive to investors, which could be good news for equities. 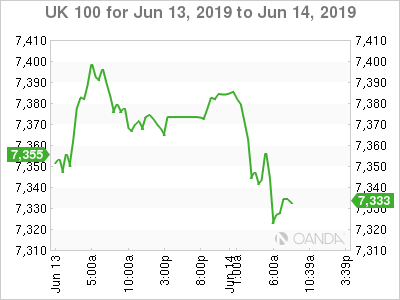