The FTSE 100 index held steady on Thursday helped by mining companies like BHP, Antofagasta, and Glencore. These shares rebounded as the prices of commodities rocketed to multi-year highs. Zinc jumped to the highest level since 2007 while aluminium rose to the highest level since 2008. Iron ore and coal also jumped. This price action is mostly because of the rising demand for metals and the ongoing shipping delays.

Still, there are worries that this commodity supercycle will lead to higher inflation. Meanwhile, the index rose even as more energy companies in the UK went out of business because of the rising wholesale gas prices. At the same time, Jim Ratcliffe, the founder of INEOS said that many British manufacturers will be forced to shut down operations as energy prices rebound. The top laggards in the FTSE 100 were Admiral Group, Kingfisher, Barratt Developments, and Taylor Wimpey.

The Australian dollar rose against the US dollar even after the country published weak jobs numbers. According to the statistics agency, the country lost more than 138k jobs in September after it lost more than 146k in the previous month. The participation rate declined to 64.5% while the unemployment rate rose to 4.6%. The Aussie jumped because of its role as a proxy for commodity prices. It also rose because analysts expect that the country’s economy will soon rebound as the government implements reopening plans. The Morrison government expects to reopen its borders to vaccinated travellers in the next few months.

German stocks rose even after Germany downgraded its growth forecast. The company’s top economic research institutes lowered their growth forecast from 3.7% to 2.4%, blaming supply bottlenecks and the slower recovery of the services sector. The estimate was relatively more pessimistic than what the IMF published earlier this week. Elsewhere, in China, factory-gate prices jumped to 10% in September, the highest level in more than a decade. This increase will likely be pushed to global consumers since China is the biggest exporter. In Turkey, the lira crashed to an all-time low after the country’s president removed two deputy governors.

The XAUUSD pair rose to the highest level since September 15 as the US dollar retreated. The currency fell even after the strong inflation data and after the Fed minutes hinted that tapering would start soon. On the four-hour chart, the pair rose above the key resistance level at 1,777. This was the neckline of the inverted head and shoulders pattern. It also moved above the 25-day and 50-day moving averages and is at the 23.6% Fibonacci retracement level. Therefore, the pair will likely keep rising as bulls target the important resistance at 1,834. 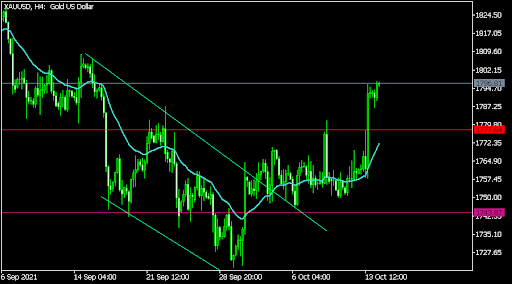 The EURUSD made a major bullish breakout. The pair rose to a high of 1.1620, which was the highest level since October 5. On the hourly chart, the pair moved above the important resistance at 1.1585, which was along the upper side of the double-top pattern. It also rose above the 25-day moving average while the MACD has been rising. Therefore, the path of the least resistance for the pair is to the upside. 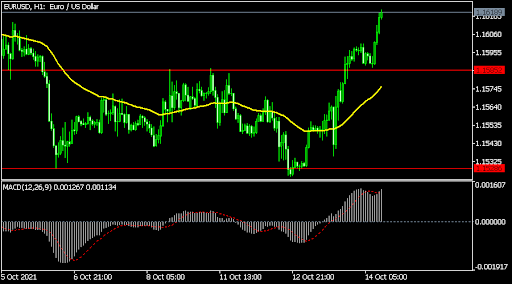 The ETHUSD pair rose to a key resistance level as interest in cryptocurrencies rose. The pair rose to a high of 3,640, which was the highest level this month. It has formed a double-top pattern whose chin is at 3,375. The bullish trend is being supported by the 25-day and 50-day moving averages. Therefore, a bullish breakout will be confirmed if the price manages to move above the key resistance at 3,675. 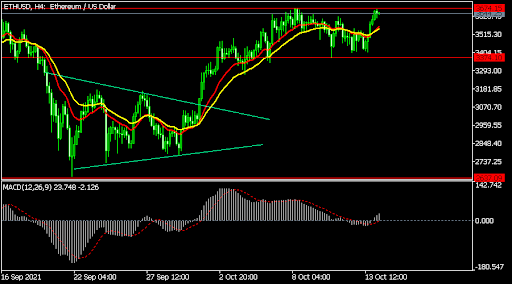