There's a before and an after Brexit and not just for the UK. At the beginning of the year markets were focused on the FED and the four rate hikes anticipated during the December 2015 meeting. Six month afterwards and with just one rate hike delivered, the world scenario has changed, first, because deflationary pressures refuse to give up and secondly, because of the UK's decision to leave the EU.

Majors Central Banks have engaged in massive easing policies. European Central Bank President Mario Draghi on March announced the latest package of stimulus measures, cutting rates further into negative territory to -0.4% and increasing the monthly volume of bond purchases to €80 billion from €60 billion, which will include some bonds issued by non-financial companies as well as higher limits on bonds issued by European institutions and development banks. To ease the impact on banks, the ECB added low-cost, short-term loans and longer-term liquidity at negative interest rates to boost investment spending. But the threat of deflation dangle over the region as a Damocles' sword. In February, the European Commission slashed its inflation forecast to 0.5% for this year; in May, they cut it back down to 0.2% for this 2016.

The US Federal Reserve is the only big central bank not applying easing but has had to refrain from rising rates, firstly announcing that those four will become two and now taking an on-hold stance, with market's expectations pointing for a hike not before the second half of 2017.

Economic growth, however, has started the year on a high note. According to the Eurostat, the official data agency for the European Union, GDP growth in the first quarter was 0.6% after being trimmed to 0.5% in an earlier estimate, pushing the annual growth rate up from the previous estimate of 1.6%, the fastest pace since Q1 2015. Preliminary data for the EU growth for the Q2, however, is expected around 0.3%, below Q4 2015 of 0.4%, damaged by the UK's vote to leave the EU. Most analysts estimate that the growth in the Union will be trimmed by 0.5 percentage points during the upcoming 2017 and 2018.

So, no growth, deflationary pressures and central bank full armor already launched: What can the EU do now? Not much actually. The lack of a deeper integration, beyond commercial agreements and a common currency, will keep on jeopardizing the integrity of the European Union. Not to mention a fiscal union that has been discussed for years already, a discussion still in a very early stage. As long as the strongest nations have to continuously come to the rescue of the weakest ones, the fundamental competitiveness problems of each country will remain at the forefront of the lack of success.

At this point, rather than wondering with the EU will come out of its crisis, the world is asking who will be the next to fall. Italy leads the scoreboard with its banking issues but Greece, who lately has been silent, is still a ticking bomb.

In this scenario, what will happen with the EUR/USD?

The EUR/USD pair has been trading mostly within 1.0800 and 1.1460, measly 600 pips, since early 2015. A year and a half without a certain directional trend. There were a couple of spikes above the high and dips below the low of that range, but were quickly reverted, proving unsustainable. It seems that Mario Draghi is not the only one who does not know what to do with the common currency. 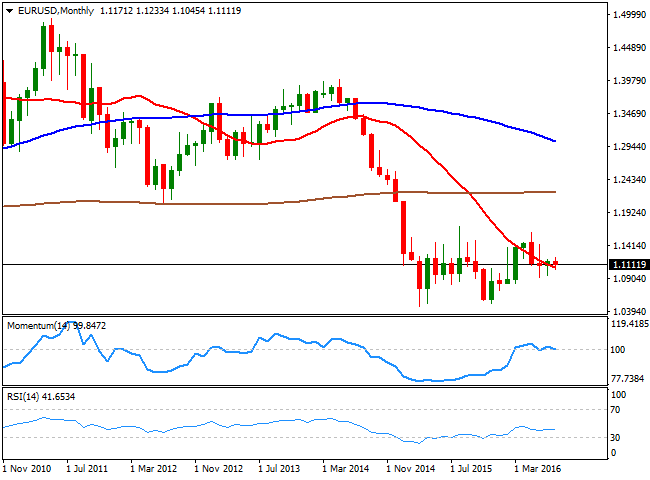 Long-term technical readings favor the downside and, according to the monthly chart seen above, there's scope for a test of the 1.0460 low set on March 2015. The pair has been developing far below its 100 and 200 SMAs, whilst the 20 SMA leads the way lower, containing rallies and maintaining a sharp bearish slope. In the same chart, however, technical indicators reflect the ongoing absence of trend, heading nowhere around their mid-lines. 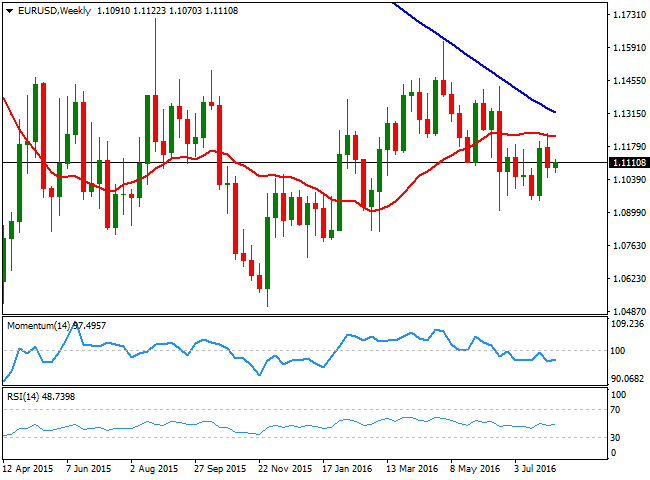 Weekly basis the range is even more clear, but also the downward potential of the pair, as approaches to the 100 SMA have attracted selling interest, with the indicator accelerating its decline during the last months. The Momentum and the RSI indicators lack directional strength, but are within negative territory, supporting the case for a bearish extension. The first milestone towards the downside is 1.0910, the post Brexit low, followed by the 1.0800/40 region. The market will need a huge trigger to push the pair below this last, but if it does, the mentioned 1.0460 is the probable bearish target for this second half of 2016. Is still unclear whether the pair can reach parity, without the FED moving rates.

In the case of a recovery, the 100 SMA in the weekly chart at 1.1330, which is also a quite relevant static resistance level as the pair has multiple daily highs and lows around it from this year, is the immediate target and the level to beat to see further gains, up to the major 1.1460 region. Beyond this last, the pair has 1.1615, May 2016 high, and 1.1713, August 2015 high. It seems unlikely that the price can get beyond this last this year, unless the US Federal Reserve changes course and cuts back rates, opening then doors for an advance up to 1.1850. Still if growth and inflation continue to be sluggish in Europe, the most likely scenario is the one where the pair won't be able to rally steadily beyond the critical 1.1460, particularly considering that the US growth´s pace has been firmly improving for over a year already and there are no signs that things will turn to the worse.