Many Europeans are unhappy with the political system ten years post-crisis may vent their anger in the European elections, frustrating further integration -- thus sending the euro down. That is the main narrative of the upcoming EU elections. And despite a higher level of employment, a significant chunk of the 400 million eligible voters feel anxious about immigration, Russia, US isolation, among other issues.

We outlined these views here: Anti-EU populism rise not priced in the EUR, European election could hit Euro

However, a populist backlash may not necessarily be the case.

Why pro-EU parties may gain

A recent poll by Eurobarometer showed that 62% of Europeans see the EU as a good thing, the highest since 1992. 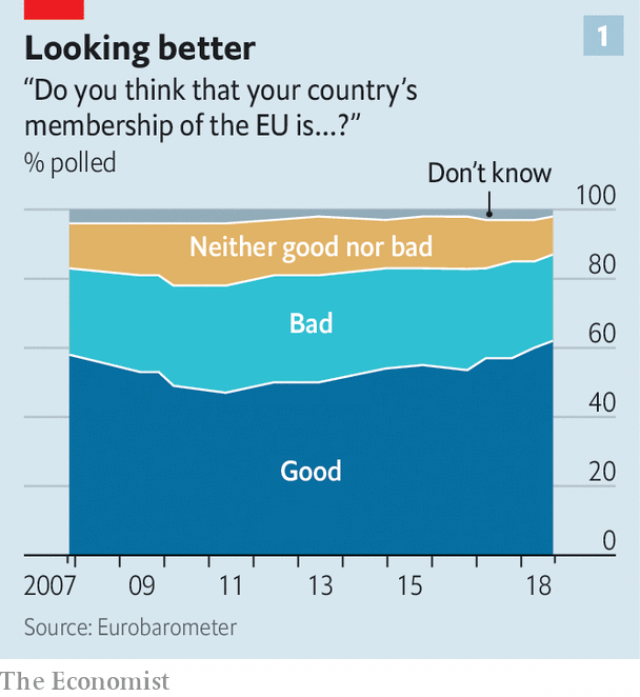 Positivity reached its lowest since 2012, deep in the crisis. As the economic situation improved, support for the bloc rose. And the project received another boost after Brexit. Instead of speculating on the next country to leave, more people began seeing the importance of the bloc and feared the consequences of leaving it despite all the troubles.

And while populists are on the rise, they have quietly stopped talking about holding Brexit-style referenda or leaving the euro-zone. Moreover, amid external threats from Russia and the distancing US, some see more need for a robust European body.

Another reason why pro-European parties may outperform expectations stems from fear from the populists. The incessant talk may bring more people to the polling stations and raise the dismally low turnout seen in previous editions.

Overall, there is a case to be made for a rise in support for pro-European, mainstream parties.

The effect on EUR/USD depends not only on expectations for the composition of the new European parliament but more specifically on the results in the four largest countries in the euro-zone: Germany, France, Italy, and Spain. The UK, another large country, is not on this list. Britain uses its own currency and is set to leave the EU.

Let us run through the big four, from bottom to top:

Spain - Populists are not so anti-EU

The fourth-largest economy in the zone is not immune to populists. It has seen the radical right-wing Vox party enter parliament in its recent elections. However, the leaders are not calling for a "Spexit," and they received fewer votes than expected.

Moreover, Spain is the rare European case in which the center-left gained ground and won the elections. And in general, the southern European country is generally pro-European.

Italy - Big League wins for Salvini are probably priced in

Contrary to Spain, the populists are in power in Italy. Both coalition partners, the 5-Star Movement, and the League have clashed with Brussels on the budgets. League leader Matteo Salvini gathered like-minded ultra-right parties in Milan ahead of the elections, placing himself as one of the top anti-EU figures. His party is projected to make substantial gains in the upcoming polls.

Yet for euro traders, this may already be priced in. Worries about Salvini are not new for, and his recent rejection of Brussels measures is seen as part of the campaign rather than a real threat.

President Emmanuel Macron's approval rating is scratching the bottom and his 2017 presidential rival, Marine Le Pen is set to make gains. The Gilets Jaunes (Yellow Vest) protests that engulf France since November may turn into votes for the populist Le Pen.

Opinion polls show both leaders neck and neck in the polls. A small victory for Le Pen would not be surprising and is also probably priced in. If Macron comes on top, it may add a few pips to the euro.

Germany - It all depends on Merkel's response

Angela Merkel's CDU/CSU center-right group and the center-left SPD have both suffered losses in the 2017 national elections and eventually formed a coalition that is suffering from falling approval rates. Regional elections forced Merkel to step down from her party's leadership while staying in the Chancellery.

The main populist party is Alternative for Germany (AfD). The right-wing group that had its roots in calling for leaving the euro moved on to opposing immigration and has gained ground in German elections.

The upcoming ballot will likely see similar results: fewer votes for the centrist parties and more for the populists. And like in Italy and France, this is probably baked into the price.

So, concluding the tour of these four countries with the largest one, is the euro set to rise? We have not finished with Germany just yet.

Merkel's party is the most significant contributor to the biggest bloc in the EP: the center-right EPP and both are expected to lose ground as mentioned earlier.

Yet the reaction in the euro could quickly turn negative if Merkel personally responds to the poll by announcing she will step down. She has served since 2005 and is seen as a beacon of stability in the old continent. Moreover, her successor Anagret Kramp Karrenbauer (AKK) may be unable to maintain the grand coalition with the center-left SPD.

A lack of leadership in Europe's locomotive may send EUR/USD lower.

Expectations for a populist backlash against the EU may lead to a positive surprise that may boost the euro. However, if the most powerful person in the continent quits, the common currency has room to fall.