The EUR/USD pair has fallen to a three-month low of 1.1781 but managed to trim losses and bounced back to close the week pretty much unchanged at 1.1860. The American currency was bid through the first half of the week in anticipation of the FOMC Meeting Minutes. The US central bank surprised market participants in its June meeting by forwarding changes of rate hikes amid economic improvement.

The document showed that policymakers are still waiting for “substantial further progress” toward their inflation and employment goals before changing their monetary policy.  Officials are still “talking about talking about” tapering and took investors off guard with a dovish Minutes. Indeed, policymakers acknowledged economic progress, yet at the same time, they pledged to maintain financial support.

The greenback picked at the mentioned high against the EUR after the release, trading unevenly across the board afterwards as risk-aversion took over financial markets. Eyes were on US government bond yields, which fell to their lowest since February, amid renewed concerns about global economic growth. The rapid spread of the coronavirus Delta variant in Europe and the US spurs concerns about another delay in returning to “normal.”

Meanwhile, the European Central Bank has a special meeting where the Committee discussed running unconventional monetary policies. The ECB decided to let inflation slightly overshoot its 2% target to avoid the risk of premature tightening. President Christine Lagarde referred to the new policy as “symmetric inflation,” quite similar to the stance the Fed adopted last year. Generally speaking, European policymakers seem to be more concerned about the risk related to the pandemic and its effects on the economy.  Also, the ECB published the Minutes of their latest meeting, which showed that members debated reducing bond purchases but broadly agreed that preserving favourable financial conditions over the period of the pandemic remained essential.

The market’s sentiment somehow bettered on Friday, with stocks trimming part of their weekly losses and cooling demand for safe-haven bonds. Nevertheless, investors remain on their toes, and sudden risk-off runs toward safety remain on the table.

Lacklustre data both shores of the Atlantic

Cold numbers released this week were mostly disappointing, underpinning concerns about further growth. As mentioned in previous updates, economies seem to have reached a plateau, still below pre-pandemic levels.

Markit published the final readings of its June Services PMIs, which were downwardly revised in Germany and the US, although the final EU reading improved from 58 to 58.3. The official US ISM Services PMI for the same month printed at 60.1, contracting from the previous 64. Also, Initial Jobless Claims for the week ended July 2 ticked higher, to 373K against the expected contraction to 350K.

German figures were the ones that disappointed the most. Factory Orders contracted into negative levels in May, while the July ZEW survey indicated that the Economic Sentiment was sharply lower. Industrial Production in the country also fell into the negative ground in May, while the Trade Balance surplus resulted in €12.6 billion.

The upcoming week will be a light one in terms of macroeconomic releases. On Tuesday, Germany and the US will release their respective June inflation figures, while the EU will unveil its own data on Friday. On Thursday, the US will publish the usual employment-related numbers, while on Friday, the country will release June Retail Sales.

The EUR/USD pair hovers around 1.1860, maintaining the neutral-to-bearish stance in the longer term. The weekly chart shows that it posted a third consecutive lower low and a sixth consecutive lower high. In the mentioned time frame, the 20 SMA gains bearish strength above the current level, while the longer ones stand in the 1.15 area, losing bullish strength. The Momentum indicator holds directionless just above its midline, while the RSI indicator lacks strength at around 43.

Bears retain control according to the daily chart. The 20 SMA heads lower almost vertically above the current level, extending its slump below converging 100 and 200 SMAs. The Momentum indicator is retreating from its midline, while the RSI hovers around 39 without clear directional strength.

The main resistance level is 1.1920, the 61.8% retracement of the May/March rally. The pair needs to advance beyond such a level to extend its recovery toward the 1.2000 critical threshold. Bulls will take over if the pair advances beyond the latter. Below 1.1781, the pair could complete a full retracement to 1.1712, the March monthly low. 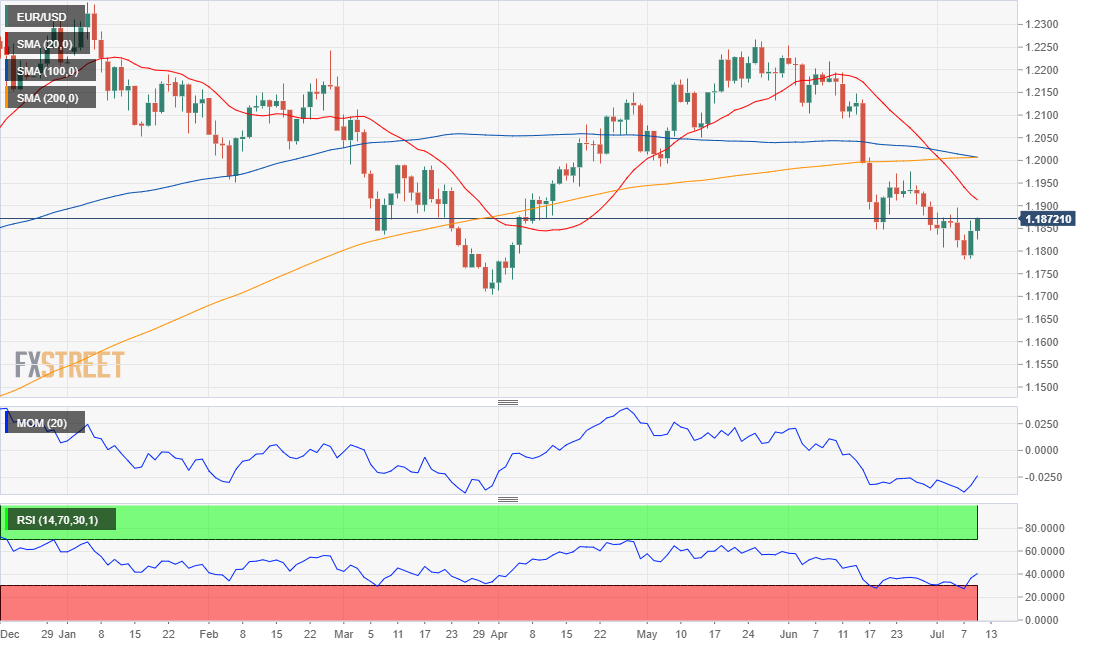 The FXStreet Forecast Poll indicates that the dollar’s prevalence will extend next week, with the EUR/USD pair seen on average at 1.1831, as 50% of the polled experts are betting on a decline. The picture changes abruptly in the monthly and quarterly views as the number of bears decreases sharply. The pair is expected to regain the upside, and at least attempt to recover the 1.2000 threshold.

The overview chart shows that the weekly moving average picks up, despite lower targets at sight, while the longer ones remain directionless. Near-term, it is a sign of easing selling pressure, while the wider view indicates that buyers are not yet fully convinced. The spread of possible targets in the quarterly perspective has increased, although most are still below 1.2000.