Market players were reluctant to buy the greenback, yet the American dollar ended the week with gains against most major rivals. The EUR/USD pair peaked at 1.1172, now trading near 1.1100, as upbeat American data weighed more than risk-appetite. The pair’s volatility remains restricted, with the pair confined to a 50 pips’ daily range on average.

The most relevant event these last few days was the signing ceremony of phase one of the trade deal between the US and China. It was sort of disappointing, as it didn’t include rolling back tariffs, something the markets believe is essential to boost global growth. The event had loads of noise but little of substance, with US President Trump announcing that the mentioned agreement means that China will be spending $75 billion on manufacturing imports, $50 billion on energy imports, $50 billion agriculture imports and $40-50 billion on service imports from the US.

China, on the other hand, clarified that much would depend on getting competitive prices. That said, the agreement, while encouraging, fell short of expectations. Indeed, there would be a phase two, and levies will be revised then, according to Trump.

Maybe the biggest drag of all is the fact that the market needs some certainties and is not getting them, neither in the trade war front nor in the Brexit one. The absence of a clear long-term trend is directly linked to these uncertainties.

Risk appetite pushed Wall Street higher and kept the dollar in check until Thursday when the US released December Retail Sales. The headline reading came in line with the market’s expectations, but the sub-components resulted upbeat, triggering a dollar’s recovery that extended on Friday. Clearly, US data continues to indicate that the economy is doing well and better than that of its major counterparts.

The upcoming week will start with a holiday in the US but will be fulfilled with relevant data. On Tuesday, Germany will release the January ZEW Survey of Economic Sentiment, seen retreating from December peak. On Thursday, the ECB will announce its latest decision on monetary policy, while the US will release January Consumer Confidence.

In the last trading day of the week, Markit will unveil the preliminary estimates of January PMI for both economies, and for the EU, manufacturing output is seen contracting further, while the services indexes are expected to improve.

The EUR/USD pair pierced the 1.1100 figure this Friday, modestly lower yet down for a third consecutive week. The pair is battling with a daily ascendant trend line coming from November 29 low at 1.0980, and not far above January’s low at 1.1084.

The weekly chart shows that the pair held above the 20 SMA but far below the larger ones, while technical indicators turned south, currently within neutral levels.

In the daily chart. the upside has been capped by the 20 and 200 SMA, both converging around 1.1140, while technical indicators head sharply lower within negative levels and at their lowest since last November.

The risk remains skewed to the downside, with the mentioned monthly low providing immediate support ahead of the 1.0980 level. Below this last, the next possible bearish target is the 1.0900/20 price zone. 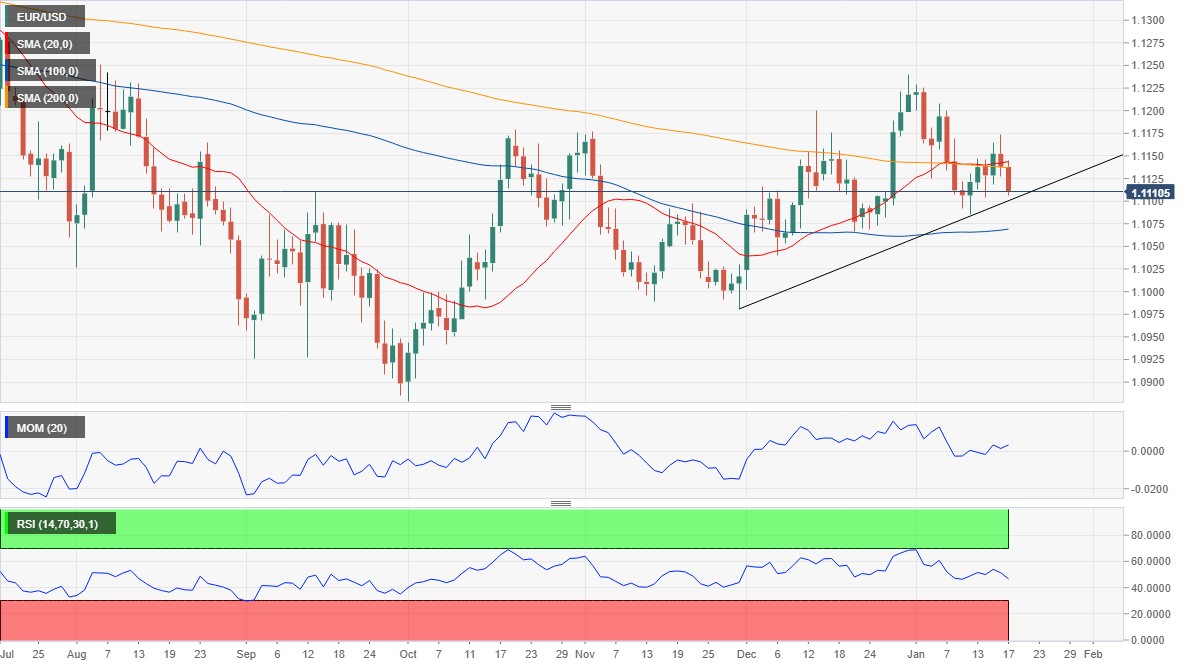 The FXStreet Forecast Poll signals a recovery despite the negative technical stance, as the sentiment is bullish in the three time-frame under study. However, the average target in all cases is within the 1.11 handle, somehow suggesting that speculative interest is not fully convinced.

The Overview chart shows that the three moving averages have turned horizontal, with an almost even amount of targets above and below the current price in all cases, indicating that investors are unable to shrug off the uncertainty and make firmer bets.

USD/JPY Forecast: How high can the trade deal take it? Eyeing US PMIs and the BOJ

AUD/USD picks up fresh bids and regains 0.7300 amid fresh US dollar selling across the board, as the market sentiment remains mixed starting out a fresh week.  Upbeat comments from Aussie PM Morrison and Chinese President Xi Jinping favor the bulls despite PBOC's status-quo.