The shared currency managed to recover some ground this week after hitting a fresh yearly low the previous one, although no relevant breakout was seen. The pair remained around the 1.1340 region for the last three trading days, with dojis for all of them reflecting the market's sentiment toward both currencies. The EU gave further signs of slowing economic progress, while the greenback started the week with a soft footing ahead of the release of the FOMC Meeting's Minutes, amid speculative interest rushing to price-in a dovish statement. The document was not as bad as feared, giving a respite to the dollar, although clearly reaffirming the 'patient' stance adopted in January, which kept gains for the American currency at check.

US policymakers agreed to be flexible on the balance sheet normalization, although the reduction is seen ending, pledging to announce their plans on that front later this year. Regarding rate hikes, the Federal Reserve left doors opened for additional hikes if macroeconomic conditions improve. By the way, US data released these last few days was quite discouraging, as December Durable Goods Orders rose by less-than-expected, while the core capital goods orders unexpectedly fell by 0.7%. Also, Existing Home Sales declined by 1.2% in January vs. a 0.8% advance expected, while the Markit Manufacturing PMI fell to 53.7 in February, at least holding in expansionary territory.

Not that the EUR had solid reasons to appreciate either, as an economic slowdown keeps knocking the Union's doors. According to Markit, the manufacturing sector fell into contraction territory in February, for the first time in almost six years, both in Germany and the EU. And while there was a modest uptick in services activity, it was far from enough to offset contracting industrial developments. IMF head, Christine Lagarde, put another stone on EUR's back after warning about the possibility over further downgrade to the German growth outlook by the fund.

This past week's events have confirmed the precedent macroeconomic picture, that is, that these two currencies are engaged in the battle of the 'less' weak. During the next one, the EU and Germany will release preliminary inflation estimates for February, while the US calendar will be much busier, as it will include several of the reports delayed by the partial government shutdown, with the most relevant event being Q4 preliminary GDP, foreseen at 2.4% vs. the previous 3.4%.

The weekly chart shows that the pair is currently battling with its 200 SMA, unable to surpass it, while the intra-week peak stalled a handful of pips below a bearish 20 SMA. Technical indicators in the mentioned chart remain below their midlines, although without directional strength, leaning the scale to the downside without confirming it.

In the daily chart, the pair is poised to post a third consecutive doji in-a-row, a sign that there's no winner yet in this battle. It is also developing below all of its moving averages, which maintain downward slopes while technical indicators lack directional strength, but hold within negative levels, skewing the risk to the downside.

The pair has held above the 1.1300 level ever since breaking above it, so below it, bulls will likely get discouraged. The next relevant support is 1.1215, the low set in November 2018, followed by the 1.1160 price zone. The mentioned Fibonacci resistance that capped advances this week stands at 1.1375, with gains beyond it favoring an extension toward 1.1460 the most. 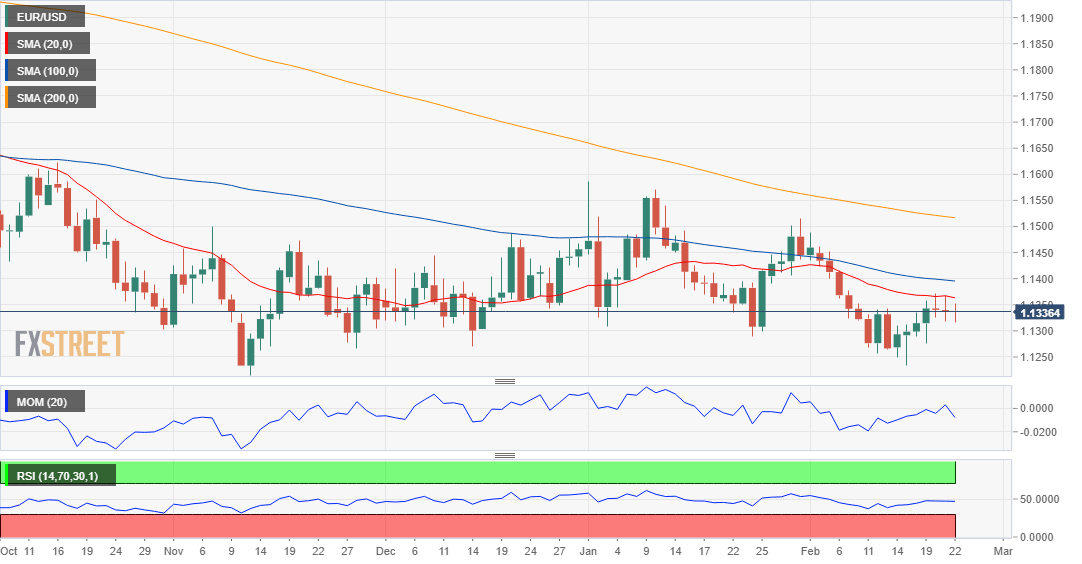 The FXStreet Forecast Poll indicates that the pair will likely continue falling next week, although the number of sellers has decreased from over 70% to 60%, with the average target now at 1.1304, slightly above the previous one at 1.1246. The pair is seen bullish in the 1 and 3 months perspectives, with the number of bears sharply down. The average targets in both cases are just below the 1.1400 figure.

The Overview chart shows that the moving averages lack clear directional strength, although, in the monthly perspective, the largest accumulation of targets is between 1.14 and 1.16, suggesting that the pair could rise in the upcoming weeks. The same picture is seen in the quarterly view, with most possible targets accumulated above the current level.

The Dollar’s initial weaker reaction to Thursday’s May inflation report, (it continued to rise to 5% annually from the 4.2% seen in April and the CORE reading at 3.8% was close to a 30-year high), which sent the USDIndex to test the week’s low zone at 89.90, was short – lived