This was the week: Trade progress, Fed dovishness

USD/JPY traded in range amid a mix of events that kept things balanced.

Trade: Talks between the US and China moved to Washington, and both sides expressed optimism. President Donald Trump expressed his satisfaction with the progress that was made. The parties are reportedly working on six memorandum documents. However, a meeting between Trump and his Chinese counterpart Xi Jinping has not been scheduled at the time of writing.

The news pushed the pair higher on diminishing demand for the safe-haven yen.

Dovish Fed: The FOMC Meeting Minutes confirmed the dovish twist, showing broad support for the new patient approach. A rate hike has not been entirely ruled out but does not seem likely at this point.

The news weighed on the greenback.

US events: Powell and US GDP

After a slow start on Monday, housing starts and building permits for December provide another look at the slowing housing sector. The data serve as a warm up to the main event of the week: the testimony by Fed Chair Jerome Powell.

Powell's testimony was delayed from December, and his words now come ahead of the all-important March decision. The Fed Chair already oversaw a dovish twist in January, by pledging patience on rates. While markets are pricing out a hike in 2019, there is a lot of uncertainty. The most-recent dot-plot from December pointed to two hikes this year.

Will the Federal Reserve downgrade the projection to no hikes? Open the door to cuts? Or still, intend to increase interest rates? The prepared statement and the lengthy Q&A sessions on Tuesday and Wednesday could provide some clues.

After receiving the belated durable goods orders report for December, the one for January is released on Wednesday. The non-defense ex-air measure will be closely watched. A bounce is much needed after the disappointment.

The second critical event of the week awaits traders on Thursday: Q4 GDP. At this point in the quarter, the US releases the first revision for GDP. Due to the government shutdown, we will get any kind of estimate just now. The economy grew by 3.4% annualized in Q3, lower than Q2 but a healthy pace nonetheless. A return to the "new normal" is due now, somewhere along the lines of the 2% handle. How low has growth gone? There is a lot of room to the downside after the unimpressive retail sales report.

Significant data are also due on Friday. The Core PCE Price Index is projected it will likely remain unchanged in Januar, at around 1.9% seen in December. The number is the Fed's preferred gauge of inflation.

The last word of the week belongs to the ISM Manufacturing PMI. The forward-looking survey took a big dive in December but bounced back to 56.6 in January, reflecting robust growth. Apart from serving as a snapshot for the industry, it also provides the first hint towards next week's Non-Farm Payrolls report. The Price Paid component is also of interest, as a measure of inflation. It fell to 49.6 in January, indicating falling prices.

Trade talks reach a critical phase as the US-imposed deadline is on Friday, March 1st. If the progress made so far results in a deal, whether comprehensive or a bare-bones one, markets will cheer, and the pair could rise. In case the world's largest economies decide to prolong talks, it will likely have a similar outcome.

However, if negotiations conclude with the US walking away in anger and announcing new tariffs, markets could tumble. The most likely scenarios are that talks are either prolonged or that a general framework is agreed upon.

The safe-haven yen may be guided by the second summit between Trump and North Korean leader Kim Jong-un. The two will meet in Vietnam amid little progress towards the denuclearization of the Korean peninsula. Expectations are quite low, but the calm on this front is harmful for the yen. Any breakthrough is unlikely to rock the boat, but if the summit ends in acrimony, the yen could see demand.

Japanese events include retail trade, industrial output, and most importantly, the fresh inflation figures from Tokyo, which are for February. Core prices remain well below the 2% target set by the Bank of Japan. No big movements are likely.

Dollar/yen has not moved that much, but the technical picture remains slightly positive. The pair enjoys upbeat Momentum and trades above the 50-day Simple Moving Average. The Relative Strength Index is above 50 but below 70, thus not reflecting overbought conditions.

Resistance awaits at around 111.15 which was the high point so far in February. The next line to watch is 111.75 which provided support late in 2018. 112.20 was a double bottom in November and December and now works as significant resistance. 112.60 worked in both directions in mid-2018. 113.10 provided support when the pair traded on high ground back in December. 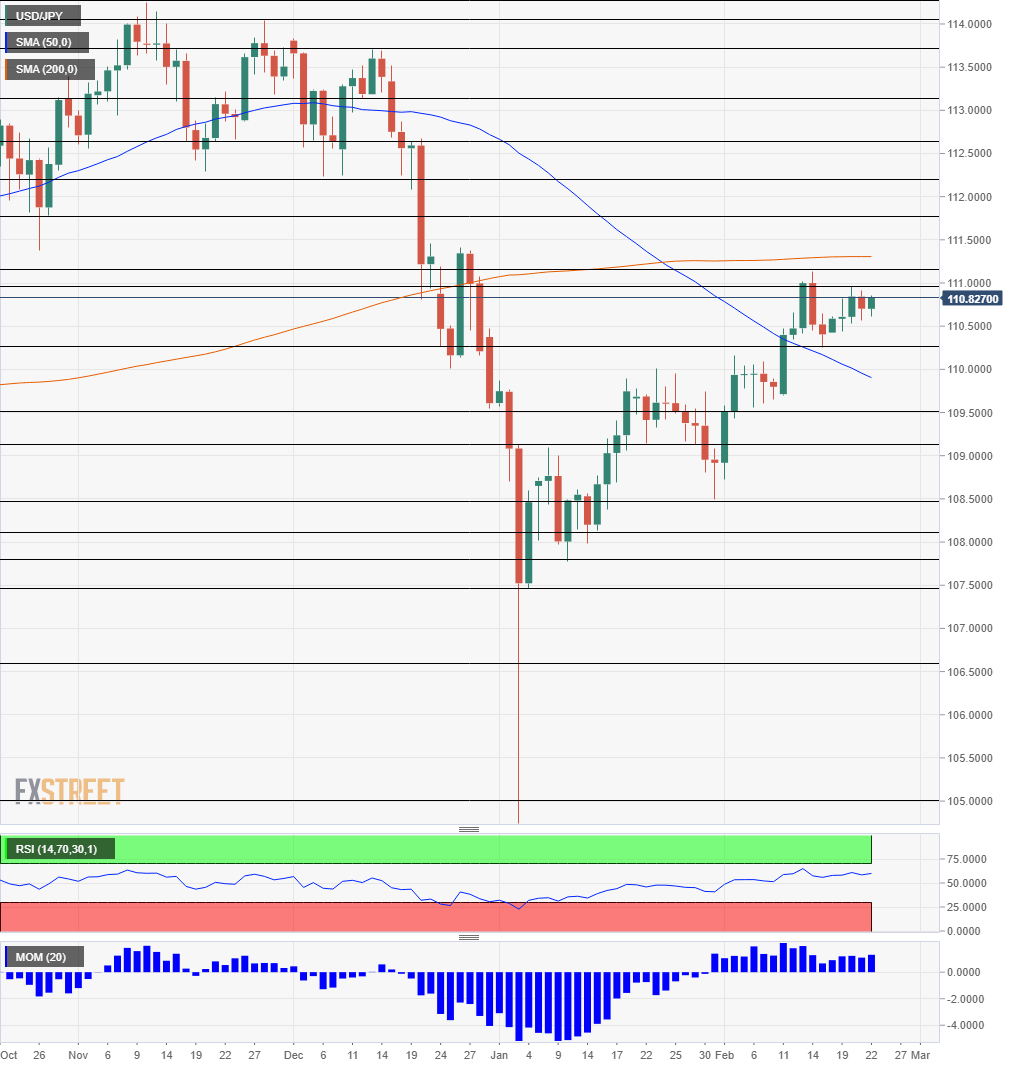 Trump seems eager to clinch some kind of deal with China, but that is the only thing going for the pair. Powell may not be dovish enough for markets, especially as the US shows more and more signs of slowing down. All in all, the safe-haven may find demand.

The FXStreet forex poll of experts shows a bullish tendency on all timeframes. However, the targets are not that far from the current price. The average forecasts have been upgraded in the short and medium terms and barely changed in the long term.