US stocks declined sharply on Tuesday as investors waited for the upcoming consumer inflation data. The Dow Jones declined by more than 200 points while the S&P 500 and Nasdaq 100 indices declined by more than 0.50%. Economists expect the data to show that the country’s inflation surged to a 30-year high of 5.8%. This increase is due to rising energy prices and the fact that many companies have been forced to hike wages. Also, the ongoing logjam in global logistics has led to parts shortages, which has led to higher prices. Still, the Federal Reserve expects that consumer prices will moderate in the coming year.

Tesla shares continued dropping on Tuesday as investors reacted to news that Elon Musk will sell shares. In a weekend poll, the company’s CEO ran a poll on whether he should sell a 10% stake in the company. The poll attracted more than 3 million voters, most of which recommended that he should sell them. If he does, it means that he will sell shares worth about $20 billion. It was also revealed that his brother sold a stake in the company before he ran the poll. Another top mover on Tuesday was General Electric. The company said that it will break itself into three publicly traded companies. The three will deal with healthcare, aviation, and energy. Coinbase shares also declined in extended hours after the company published its earnings.

The economic calendar will have limited events today. In addition to the American inflation, the market will watch out for the upcoming German inflation data. Analysts expect that the country’s inflation data rose by about 4.5% in October. This will be the highest figure in years. Another key data will be the latest US inventories numbers. The data is expected to show that oil inventories jumped by more than 2.12 million barrels last week. These numbers come at a time when oil prices are close to a multi-year high.

The XAUUSD pair jumped to a multi-month high of 1,830 ahead of the US inflation data. The pair has managed to rise from a low of 1,720 in September this year. It is also attempting to move above the important resistance at 1,833. The pair is also slightly above the 25-day and 50-day moving averages while the RSI has moved to the overbought level. Therefore, the pair will likely keep rising as bulls target the key resistance at 1,900. 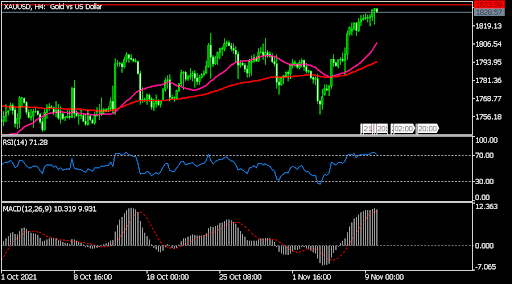 The EURUSD pair was in a tight range as investors waited for upcoming US inflation data. It is trading at 1.1587, where it has been in the past few days. The pair has also formed a small head and shoulders pattern. It is also along the middle line of the Bollinger Bands. The MACD and the Average True Range have been relatively unchanged. Therefore, the outlook of the pair is neutral ahead. 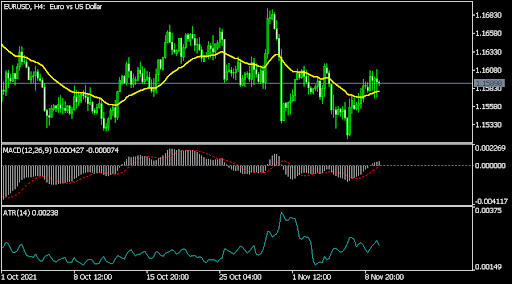 The USDJPY pair has been under intense pressure in the past few days. The pair is trading at 112.88, which is slightly above this month’s low of 112.73. On the four-hour chart, the pair has moved below the envelopes indicator. It has also moved below the key support level at 113.26 while the Relative Strength Index (RSI) has moved from the oversold level. Therefore, the pair will likely remain in this range for a while. 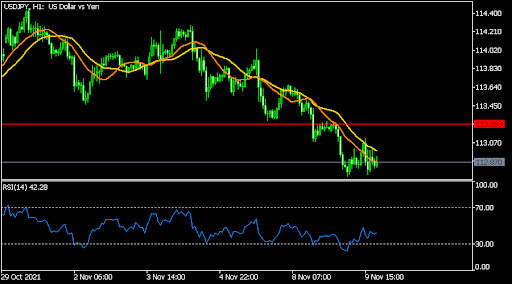