You see a commodity going down, then it reverses and starts teasing you with an upward move… only to end up declining further. Is this the case now?

I started yesterday’s analysis with a question that I then replied to, explaining why I thought that it wasn’t necessarily a good idea to take profits from one’s short positions at this time, as the corrective upswings could be nothing to write home about, and that it might not be that easy to get back in the short positions at better (higher) prices.

Well, yesterday’s session showed exactly what I meant, and the 4-hour chart found below provides the details. 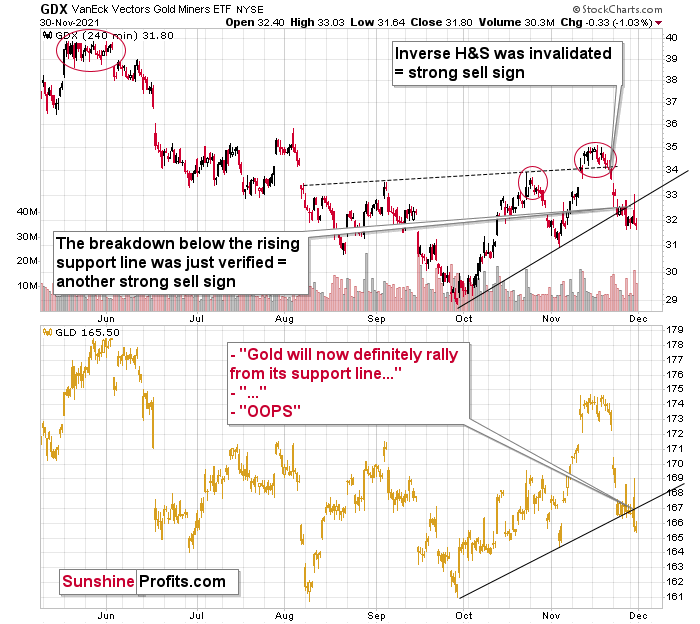 First of all, gold stocks were first to break below their rising support line – which happened a couple of days ago. Gold moved decisively below its rising support line only yesterday. This emphasizes that gold stocks are leading gold lower. This, in turn, is a bearish confirmation in itself, as that’s what tends to happen at the beginning of a bigger move lower.

The way both markets performed yesterday was also quite interesting.

In case of mining stocks, the intraday rally took GDX just slightly above its rising support line and then miners moved back down in a flash. In other words, if anyone had exited their short positions in order to re-enter them at higher prices, they had very little time to do so, and the most realistic version of this scenario is that they ended the session while missing the 1% decline in the GDX. The silver price was down by just 4 cents, but still, it was a move lower despite an intraday rally.

In the case of GLD, one might have thought that gold was bound to rally since it stopped at its rising support line (based on the Sep. and Nov. lows). And gold even rallied by about $20 intraday… Only to decline more and end yesterday’s session lower.

That was not a reversal. That was a bull trap.

And the most bearish thing about yesterday’s decline – and weakness? It happened while the USD Index moved lower during the day. The USDX ended the day 0.33 lower, which “should have” triggered gold’s rally. Instead, gold declined, proving that it really wants to move lower. And suggesting that profits from one’s short positions in mining stocks are likely to become bigger.

Then, after the rebound, gold is likely to decline once again, perhaps to its final lows (for many years to come).