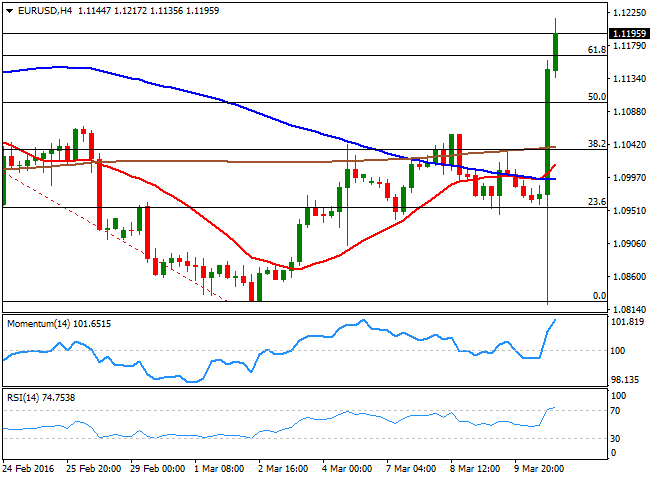 The EUR/USD pair traded in five different big figures this Thursday, from 1.08 to 1.12, compliments to ECB's head, Mario Draghi. The Central Bank delivered much more than what the market expected, putting out all the heavy armor to boost local growth and inflation. The ECB shocked markets by cutting rates across the board, sending the main benchmark  down to 0.0% from previous 0.5%, and the deposit rate to -0.4%, down as expected by 10bp. Also, QE was expanded to €80bn per month starting in April, with the eligible collateral was expanded to include investment grade euro-denominated non-bank corporate bonds, and new four-year TLTROs were added. The pair plummeted down to 1.0821, but within the Q&A following the press conference, Draghi added that the Government Council sees no need for further rates cuts from here.

The comment saw the pair reversing its rally, but also stocks plummeting to fresh monthly lows in Europe, and the EUR/USD topping out at 1.1217 in the American afternoon. Although the initial tough  could be that the market overreacted, the fact is that Mario has fired all of its bullets, pretty much promising ad eternum QE, and no more rate cuts. And speculators have run to price it in, particularly considering recent dollar's weakness.  The EUR/USD pair retreated partially from its highs, but holds near the 1.1200 region, as seems poised to continue advancing, now as long as buying interest surges in pullbacks towards the 1.1120 level. Intraday technical readings are in extreme overbought territory, but more relevant, the pair has breached the 61.8% retracement of its latest daily slide around 1.1160, the immediate support, while trading above its 100 and 200 DMAs. 1.1245 is the level to watch as a break above it can see the pair rallying up to 1.1460 a major long term resistance during the upcoming days. 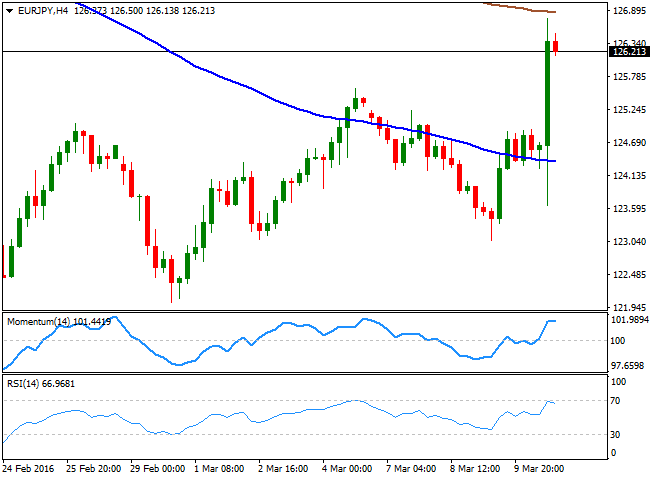 The EUR/JPY pair surged to its highest since February 18th, printing 126.76 before shedding some 50 pips by the end of the US session. The markets were all about the EUR and how investors reacted to the ECB's easing announcements, with the common currency playing catching up after being on-hold ever since the week started. The pair is currently at a major breakout point, as the bearish long term momentum has accelerated once the pair broke below the 126.00 level. Should the pair keep running beyond it during the upcoming Asian session, an interim bottom can be confirmed, followed by a continued advance. Short term, the 1 hour chart shows that the pair is in a consolidative stage above 126.00, while the technical indicators have turned slightly lower within overbought territory, indicating some upward exhaustion. In the 4 hours chart, the technical indicators have lost upward strength near overbought levels, but are not yet signaling a downward move. In the daily chart, the 100 DMA stands at 129.30, and while the level may change, as we are talking about a dynamic indicator, the market may well push the price up to it over the upcoming sessions. 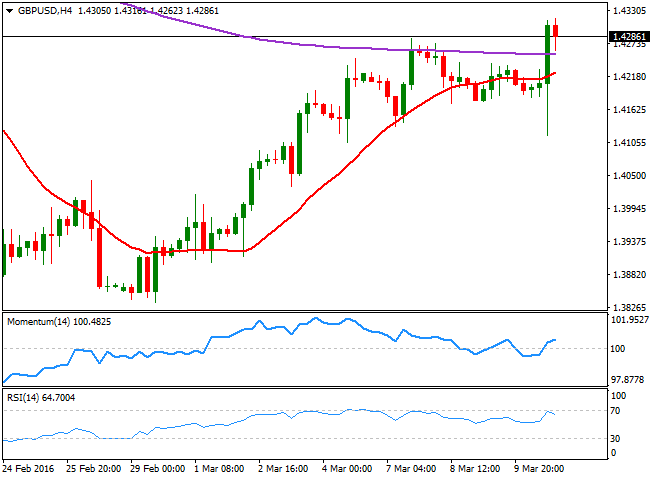 The GBP/USD pair fell down to 1.4117 on the back of dollar's rally post-ECB announcement, but managed to recover towards a fresh 3-week high of 1.4316 as the American currency resumed its slide. Pound had no life of its own this Thursday, as the macroeconomic calendar remained empty in the UK,  for the most, replicating EUR/USD behavior within a narrower range. On Friday, the United Kingdom will release its January trade balance figure, with a larger deficit expected, and the Consumer Inflation expectations, latest at 2.0%. Better-than-expected readings can push the pair higher, leaving it poised to test the 1.4500 mark next week. Short term, the 1 hour chart shows that the price is well above a bullish 20 SMA, but that the technical indicators are retreating partially from near overbought territory, still well into positive territory. In the 4 hours chart, the price is holding above the 200 EMA for the first time since early February, while the technical indicators have recovered above their mid-lines, back lack enough upward momentum to confirm further gains at this point. An advance beyond 1.4335 however, will likely confirm an upward continuation, with Friday's target at 1.4410. 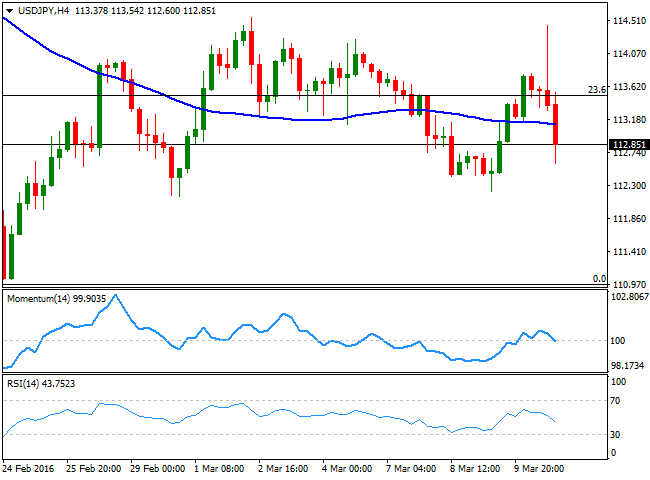 The USD/JPY pair rallied up to a fresh weekly high of 114.44, as the dollar got benefited from the ECB's decision of implementing several different measures to boost local growth and inflation. The advance was also supported by improved US data, as weekly unemployment rates dropped to a 5-month low of 259K in the week ended March 4th, well below the 275K expected. But the pair turned south as stocks trimmed daily gains and fell deep in the red, shedding over 150 pips from the mentioned high. Now trading below the 113.00 figure, the technical picture has been barely affected by all this noise, retaining the dominant bearish trend. Short term, and according to the 1 hour chart, the pair can continue falling during the upcoming hours, given that the price is well below the 100 and 200 SMAs after a short lived advance beyond them, while the technical indicators remain near oversold territory, having partially lost their bearish slopes. In the 4 hours chart, the technical indicators have turned lower, and are currently crossing their mid-lines towards the downside, supporting additional declines particularly on a break below 112.10. 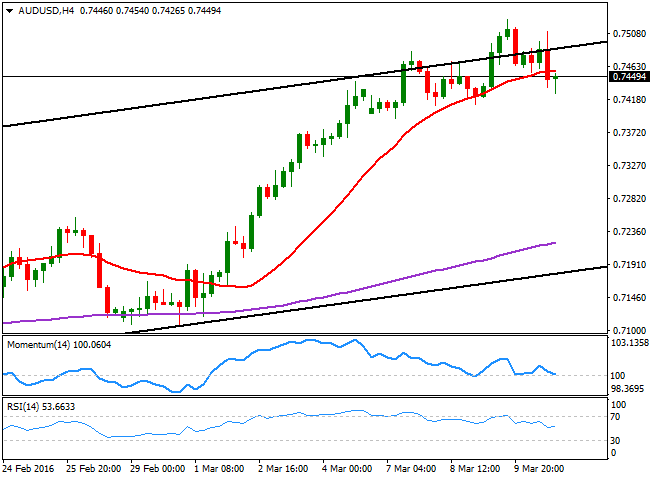 The Australian dollar was unable to ignore market's wild moves, and eased from the multi-month high set at 0.7516 against the greenback, tracking stocks slump. Nevertheless, commodity-related currencies were the less affected by the ECB's madness. The Aussie was supported at the beginning of the day by better-than-expected Chinese data, as latest inflation figures showed that the CPI rose by 2.3% in February, beating expectations of a 1.9% advance. Producer prices fell 4.9% year-over-year, compared with a 5.3% contraction in January, and in line with market's expectations. The intraday decline has hardly affected the dominant bullish trend in the AUD/USD pair which set yet another higher low daily basis. In the short term, the 1 hour chart shows that the pair is currently developing below the 20 SMA, whilst the technical indicators remain below their mid-lines, having, however, bounced from near oversold readings. In the 4 hours chart, the price is also below its 20 SMA, currently the immediate resistance around 0.7460, while the Momentum indicator heads south, right above its 100 level, and the RSI indicator has turned flat around 53, all of which maintains the downside limited.