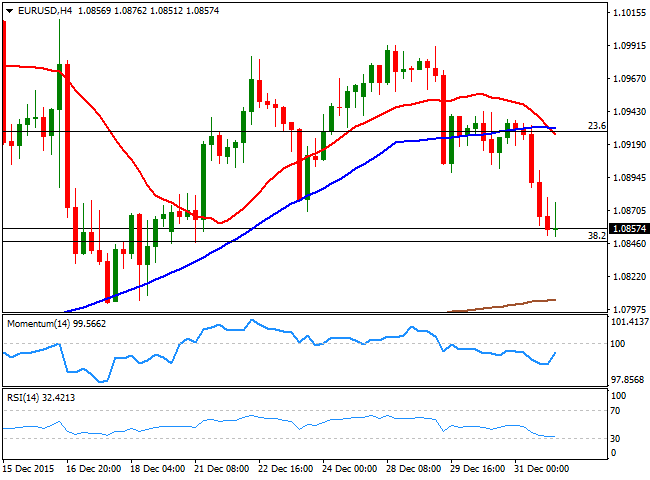 The EUR/USD fell at the last trading day of 2015, with the dollar edging broadly higher in thin markets. The common currency has ended the week also in the red, although it managed to gain some ground this December, helped by the surprisingly soft decisions taken by both Central Banks, as the ECB made the slightest extension of QE ever, while the US Federal Reserve pulled the trigger with a largely anticipated 25bp rate raise. Trading volumes have been limited due to the Christmas and New Year's end holidays, and it will take some time to see the market return to its normal. In the meantime, the calendar will be pretty busy this Monday, with the release of the EU manufacturing PMIs, German inflation data and some US manufacturing figures.

The pair lost the 1.0900 level on Thursday, and fell down to 1.0851 stalling a few pips above the 38.2% retracement of the December bullish run, but the overall stance is bearish, given that the daily chart shows that the price was rejected from its 20 DMA while the technical indicators have gained bearish slopes below their mid-lines. In the same chart, the 100 DMA contained the rally earlier in the month, and presents a limited bearish slope above the shorter one. In the 4 hours chart, the price is below a now bearish 20 SMA that converges with the 23.6% retracement of the same rally in the 1.0930 region, while he technical indicators are aiming to bounce within negative territory, limiting chances of a recovery as long as the price remains below 1.0880 the immediate resistance. 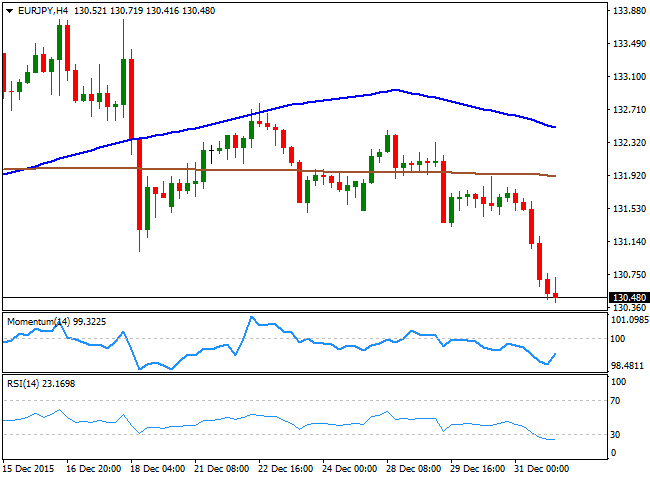 The EUR/JPY pair plummeted on EUR's weakness, with the pair ending the week near the low set at 130.41. With the yen pretty much directionless ever since the year started, the pair was led by EUR self strength, or weakness, for most of this 2015, as the Japanese yen closed the year pretty much unchanged against the greenback. The low for the year was set at 126.08 last April, when the EUR/USD also bottomed at 1.0461, and despite being far from it, the technical setup favors a retest of such low, as in the daily chart the price has extended further below its 100  DMA, whilst the technical indicators have turned sharply lower below their mid-lines. In the shorter term, the 4 hours chart shows that the technical indicators have lost downward strength within negative territory, with the RSI indicator still holding in oversold levels and far from suggesting an upward corrective move, all of which maintains the risk towards the downside. 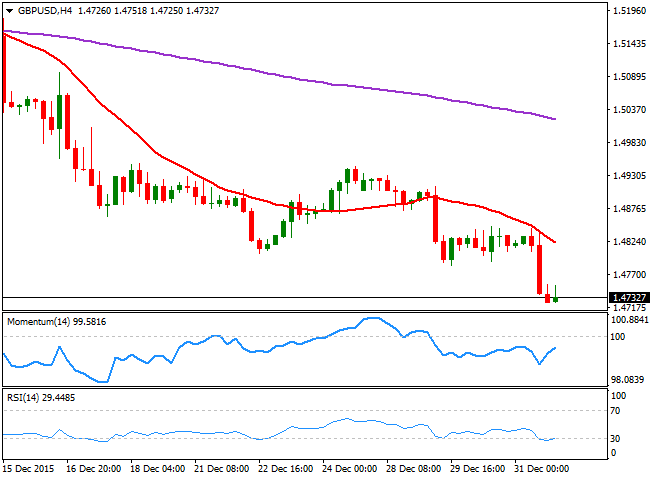 The British Pound was among the biggest losers this December, closing the month against the greenback at a fresh 8-month low set at 1.4725. The movement may have been exacerbated during the last two weeks by the reduced volumes, but the Pound has came under pressure mid last year, when chances of a rate hike got diminished by softening local macroeconomic data. The British currency also suffered lately by mounting speculation over a referendum on remaining within the EU, to be launched this year. But for the most,  the GBP/USD plunged as traders unwound their buys taken on confidence on the economic growth. From a technical point of view, the daily chart shows that the price has fallen further below a strongly bearish 20 SMA, while the technical indicators maintain their bearish slopes near oversold territory, all of which supports additional declines. In the 4 hours chart, the price is also well below a bearish 20 SMA while the RSI indicator hovers in oversold territory and the Momentum indicator aims higher, but below 100, pointing for some consolidation ahead of a new leg south. 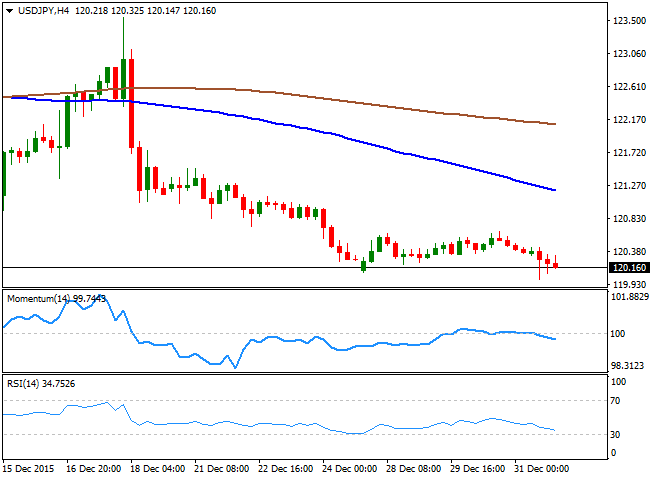 The USD/JPY pair closed the year a handful of pips above its January opening at 119.82, having entered in a  long term consolidative stage ever since topping at 125.85 last May. The pair fell late December, as the BOJ surprised markets by announcing some changes in its economic stimulus policies that anyway were short from investors' expectations. The  pair traded in a well limited range last week, but the Japanese yen gained against its American rival following plummeting stocks, with US indexes having their worse year since 2008. Technically, the USD/JPY pair continues to present a strong downward potential, albeit buyers have been defending the 120.00 psychological figure. Nevertheless and in the daily chart, the technical indicators have failed to advance beyond their mid-lines and resumed their declines within bearish territory, as the price moved further below its 100 and 200 DMAs, in line with further declines. In the 4 hours chart the technical outlook is also bearish, as the price is well below a strongly bearish 100 SMA, and the technical indicators maintain their bearish slopes below their mid-lines. 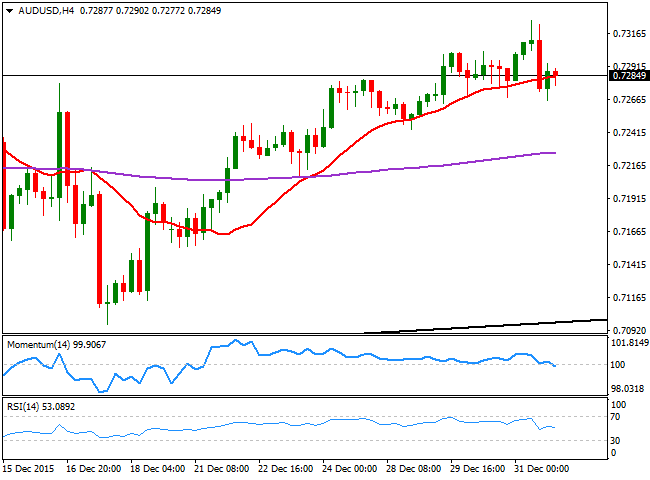 The AUD/USD pair closed December with gains, right below the 0.7300 figure, although far below its January opening at 0.8171. The pair however, seems to have bottomed at 0.6906 last September, and now trades within a large symmetrical triangle that will likely continue defining the trading range ahead of a clear catalyst. Capping the recovery are commodities prices, which came under pressure on a stronger dollar and an oversupplied oil market, and China's economic slowdown. And this last will likely continue weighing on the Aussie, as over the weekend, the official manufacturing PMI for December came out at 49.7, still in contraction territory and below market's expectations of  49.8. Technically, the AUD/USD daily chart shows that the price is above a flat 20 SMA, but that the Momentum indicator has turned south and is about to cross the 100 level towards the downside, while the RSI indicator lacks directional strength above its mid-line, all of which limits the upside. In the 4 hours chart, the price is stuck around a mild bullish 20 SMA while the technical indicators aim lower around their mid-lines, supporting some limited downward corrective move towards the key 0.7240 support that, if broken, will result in further declines during this Monday.

AUD/USD fails to cheer an increase in Employment Change. The pair declines to 0.6678 after flashing the intra-day low of 0.6668 as Australia’s employment data disappoints Aussie traders on early Thursday.

Gold breaks to near 7-year highs amid coronavirus fears, next target is $1,617

WTI upside remains capped by $53.00 ahead of API

WTI oil stays upbeat, following the run-up to the monthly high before a few minutes, as taking rounds to $53.70 amid the initial Asian session on Thursday. The black gold recently benefited from the weekly inventory data from the API.