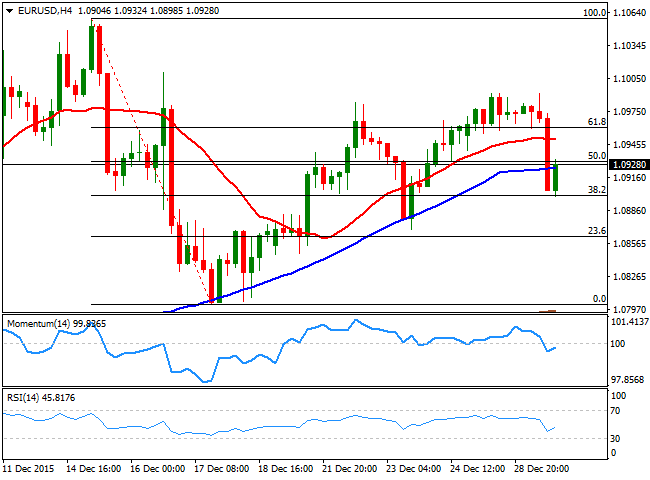 The dollar ended the day mixed across the board, higher against its European rivals, but down again commodity-related currencies, amid a comeback in oil prices. Thin market volume exacerbated some intraday moves, as New Year holidays loom. At the beginning of the US session, the country released its November trade balance, showing that the deficit widened  to $-60.50 from October reading of $-58.41B. The Conference board consumer confidence index, however, surged to 96.5 in December from 92.6 during the previous month.

The EUR/USD pair fell down to 1.0898 before recovering some ground, holding within negative territory intraday and with the technical picture suggesting a limited bearish scope at the time being, given that in the 4 hours chart, the technical indicators have also reversed course and turned higher after briefly breaking below their mid-lines. Also, the decline stalled around the 38.2% retracement of the latest daily decline between 1.1059 and 1.0804, and now hovers around the 50% retracement of the same decline. Trading will continue to remain reduced during this Wednesday, with some second-line data scheduled both, in Europe and the US. 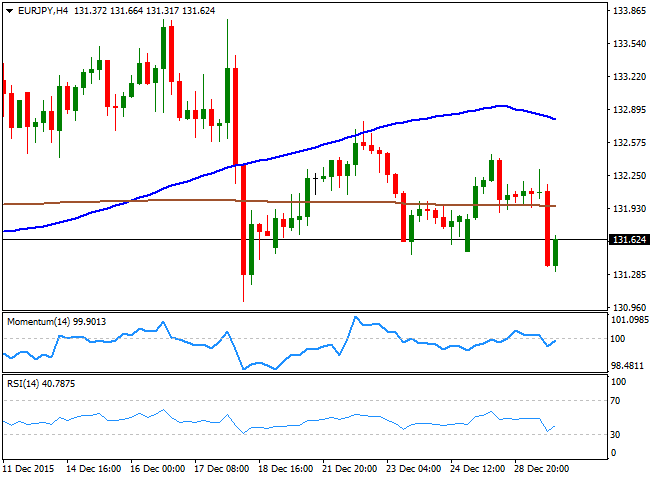 The EUR/JPY edged lower following EUR's self weakness, as the Japanese yen remained muted across the board. The pair fell down to 131.31, its lowest since December 18th, and the daily chat shows that the bearish tone remains firm in place, as the price continues extending below a bearish 100 DMA, currently around 133.60, and the line in the sand for the dominant trend. Shorter term, the 4 hours chart shows that the price has accelerated its decline after breaking below a 100 SMA, but managed to bounce from the mentioned low. In the same chart the Momentum indicator hovers directionless around its 100 level, while the RSI indicator has bounced from oversold levels, but remains in bearish territory, suggesting the dominant trend is far from over. 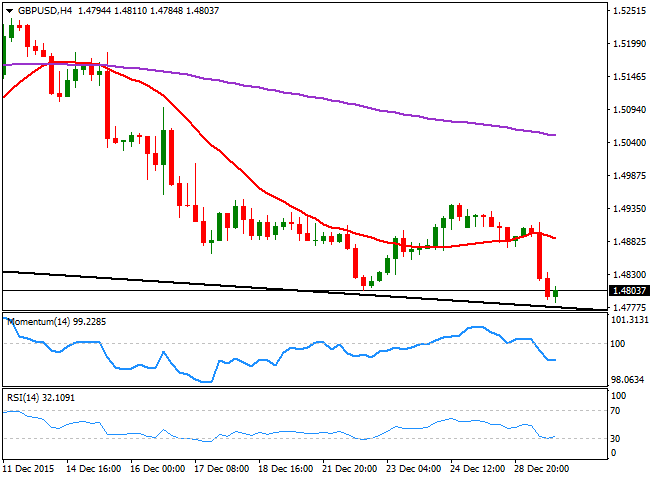 The British Pound fell down to a fresh 8-month low of 1.4784 against the greenback. Once again, there was no clear catalyst behind the move, except by the extension of the dominant bearish trend, as there were no fundamental releases in the UK and the decline took place before the release of better-than-expected US consumer confidence. The daily decline reached the base of the descendant channel in which the pair has been developing since  mid September, and the risk remains towards the downside for the upcoming sessions, although choppy trading will prevail until next week. As for the technical outlook, the 4 hours chart shows that the price is well below a now bearish 20 SMA, while the technical indicators have lost their bearish strength, but turned flat near oversold levels, rather consolidating than suggesting an upward move ahead. Renewed selling interest below the mentioned low, should see the pair extending its decline down to the 1.4700 figure, en route to 1.4562, this year low. 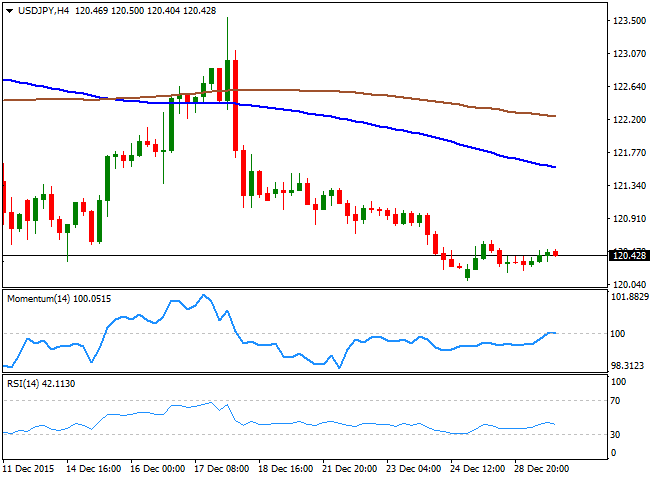 The USD/JPY pair has remained contained within  a 25 pips' range this Tuesday, having been unable to react to US data releases. The pair maintains the negative tone seen on previous updates, although the Japanese yen will have a hard time strengthening beyond the 120.00 level against the greenback, a critical psychological level.  Anyway, the pair will likely remain on hold until the release of the latest US  Nonfarm Payroll report early January. In the meantime, the 4 hours chart shows that the moving averages have accelerated their declines well above the current level, while the technical indicators lack directional strength within neutral territory, all of which should at least keep the upside limited. Sellers will likely contain rallies between 120.70 and 121.00, while a clear break below 120.00 is required to confirm additional short term declines, towards the 119.60 price zone. 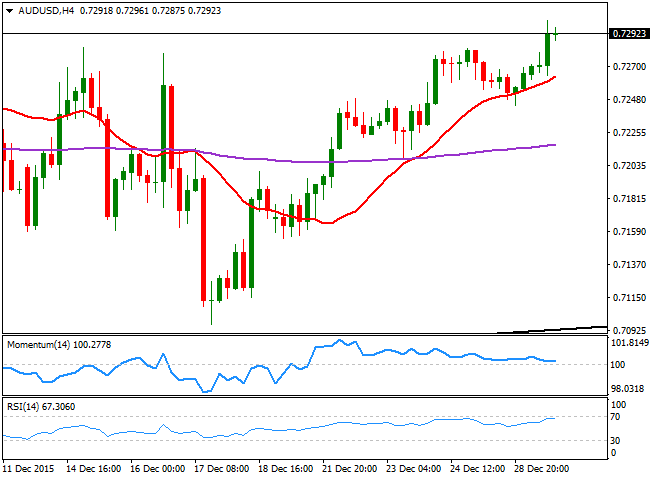 The AUD/USD pair traded as high as 0.7300 this Tuesday, hovering a few pips below the level ahead of the Asian opening. The Aussie got support from a recovery in base metals at the beginning of the day, the pair stands at its highest in three weeks, although price action has remained confined to a 60 pips range ever since the week started. Still trading within a symmetrical triangle, the AUD/USD pair presents a generally bullish tone in the longer term, and despite the lack of momentum, the shorter term outlook also favors the upside. In the 4 hours chart, the price has managed to advance above a bullish 20 SMA, while the Momentum indicator is aiming slightly around its 100 level, and the RSI indicator consolidates near overbought levels, in line with the longer term tone. The top of the mentioned triangle stands at 0.7365, for this Wednesday, and if the level is reached, it will likely attract some intraday selling interest on a first attempt of breaking higher, although a break below it should signal  a continued advance towards the 0.7620 region during early January.