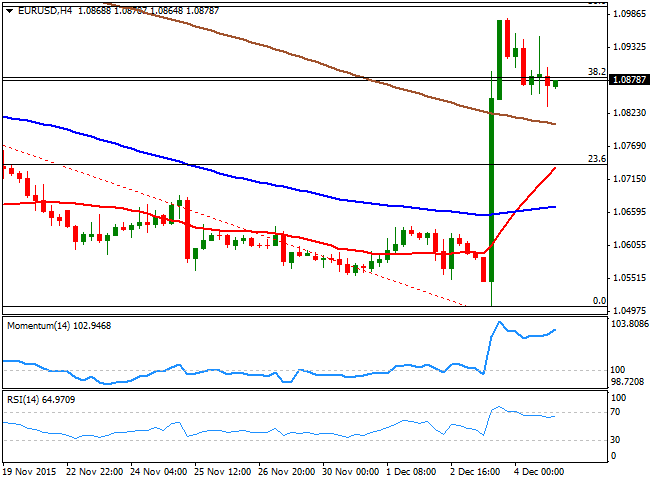 The release of  US Nonfarm Payrolls last Friday, failed to motivate EUR traders, and the EUR/USD pair closed the week around 1.0880, the pre-news level and the 38.2% retracement of the 1.1494/1.0505 decline. According to official data released on Friday, the US economy managed to add 211,000 new jobs in November, surpassing expectations of a 200K advance, while the unemployment rate held steady at 5%. Market was neither able to react to Draghi's words, as the ECB president spoke in New York, remarking that the ECB will continue to work to achieve their inflation target, but its concerns about persistently low core inflation.

Overall, investors were unable to shrug of the shock  produced by the European Central Bank on Thursday, by offering a soft extension of its QE after all  of the two previous months jawboning. Dollar sell-off at a time when the currency was long-term overbought against its European rival, resulted in a technical correction, given that the pair trades at the 38.2% retracement of its  latest decline, yet the strength of the move and the fact that the greenback was unable to gain on a good Payroll, suggest pair may continue rallying this week. In the 4 hours chart, the pair is well above its moving averages, while the technical indicators have resumed their advances near overbought readings after a limited corrective move, supporting and advance towards the 1.1000  figure, with a break above it supporting an upward continuation towards the 1.1120 level. 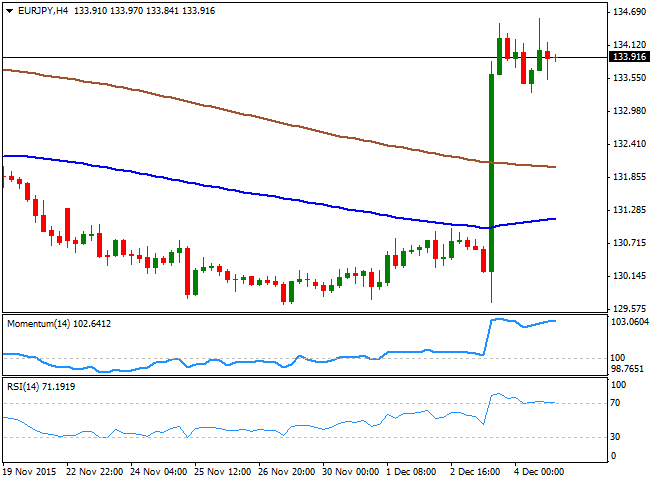 The EUR/JPY closed the day flat around 134.00, but with weekly solid gains, up to levels not seen since mid October, amid EUR sudden recovery following the latest ECB meeting. The Japanese yen was pretty neutral after the release of US employment data, helping the pair to hold near its weekly high of 134.58. Technically, the daily chart shows that the pair is still unable to advance beyond a mild bearish 100 DMA, offering an immediate resistance around the mentioned high. In the same chart, the technical indicators have lost their upward strength, but remain well above their mid-lines, suggesting some consolidation ahead. Shorter term, the 4 hours chart shows that the technical indicators are aiming higher, despite being in overbought territory, whilst the pair has met buying interest on dips down to 133.30 the level to break to confirm a deeper downward corrective move. 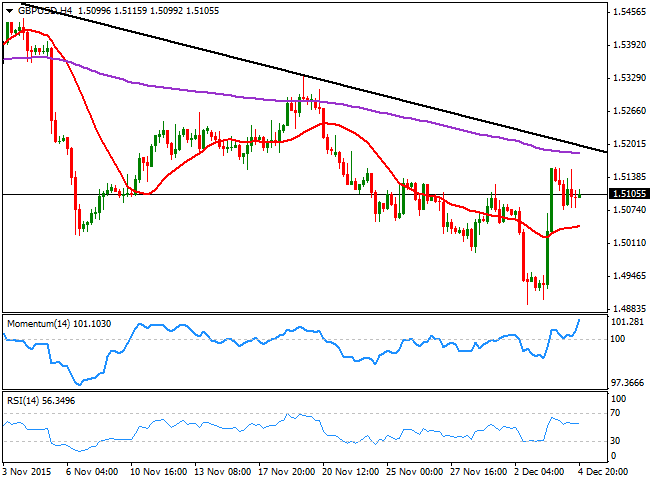 The GBP/USD pair eased partially on Friday, correcting its Thursday's advance on broad dollar's weakens. The Pound however, has lost its charm  on weak data released last week, pointing for a tepid economic advance in the UK and therefore diminishing chances of BOE's tightening at the beginning of 2016. The pair presents a bearish tone in its daily chart, as the price has been unable to extend beyond a bearish 20 SMA, capping the upside around 1.5140, while in the same chart, the technical indicators have turned south below their mid-lines, after correcting oversold readings. In the 4 hours chart, the price has been consolidating above the 20 SMA, but below a daily descendant trend line coming from November high of 1.5496, around 1.5170 for this Monday, while the technical indicators present a generally positive tone that should keep the downside limited as long as buyers keep surging on retreats towards the 1.5050 region. 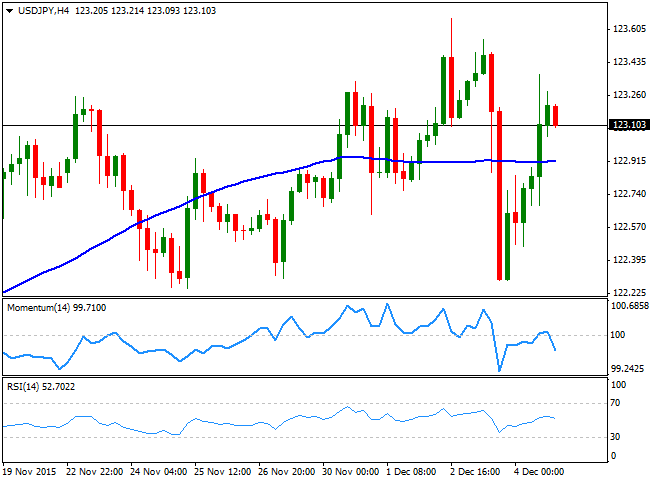 The USD/JPY pair extended its consolidative range around the 123.00 figure for one more week, with investors waiting for the upcoming FED meeting before establishing long term positions in the pair. Better-than-expected US employment data helped the pair close in the green on Friday, but the pair stalled short from the top of its recent range. Technically, the daily chart shows that the pair trades in a well-defined range between 122.20 and 123.75, holding above its 100 and 200 DMAs, but with the technical indicators heading nowhere in neutral territory. Shorter term, the 4 hours chart shows that  the price is holding above its moving averages, but that the technical indicators have turned lower around their mid-lines, increasing the risk of a bearish movement for this Monday, to be confirmed on a downward acceleration below 123.00. Nevertheless, buyers are expected to keep surging on approaches to the base of the mentioned range at 122.20.

The  Aussie closed at its highest in seven weeks against the greenback at 0.7337, having been buoyed ever since the week started. The Australian currency has found support on improved GDP figures for the third quarter, following a not-so-dovish RBA earlier last week. A recovery in gold prices has also helped the AUD/USD advance last Friday, with the pair now holding near a key long term resistance area between 0.7380 and 0.7410, and looking poised to extend its rally. Technically, the daily chart, shows that the price has advanced strongly above a bullish 20 SMA, while the technical  indicators consolidate well above their mid-lines. In the 4 hours chart, the 20 SMA continues leading the way higher by attracting buyers on pullbacks, although the technical indicators have lost upward strength and lack directional strength around their mid-lines. Nevertheless, the upside is favored on sentiment rather than technical studies, with a daily close above 0.7450 confirming a longer term advance.