US markets are closed for the Martin Luther King Jr national holiday with only a little FX trading. Banks and government offices are closed but the big banks will have skeleton trading desks.

Tomorrow the Senate holds hearings on the confirmation of Yellen as TreasSec, and Wednesday is Trump's last day in office and Biden's first. We already have the Day One agenda, eight initiatives to start reversing some of the worst Trump orders. It's interesting that China doesn't get mentioned as the Trump gang continues to add the names of Chinese companies to the banned list.

China is the only world economy to post positive growth in 2020. Q4 got 6.5% q/q, even if the full year is only 2.3%. The US is expected to contract by 3.6% and the eurozone, by 7.4%, according to the World Bank. Bloomberg reports Nomura suggests China could surpass the US as the largest world economy by 2028. Also, "Economists expect China's GDP will expand 8.2% this year, continuing to outpace global peers even as they begin to recover due to a roll-out of vaccines."

It's too soon to say, but it looks like the Biden administration will be slow to act on the Trump China measures. Tariffs clearly didn't work and banning US companies and persons from doing business with some Chinese companies is wildly contrary to free market principles, but at a guess, Biden will consult with the UK, Japan and the EU to come up with a plan for dealing with China's "predatory" behavior. 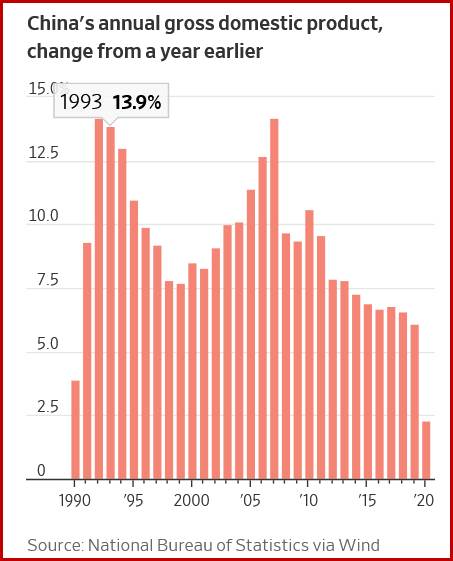 The dollar's mysterious strength is attributed to reports that Yellen will affirm the decades-old US policy of "let the markets decide," something TreasSec Rubin said so often it was considered a mantra. He said "A strong dollar is in the US' best interests," but it was meaningless because there were no policy initiatives to strengthen the dollar. None, zero. Rubin got the effect he wanted without lifting a finger, demonstrating the power of rhetoric.

We find the Yellen explanation for the dollar's recovery hard to swallow, since the dollar was already rising before the statement. Trump's calling for a weaker dollar demonstrably did not work. The US Treasury and Fed have not intervened sine the last big yen crisis, unless you count the near $1 trillion lent to European banks during the 2008-09 crisis (and nobody counts that as "intervention"). In other words, cause and effect are being manufactured out of whole cloth.

The only probable cause of dollar firmness is rising yields and expectations of additional rises. As noted on Friday, some throw out wild numbers like 1.50%, while more cautious forecasts see only 1.20% as a peak. Let's divide and come up with 1.35%. Assuming other major bond markets go negative (UK) or stay negative (Japan, eurozone), this is a currency advantage even when it is a negative real return. Like equities, it's the only thing in town that offers a return, however lousy. That means the dollar pushback could grow legs, especially with big players still paring short positions and a boost from the deficit hawks. We come to this deduction reluctantly.

Biden is turning out to be the opposite of bland and boring, at least so far. The US political scene can still provide the FX market (and others) with reasons to position one way or the other.

Tidbit: The FT reports the European Commission is about to introduce new polices that will reduce the role of the dollar in international transactions—because of all the trouble they went through creating an alternative payments system for Iran after Trump imposed sanctions. Talk about locking the barn door after the horse has run away.

The EC also plans to tighten "policing of foreign takeovers using the EU's new system for screening foreign direct investment." This is to prevent the acquired company to abide by non-EU rules, including sanctions. The draft of the policy initiative calls for the EU " to find ways of boosting the role of the euro in light of lessons learnt from the Covid-19 pandemic. The paper warns that ‘global financial markets are too reliant on the US dollar to cushion financial tensions and stability risks.'

"Specific steps set out in the paper include using a planned review of EU regulation of financial benchmarks to encourage them to be denominated in euros. Most are based on dollars." The EC can't do much about crude oil ,but the euro-based gas "contract traded in Amsterdam is fast emerging, and hydrogen as markets where the euro's role should be developed."

In finance, the EU is overly dependent on non-EU banks which can fly away at whim, and oh, yes, "Other parts of the paper reiterate the EU's ambitions to be more independent of UK financial-market infrastructure after Brexit — notably UK-based clearinghouses."

It's hard not to be sarcastic about a policy initiative now, especially in the context of Brexit.

Politics: The drama is not entirely over. Who will Trump pardon and when? Yes, he can pardon the hundreds arrested in the Jan 6 mob attack on the Capitol. He intends to reside at Mar-a-Lago but had signed a contract with the city not to reside there, so yet another lawsuit is in the cards.

On Saturday, the NYT reported a Pew survey showing Trump departs an approval rating of 29%, an all-time low. Golly, why is it not zero? "About 75 percent of the public said Mr. Trump bore some responsibility for the violence and destruction of Jan. 6, which put the lives of the vice president and members of Congress at risk and resulted in five deaths, according to the survey." This likely means he remains a pariah.

We have worries beyond Trump. Suspicion is strong that some members of Congress gave tours and maps to the rioters, which is treason by any definition. Late yesterday it was announced that the National Guard itself was being vetted individual by individual for any evidence of intent to sabotage; what a shameful thing to have to do. Many analysts worry about a resurgence in far-right mob violence as time goes by, since you can't keep tens of thousands of guards everywhere all the time.

On the whole, it appears that what passes for leadership of this motley collection comes from the white supremacy fringe, something that has been around for over century and is not going away now. What the Jan 6 riot showed is that this gang can hold for only a few hours. It remains to be seen whether there is any legal basis to wipe it out. After all, the First Amendment allows free speech.

The defenders of the First Amendment seem to have forgotten that hate speech is an exception. Someone who shouts "fire" in a crowded theater and sets of a deadly stampede has committed a crime. That person is banned from the theater, too. That's what Trump impeachers are hoping for—punishing him for inciting a riot against the elected government and banning him from public office. Banning takes only a majority of votes and looks highly likely. At the same time, it would deprive Trump of his government pension and other perks, like Secret Service guards forever.