Now that hysteria over a looming recession has abated, we can look more reasonably at this week's data, although it doesn't begin until Wednesday with March CPI. Nobody is forecasting a change of any size. We also get the Fed minutes. Thursday brings PPI and Friday, the preliminary University of Michigan April consumer sentiment index. There is no game-changer in here.

There's probably a game-changer for sterling in the works. April 12, the current deadline for Brexit, is this Friday. Traders are still buying the pound on the assumption that May gets a longer extension to June 30 or perhaps even longer, if the EU decides to shove it down the UK's throat.

But potential game-changers are not missing entirely. The WSJ warns that this weak the earnings season starts in earnest, and it may not be pretty. See the chart. Just about every sector is expected to show a drop, and the stock market can freak out over that. In the background is a nagging worry that Ray Dalio might be right—as he said on "60 Minutes" last night, income inequality is a national emergency. 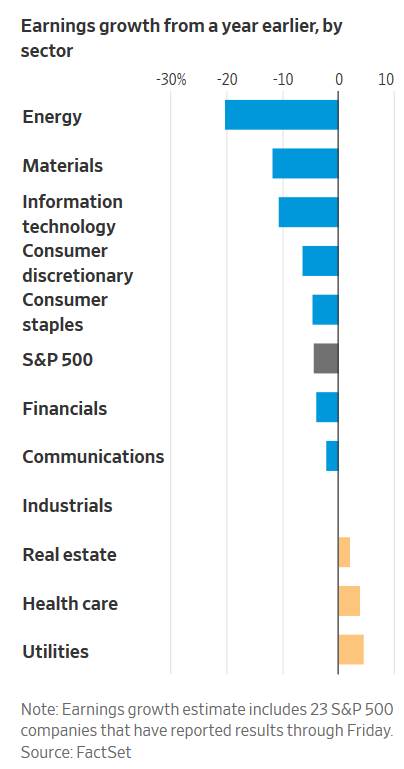 If we can spot a theme emerging, it might be that central bank independence is being eroded and not just in the US. If we get a low inflation number this week, more Trumpian calls for a rate cut will probably ensue. At some point opinion will start swinging toward accepting political interference with the central bank. According to a Bloomberg story, this is a big worry at Fitch Ratings, and we agree. Unconventional ideas are gaining sway now that the global economy is slowing and central banks have run out of tools.
This opens the door to "modern monetary theory" which is utter BS but appealing to the uneducated on both the left and the right. Be very worried when a socialist Congresswoman agrees with Trump. The proponents of MMT say, among other things, that governments can issue as much paper money and sovereign debt as they like to goose the economy without regard for the inflation mandate. Bloomberg notes that in the UK, Labour would like to see the BoE start including a "productivity target." Stay tuned. MMT has the potential to blow up in some spectacular ways The supposed "synchronous global slowdown" is actually true and visible to some extent. We may have put too much weight on PMIs in recent years as the top leading indicator, but it's a fact of life. And the PMIs are fairly grim. Gittler at ACLS offers one of his splendid charts and try not to fall off your chair. This one shows Germany way off in the failing corner. We'd like to know how Mr. Draghi feels about that. 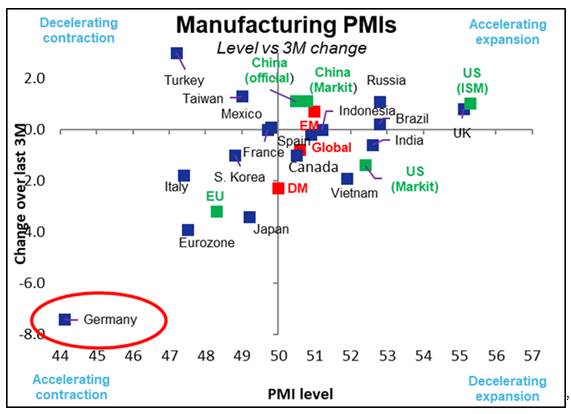 The Fed is also under attack from Trump's dual goal of disruption and acquiring lackeys in high office. Pundits are coming up with excuses for why it's okay for Trump to nominate thoroughly unqualified and dingbat candidates to the Fed board, Moore and Cain. The reasoning is that it's the behind-the-scenes staffers who do the real work and get the credit for the Fed's reputation for analytical excellence and policy soundness among the public. Not so. Those in a position to get press headlines have tremendous influence over public perception. Just imagine if Cain started getting a lot of spotlight time and brings up the gold standard. Out of the woodwork would come every crackpot and there's more of them than we might think.

Geo-political risks abound, although it's not clear any of them are going to affect the FX market this week. First up is Brexit. Criticism is starting to swing away from May to the Tory party for not being able to get its act together, forcing May to make nice with Corbyn. Recent photos seem to show Corbyn took a bath. Then there's the Israeli election. We'd put a dollar on Bibi. Dem presidential candidate O'Rourke made a giant political mistake calling Bibi a racist. (The best candidate so far is the mayor from Indiana but will the voters go for a gay guy?)

In addition, the Trump administration is mismanaging to an even greater extent. Another cabinet member has "resigned," Homeland Security's Nielson, she of the policy of caging small refugee children and losing track of their parents. Trump is still blathering about closing the border, which really upsets the Chamber of Commerce, and demanding Mexico take responsibility for managing the hordes of Central American migrants massing on the border. Turns out that it's true in recent weeks a new horde showed up. Trump says the country is "full." We are suspicious of these hordes. Who is inspiring them? Who is funding them? This is not to dismiss awful conditions or the genuine desire to get out. But we don't believe in coincidence in a case like this. It's suspiciously convenient for the anti-immigrant folks that hordes are showing up right when Trump is seeking to divert Dept of Defense money to the border wall. This is unconstitutional when Article 1 gives the power of the purse to Congress—but runs smack into the president's emergency powers when there really are hordes.

As for US-Mexico relations, the WTO is holding a conference on Nafta in Mexico this week. Unfortunately, this doesn't pass the "So What?" test. Nor does the G20 meeting this week in preparation for the G20 summit in Osaka in June.

Then there's Venezuela, where the Russians have troops and Trump is too lily-livered to enforce the Monroe Doctrine that says the Western Hemisphere is the US sphere of influence. On Friday the Treasury imposed sanctions on some Venezuelan-owned shippers sending oil to Cuba, which of course reminds everyone of the failed Cuban invasion and later showdown at sea. The TreasSec is on the hot seat for another reason—he is the boss of the IRS commissioner, and both are Trump lackeys. Theoretically the TreasSec can instruct the IRS commissioner to disobey the order from Congress for Trump's tax returns.

And what about the China trade deal? Nobody knows. Economic advisor Kudlow told Bloomberg TV a deal is getting close, but the failure to get a summit date belies the puffery.

Then there's the strange case of the gold buying spree by China. Bloomberg reports China added gold to reserves for the 4th month by 11.2 tons in March, following of 9.95 tons in February, 11.8 tons in January and 9.95 tons in December. Bloomberg says China is both the world's top gold producer and consumer.

"Last year's bullion buying by emerging-market central banks was the most robust in a long time as countries diversified reserves, Ed Morse, Citigroup Inc.'s global head of commodities research, said in a Bloomberg TV interview on Monday. The bank's positive on gold, targeting $1,400 by year-end." Morse is smarter than just about anybody. Goldman Sachs agrees, expecting a rally to $1,450 an ounce over 12 months. "Governments worldwide added 651.5 tons of bullion in 2018, the second-highest total on record, according to the World Gold Council. Russia has quadrupled its reserves within the span of a decade amid President Vladimir Putin's quest to break the country's reliance on the dollar, and data from the central bank show holdings rose 1 million ounces in February, the most since November." Bottom line—a mess of disparate factors, perhaps none of which is big enough on its own to drive prices, but with a potential cumulative effect of creating fear of the future. We know what happens when fear gets the upper hand—risk aversion favors the dollar. It's getting about time for Trump to complain about that, isn't it?