The AUD/USD pair ends the week with modest losses, below 0.7100 but above the previous weekly low at 0.7005. The aussie has been quite resilient to the dominant risk-averse sentiment and the related dollar’s demand. The commodity-linked currency declined, however, after the Reserve Bank of Australia’s Governor Philip Lowe hinted an upcoming rate cut.  Speaking at the Citi Group annual investment conference on Thursday, Lowe said further monetary easing would support jobs growth and alleviate currency pressures, hinting a possible cut to a record low of 0.1%. Extraordinary monetary stimulus is no surprise to investors in the current pandemic scenario that put the world in recession.

The greenback appreciated the past week on the heels of risk-aversion, this last fueled by coronavirus-related concerns. US politicians continue to discuss a possible fiscal stimulus package, but failed to reach an agreement, despite US President Donald Trump said he is willing to increase the amount offered beyond the previous $1.8 trillion. Politicians in the US are playing a blame-game using the aid-package as an election tool.  Speculative interest has little hopes a deal will come before the US presidential election, that will take place next November 3.

Stock markets suffered these days amid a double whammy. Not only the US government delayed additional stimulus, but also the number of new coronavirus cases reached a fresh record daily high of 380K. The increase in Europe is the most worrisome, leading to restrictive measures in several countries. Governments keep trying to avoid full lockdowns, which will mean a tougher path to economic recovery.

In that particular front, Australia is doing much better than its overseas rivals, as the country has reported 20 new cases a day on average in the last couple of weeks.  Restrictive measures, however, remain in place in the Melbourne area, which is slowly moving out of its latest lockdown.

Another negative factor for the aussie came from news indicating that China has banned imports of Australian coal. Tensions between Canberra and Beijing started a couple of months ago when Australia joined an investigation on the origins of COVID-19.

Australian macroeconomic figures were mostly encouraging, as Westpac Consumer Confidence printed at 11.9% in October, above the 9.9% expected, although below the previous 18%.  Consumer Inflation Expectations in the same month improved to 3.4% from 3.1%. Also, the September employment report showed that the country lost 29.5K job positions, less than the -35K expected, while the unemployment rate ticked higher from 6.8% to 6.9% better than the 7.1% expected.

At the end of the week, the US reported upbeat Retail Sales readings, as sales jumped 1.9% in the month, much better than the 0.7% expected. The number gave mild support to the market’s sentiment, in detriment of the greenback. The preliminary estimate of the Michigan Consumer Confidence came in at 81.2 in October, beating the expected 80.5 and improving from 80.4.

For the days to come, the focus will be on Chinese data, as the country will publish Q3 Gross Domestic Product on Monday, alongside with Industrial Production and Retail Sales.

The RBA will publish the Minutes of its latest meeting on Tuesday, while the Australian Westpac Leading Index and the preliminary estimate of September Retail Sales will be out on Wednesday. At the end of the week, the focus will shift to the October preliminary PMIs estimates from the Commonwealth Bank.

The US, on the other hand, has quite a light macroeconomic week, with a speech from Federal Reserve Chief Jerome Powell scheduled on Monday and the Markit preliminary estimates of October PMIs to be out on Friday.

As said, the AUD/USD pair is down for the week, and at a brink of extending its decline. The weekly chart shows that it met sellers around a flat 200 SMA now battling to hold above a bullish 20 SMA. Technical indicators head lower within positive levels, with the Momentum extending its decline and approaching its midline. The RSI, in the meantime, holds around 53.

The daily chart offers a neutral-to-bearish stance, as the pair is trading around a bullish 100 SMA but below a bearish 20 SMA. The Momentum remains neutral, heading south around its midline, while the RSI is stable at 41, skewing the risk to the downside. 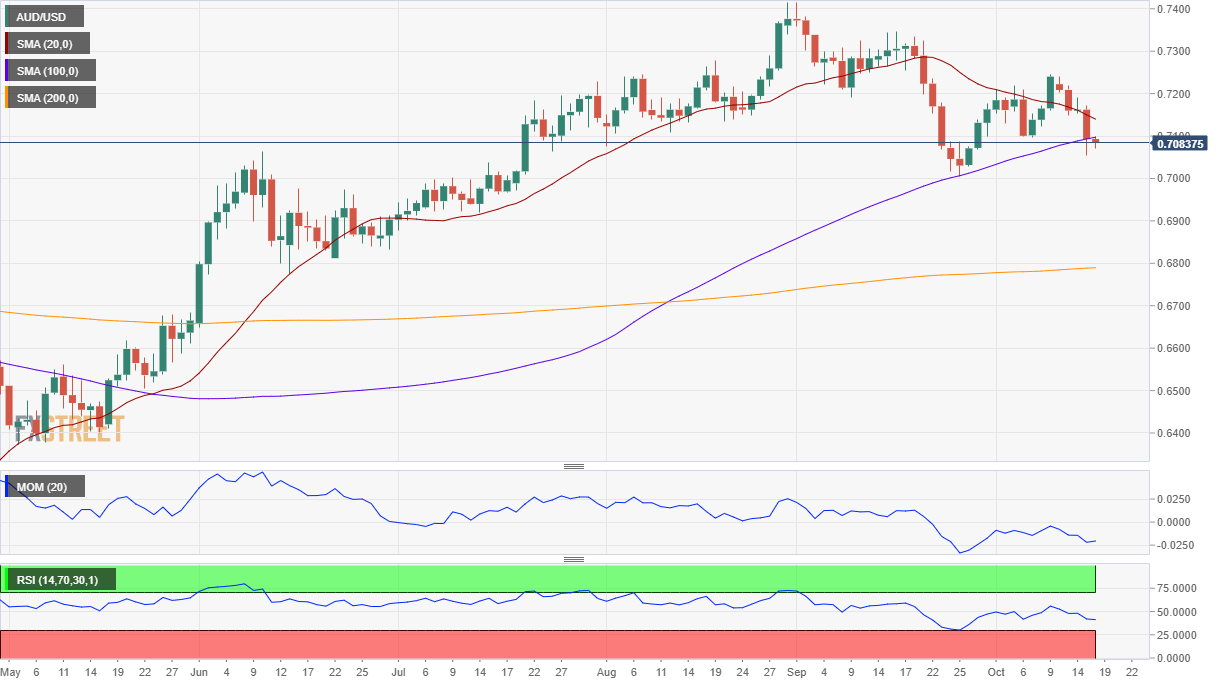 According to the FXStreet Forecast Poll, the AUD/USD pair could ese in the next few days, as the weekly perspective is dominated by bears, which target on average 0.7023. Market players favour aussie gains in the monthly and quarterly views, with the pair seen returning above the 0.7100 threshold.

The Overview chart, however, paints quite a neutral picture. Beyond the modest losses expected for the next week, the moving averages are flat in the monthly and quarterly perspectives, indicating little directional conviction. Worth noting that the number of possible targets below the 0.6800 is limited in all the time-frame under study.

EUR/USD Weekly Forecast: It’s no time to panic, but get ready just in case