The EUR/USD pair put a halt to its advance and closed the week in the red, around the 1.1700 figure. The decline was the result of a dismal market’s mood, fueled by different pandemic-related developments. There are high chances that the ongoing risk-averse scenario extends next week, as the issues continue to escalate.

In one hand, US Treasury Secretary Steven Mnuchin and House Speaker Nancy Pelosi have had different talks these days, but were still unable to agree. On Thursday, Mnuchin said that the White House wouldn’t let differences derail stimulus talks, while US President Donald Trump said that he would support a bigger stimulus package than the most recent offer made by the White House to Congressional Democrats of $1.8 trillion. House Democrats have passed a $2.2 trillion bill.

They are quite close, but Pelosi noted that testing is one of the main issues remaining in talks. The blame-game continues, and at this point, it seems unlikely they would be able to clinch a deal before the presidential election. A light of hope surged on Thursday, as US Senate Majority Leader Mitch McConnell said that they would pass a stimulus aid package after the election if they can’t get a deal with Democrats these days.

On the other hand, new coronavirus contagions have been rising exponentially in Europe. On Thursday, the Old Continent reported over 153K new COVID-19 contagions, with Spain, France, the UK, Italy and Germany reporting the most cases. Just France reported a record of over 30K new cases in one day. That led to a curfew in the country starting this Saturday, although several other countries are imposing tough restrictive measures. Financial markets are concerned these measures will further delay the already tepid economic comeback.

The market paid little attention to macroeconomic data, which was overshadowed by the ruling negative sentiment. Still, data has been worrisome, reflecting a slowing growth´s pace.

The German ZEW Survey showed that Economic Sentiment in the country contracted by more than anticipated in October, down to 56.1 from 77.4. The same applies to the Union, as the index shrank from 73.9 to 52.3. Meanwhile, Industrial Production in the EU advanced a modest 0.7% MoM in August, following a 5.0% gain in the previous month.

Inflation remains subdued in both shores of the Atlantic, as the EU and the US published their final versions of the September CPI, which came in line with the previous estimates, and well below the central banks’ targets.

On Friday, the US published September upbeat Retail Sales readings, as sales jumped 1.9% in the month, much better than the 0.7% expected. The number gave mild support to the market’s sentiment, in detriment of the greenback. The preliminary estimate of the Michigan Consumer Confidence came in at 81.2 in October, beating the expected 80.5 and improving from 80.4.

The IMF is set to meet over the weekend, and ECB’s President Christine Lagarde will participate in a panel discussion at the virtual G30 International Banking Seminar, although she is not expected to make relevant comments on the current monetary policy.

In terms of macroeconomic releases, the upcoming week will be quite light. The most relevant figures will be published on Friday, as Markit will publish the preliminary estimates of its October PMIs for the EU and the US. Also on Friday, US President Donald Trump and his Democrat rival, Joe Biden, will participate in their last presidential debate.

From a technical point of view and in the long-term, the risk of a steeper decline in EUR/USD is still well-limited. In the weekly chart, the pair continues to develop above a firmly bullish 20 SMA, which extended its advance above the larger moving averages. Technical indicators have turned south, but hold within familiar levels and far above their midlines.

Daily basis, the EUR/USD pair is neutral, as it has spent most of this week hovering around a mild-bearish 20 DMA, although the larger moving averages head firmly higher well below the current level. Technical indicators, in the meantime, hover within neutral levels, lacking clear directional strength.

The pair has an immediate and strong support level at 1.1680. A clear break below it exposes the 1.1600 figure, en route to the next relevant support level at 1.1520. The long-term trend will turn bearish if the pair breaks below the 1.1460/70 area, something quite unlikely at this point. 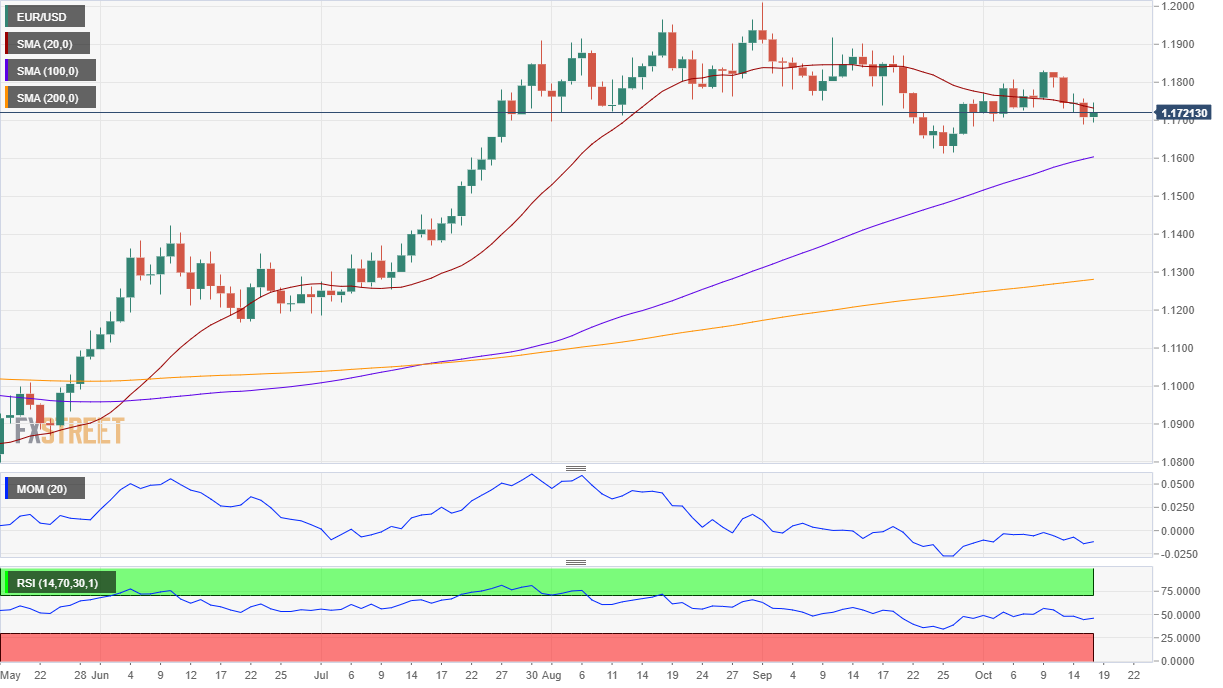 The FXStreet Forecast Poll for the EUR/USD pair indicates that the pair could extend its slump next week, as most polled experts are betting for lower targets, with an average target of 1.1698. However, bulls take over in the monthly and quarterly views. In both cases, bulls are above 50% and bears are in the 20% handle, eyeing levels well above 1.1800 by year-end.

The overview chart confirms some consolidation in the near term, followed by an increasing bullish potential, with a large accumulation of possible targets around 1.20.