The AUD/USD pair kept falling in the last few days, reaching a fresh multi-week low of 0.7248 on Friday, to close the trading week a handful of pips above it. Global stocks traded dully throughout the week, collapsing on Friday, dragging the commodity-linked currency down with them. The pair enjoyed a couple of positive days mid-week as Wall Street earnings season´s surprises underpinned indexes.

What’s behind the American dollar’s continued strength? There is nothing new moving financial markets. Ever since the pandemic started in March 2020, concerns have revolved around slowing economic progress. Once the world started seeing some relief, Russia invaded Ukraine, and the coronavirus returned to China. Supply-chain issues retook center stage roughly a month ago when Shanghai announced it will put under strict lockdown over 26 million people.

The decision has exacerbated the pandemic-related bottlenecks, which in turn fuel inflation levels. The Reserve Bank of Australia recently joined the hiking train, as in its latest monetary policy meeting, policymakers opened the door for a rate move. For the time being, the central bank is expected to hike some 40 bps by June. Still, it is way behind the US Federal Reserve, which is expected to push rates towards the 2.75%-3% range by the end of the year, another reason behind AUD/USD’s slide.

The aussie fared quite well with the Russian-Ukraine crisis, as higher commodity prices have provided support. However, as the crisis extends and the market prices in a long haul conflict, gold and oil prices have begun receding. The bright metal ended the week with losses at around $1,930 a troy ounce, after a failed attempt to regain the $2,000 level earlier this month.

Growth and inflation coming up next

Data wise, the macroeconomic calendar had little to offer in the last few days. Australia published the Westpac Leading Index, which printed 0.35% in March. The preliminary estimates of the S&P Global Manufacturing PMI printed at 57.9 in April, while the services index came out at 56.6. US indexes were xxxxxx

The US will release March Durable Goods Orders, foreseen up 1% MoM, and the preliminary estimate of the Q1 Gross Domestic Product, expected to post a modest 1% gain. By the end of the week, the focus will shift to the core Personal Consumption Expenditures Price Index, the US Federal Reserve’s favorite inflation measure.

Australia will release the Q1 Consumer Price Index, foreseen at 4.6% YoY, much higher than the previous 3.5% and a potential catalyst for an RBA rate hike. On Friday, the country will publish the Q1 Producer Price Index, which is expected to reach 4.2% YoY.

The AUD/USD pair is nearing the 61.8% retracement of the 2022 rally between 0.6966 and 0.7660 at 0.7233. The weekly chart shows that the pair has accelerated its slump below its 100 SMA, while the 20 SMA heads marginally higher around the mentioned Fibonacci support level. Technical indicators, in the meantime, head south within negative levels, with the RSI already below its midline, hinting at a steeper decline ahead.

The daily chart shows that, after failing to overcome its 20 SMA, the pair plummeted, and the indicator turned lower. The pair is also trading below a flat 200 SMA, while the 100 SMA heads marginally higher, a handle of pips below the current level. Technical indicators, however, head lower, almost vertically, nearing oversold readings, reflecting the ongoing slide and hinting at a bearish continuation. 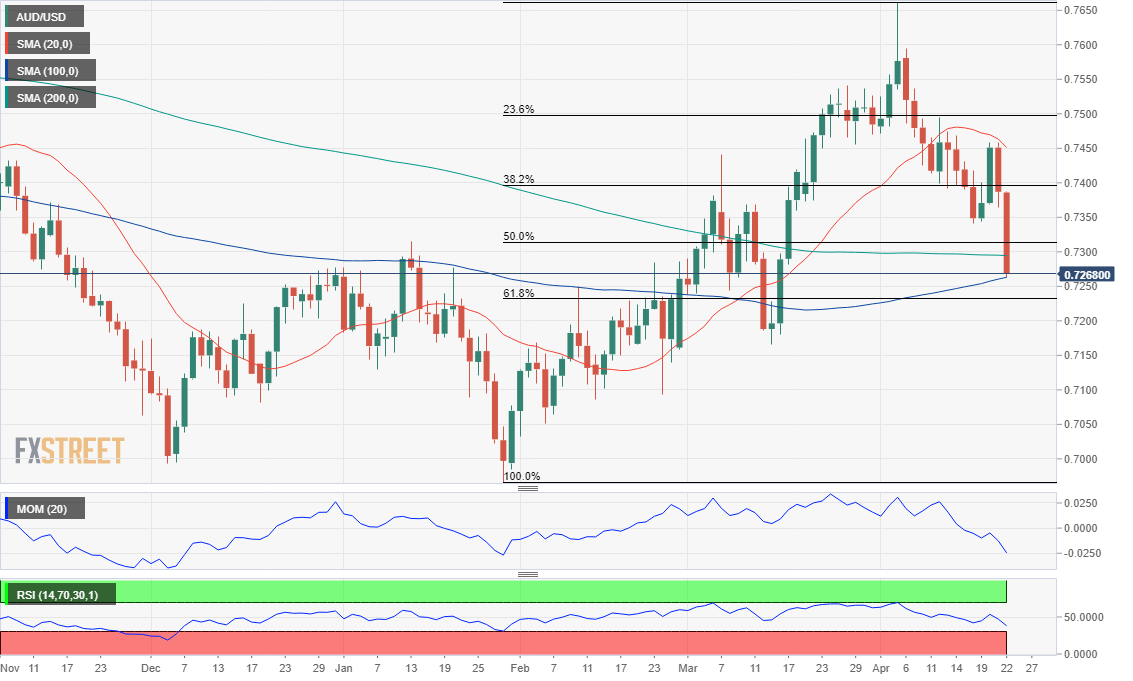 The FXStreet Forecast Poll indicates that AUD/USD could fall in the near term, but the longer-term views are still unclear as there’s just a minor advantage from bulls and the pair is seen seesawing around the 0.7300 figure for the most.

The Overview chart reflects the current negative sentiment, as the weekly moving average heads firmly lower. The one-month moving average is slowly turning south, but overall neutral, while the quarterly one is still flat.